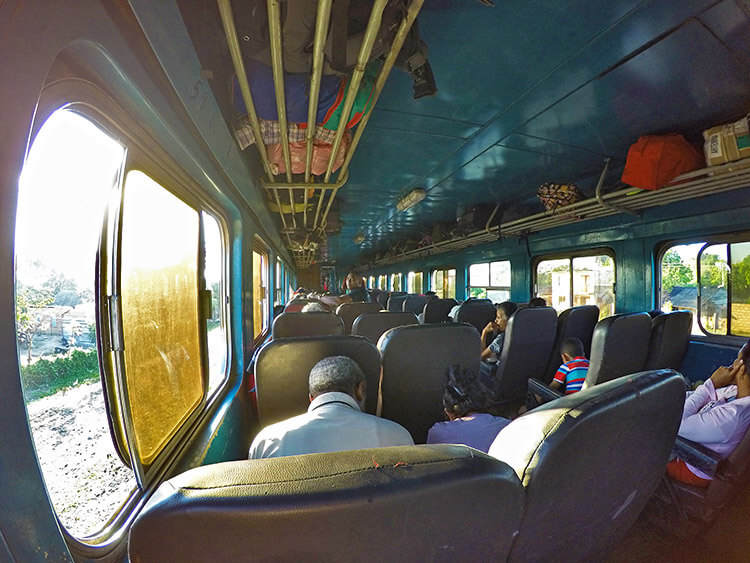 Whether you’re looking for an alternative mode of transport in Cuba, or you’ve left your bookings too late and planes and buses are full (like us), the train network in Cuba offers a unique experience that adds to Cuba’s already quaint characteristics.

And what an experience it is! Comfortable? Not really! On time? Definitely not! Authentic Cuba? Definitely! Worth it? Absolutely!

Regardless of how stinky the toilets are, how annoying the regaetton music is, or how long it actually takes compared to the ‘schedule’; train travel in Cuba provides a real eye opener to how Cubans travel across the country and is an experience well worth the surface-level difficulties.

Here comes the first challenge. Finding the correct train schedule in Cuba is about as realistic as the scammers in the street selling you real ‘original’ Cuban cigars!

If you do a quick Google search you won’t find anything official from Cuba, but you’ll come across a few websites that have listed some tentative schedules. However, even they’ll be the first to tell you, ‘take Cuba’s train schedules as nothing more than a guide’. 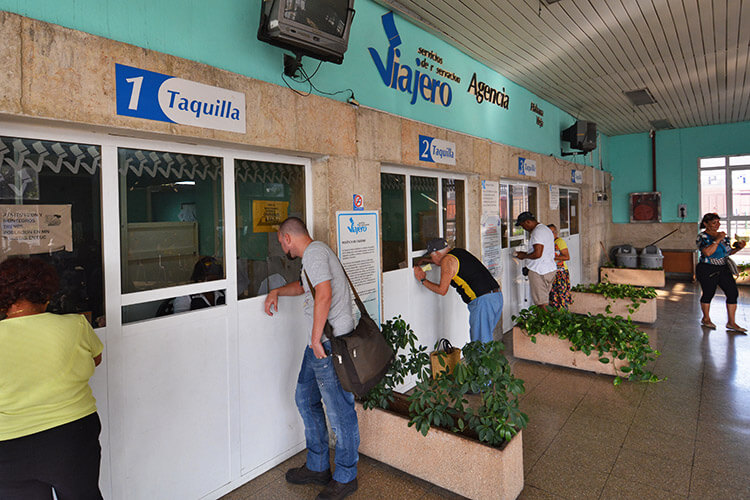 Train schedules in Cuba can change from month to month, making it hard to really plan ahead. If you’re thinking of a trip it’s always best to visit the station and see in advance before making too many plans. Which is exactly what we did with our train trip from Havana to Camaguey. Whether you’re leaving from Havana, or any other Cuban city, make sure to check in advance.

Taking a Train From Havana

In Havana the central train station is located in Habana Vieja (Old Havana), but that station is currently under renovation and not scheduled to reopen until at least 2018. In the mean time La Coubre, which is conveniently located right next door to the central station, is the alternative station for all trains leaving from Havana. 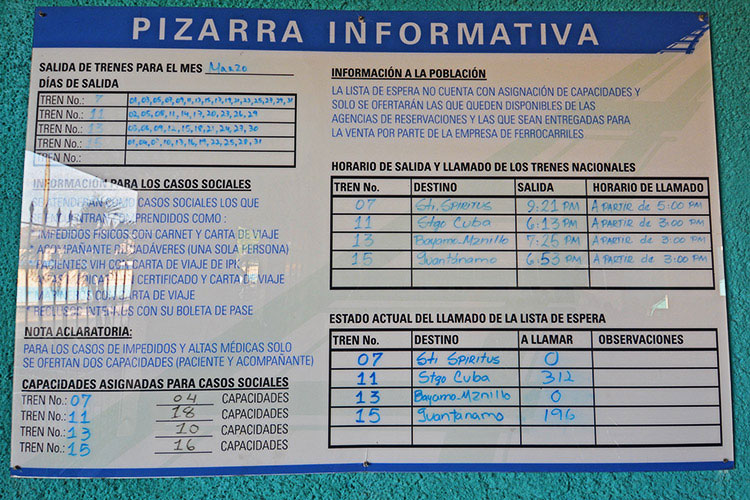 Above is a picture of the departures board for Havana in March 2016. What appears to be cryptic code is actually relatively easy to decipher upon further inspection. There are four trains departing, each with their own designated number and destination. Of those four trains each has their own specific departure days (most leave every three days), which correspond with the dates in the top left corner.

After you’ve worked out the trains you’ll need to find out which one actually stops where you want to go, then you can go back and figure out the date and time that it will leave.

For example, we were headed to Camaguey so we asked around to see what trains pass that station. For us the next available train that passed Camaguey was the Number 15 to Guantanamo. We then check the Number 15 schedule, saw it was leaving on the 28th of March at 6:53pm and booked our corresponding ticket. See, it’s easy! 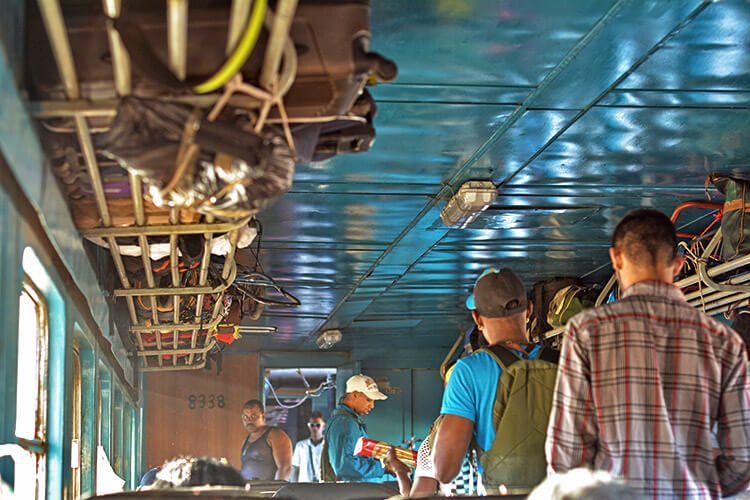 Traveling by Train in Cuba: The Experience

After eagerly anticipating if the train to Guantanamo would actually depart at its ridiculously precise time of 6:53pm, we weren’t surprised that it finally kicked off more than two hours later than scheduled.

While we weren’t too fussed about the delayed departure, the time spent waiting on board the train was unbelievably hot and stuffy. In all seriousness a doctor actually came on board at one stage to check on someone who had appeared to pass out only a few seats in front of us. Once they’d been given the all clear and received due medical attention (a few men waving homemade cardboard fans at them) it was time to hit the tracks! 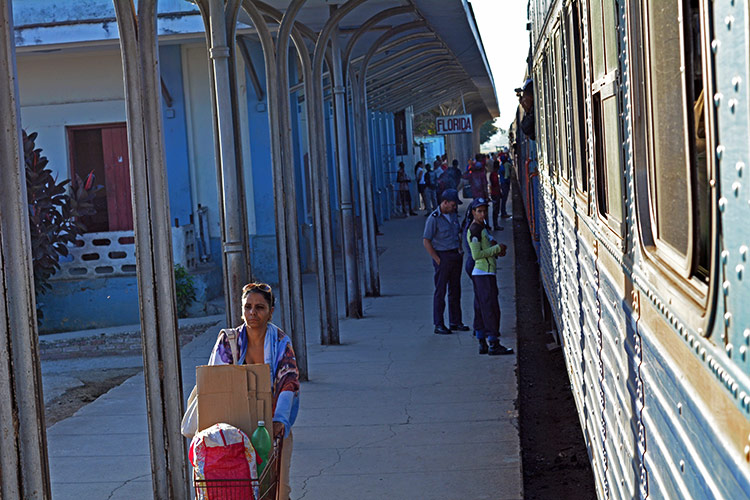 After a clunky start, the train finally settled into a rickety rhythm and the night air began to fill the carriages and filter through the suffocatingly thick air surrounding us. At this stage a couple of girls behind us thought the whole train might be interested in listening to some pumping regaetton tunes for the first couple of hours, but by midnight the train was pretty subdued.

As the train chugged away throughout the night any temporary periods of sleep were interrupted by frequent stops. For all the major stations, where you’re likely to be visiting, an attendant comes up and down the aisles to shout out the next spot. Don’t be worried about missing the call; they’ll be no chance of you sleeping through the actual stop as the train makes an ever so gracious clank and jolt, almost enough to throw you from your seat, every time it comes to a halt.

In the morning the vendors emerged from their slumber and begin to trawl the aisles hawking their wares. Anything from crackers and ham sandwiches, to slabs of cheese, milk powder and 40-watt light globes. As they paced the train we watched on in admiration of their perseverance. 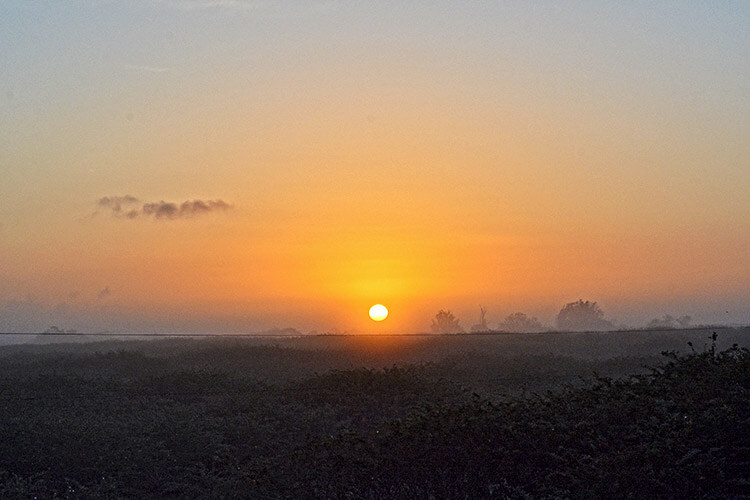 One of the best things about the train being so late, and taking twelve hours instead of the supposed eight, was that it gave us some daytime to view our surroundings. As the sun rose above the horizon, and shone its light on a new day, we got a look at Cuba’s beautiful countryside and small railroad towns that passed before our eyes.

Wide open fields and farms stretched as far as the eye can see. The occasional campesino (farmer) can be seen in the distance hacking away at some crops, or rounding up cattle. As the train passes some of the smaller towns you can see what a real Cuban town looks like without any tourist infrastructure in place. 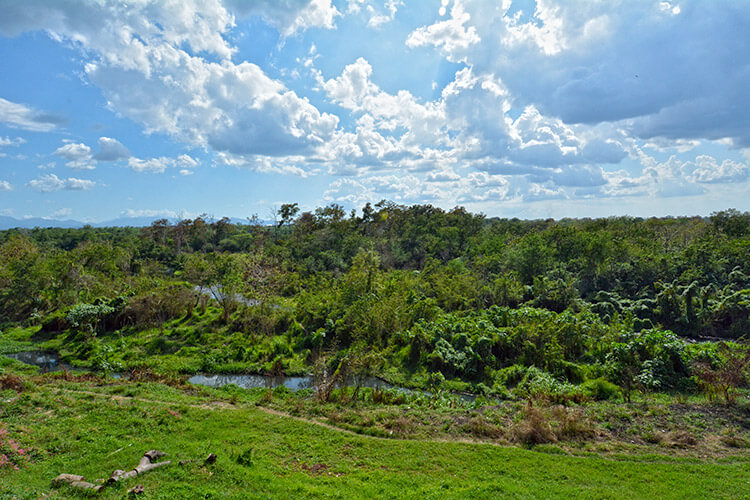 Traveling by train in Cuba is an experience that really accentuates the uniqueness of Cuba. It might sound like a bit of a mission, but experiencing life as a local is what makes traveling to Cuba so special. Sure you could pop aboard a nice air-conditioned bus or jump on a flight, but train travel in Cuba is about as authentic as it gets if you want to really see how the locals live. And for us, that’s what traveling is all about! 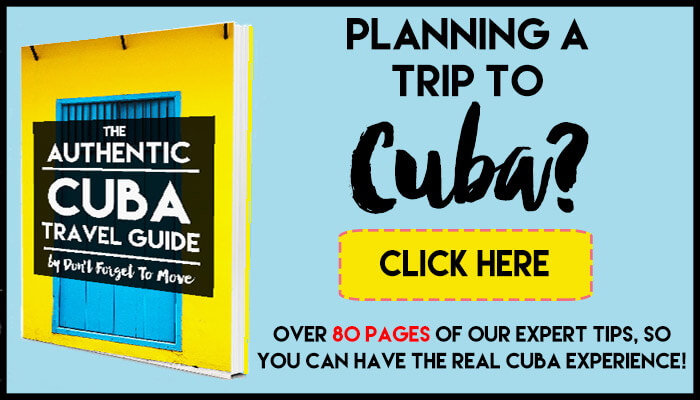 7 thoughts on “Train Travel in Cuba: A How to Guide”