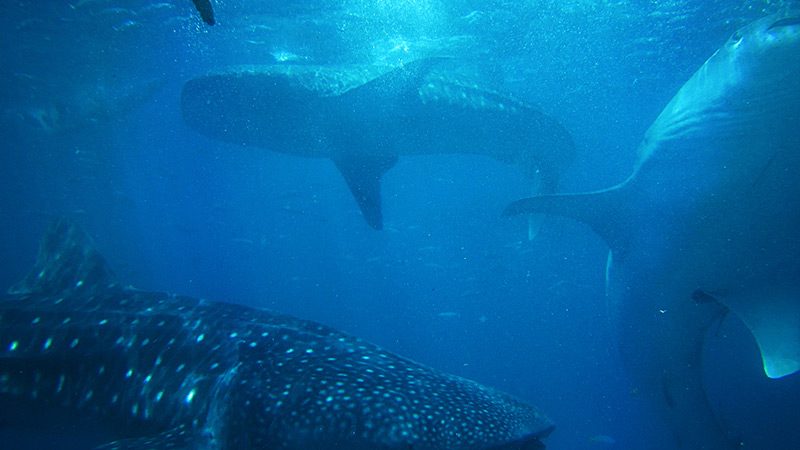 I look up from the boat and realize we’re a lot closer to shore than I thought. The gentle rhythm of the boat, combined with an early morning start, must have put me in a sleepy slumber. Christine gives me a gentle nudge and points in the direction of the eager onlookers. All the passengers on board have begun to gather around the left side of the boat, gazing at the masses of wooden paddleboats that are beginning to assemble in the water. We all begin to search the waters, hoping to get our first glimpse of the famous Oslob whale sharks. Most of the passengers on our boat are here to swim with the whale sharks, and in a short moment they too will join the hordes of tourists being shuttled in and out of the waters of Oslob. Unfortunately we will not be part of that group.

Don’t get us wrong, we’d love to be able to experience these majestic animals in their up close and natural habitat. In fact, when we first started planning our Philippines trip swimming with whale sharks was high on our bucket list. And that was a really tough list to make. Coming into this trip we were super excited about planning our list of things to do in the Philippines. We scoured the Internet, pulling apart every Lonely Planet forum and making our way through the masses of blog articles compiled by eager travelers and locals alike. From the thousands of options out there we barely managed to narrow it down into a list of ten. Of those ten choices one that really stood out was the incredible opportunity to swim with whale sharks in Oslob, Cebu. 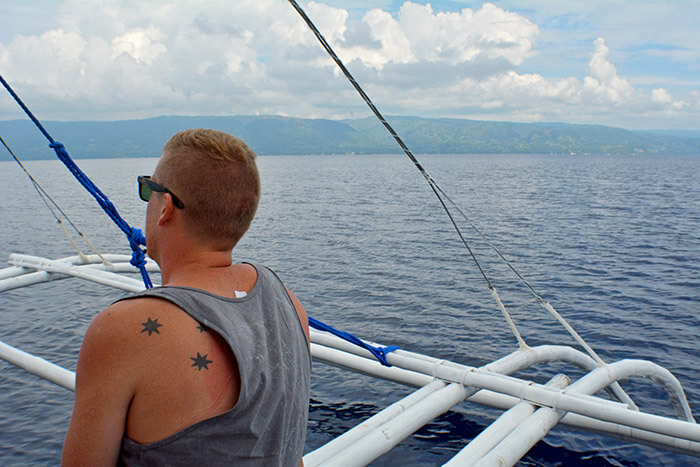 Years ago Christine was fortunate enough to come across a couple of whale sharks while diving in Honduras, which can be rare, and we’d heard it was pretty easy to replicate those experiences in Cebu. Pictures on the Internet did nothing but fuel our wanderlust. At the time however, little did we know about the potential affects that this could have on the famous whale sharks in Cebu. Like many animal tourist activities, there are always a number of factors to consider regarding animal welfare, sustainability and overall community impact. Having a swim with the whale sharks might sound like a fun idea, but it quickly turns from interesting attraction to animal exploitation if tourist interaction is impacting the species and it’s habitat.

Scene From the Whale Shark Tours in Cebu

When we were taking the boat from Bohol to Cebu we happened to dock at Oslob, so we were able to witness first hand the scene at the beach. Picture an area no bigger than a football pitch, about 50 odd meters from the beach and full to the brim with boats and people snorkelling around. From the surface we couldn’t get a full gauge on what was going on, but do a simple search and amongst the amazing whale shark selfies you’ll see pictures of people touching and holding onto the animals. It’s crowded and you don’t seem to get long in the pit. Tour guides roll you in and out at a rate to keep up with the continual flow of boats arriving, while feeding the animals to keep them attracted. Even seeing this was enough to make us feel confident we made the right decision, with the tour looking more like a zoo than an authentic nature exhibition. 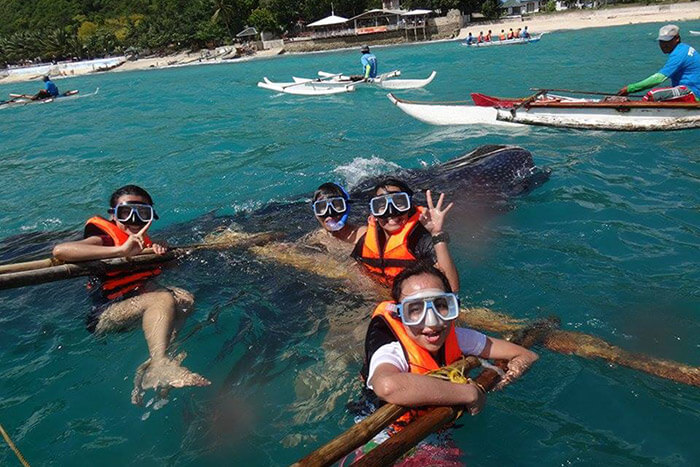 But we didn’t want to make a snap judgement based on our personal experience alone. We’re far from experts in marine biology so we decided to chat with actual marine biologists who could give us the scoop on whether this activity is detrimental to the animals. Here’s what we learned.

Want to find other ethical whale shark experiences while traveling? Check out our full guide to Swimming with Whale Sharks Around the World

The Impact on the Whale Sharks

Many international marine conservation organizations have spoken about the negative affects of the whale shark tours in Oslob. Reef-World, a UK based conservation group focussed in Southeast Asia, and their United Nations Environment Programme initiative Green Fins, have “come out against the tourism activities in Oslob, noting that the practice of feeding wildlife is unsustainable”. There are also many local initiatives in the Philippines that are working on monitoring and researching the whale sharks visiting Oslob. The Large Marine Vertebraes Project Philippines (LAMAVE) in particular is leading the way in research surrounding whale sharks in the Philippines. They also have the difficult task of juggling marine conservation, local community development, education initiatives and Philippine bureaucracy.

The official conservation status for whale sharks is ‘vulnerable and declining’, so now really isn’t the time to take a gamble on how much of an impact this tourist activity is having. A study conducted by marine biologists observing Oslob whale sharks supports this sentiment by stating, “poor and unregulated whale shark tourism can lead to short and potentially long-term impacts, like behavioral change and displacement from critical habitats” (Source). Some of these behavioral and habitat changes include:

The main reason the whale sharks visit Oslob everyday, and keep returning, is because they’re getting fed. Everyday fishermen attract the sharks to the site by feeding them one type of krill (uyap) that they purchase in bulk. Because of this the whale sharks are now spending up to 6 hours feeing in Oslob, losing out on some of the key nutrients that they gain from foraging naturally. With over a hundred different types of nutrients on offer the whale sharks are only getting a handful because of the lack of quality in their feed. Think of it like a human eating the same thing all day, everyday. One of the concerns is the affect this may have down the line with growth and reproduction.

Whale sharks are highly mobile animals, so by enticing the whale sharks to stay in one spot it is interfering with their natural movements and migration pattern (Source). One whale shark in particular has been known to stick around for over a year in Oslob. It’s still too early to tell the lasting affects of this, but marine biologists predict it could alter their breeding habits and ultimately their reproduction. Considering they’re a vulnerable species any risks with reproduction should be taken very seriously. 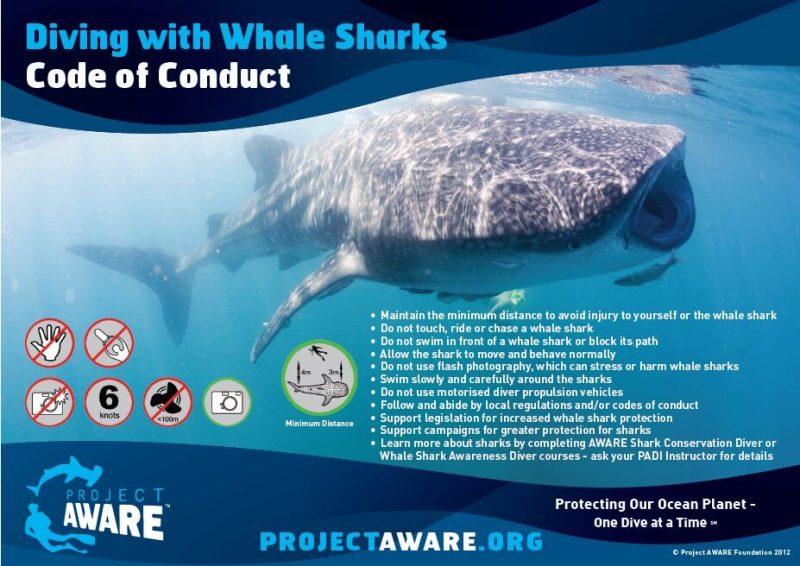 No Touching the Whale Sharks!

Although there are strict rules and regulations prohibiting interaction with the whale sharks, with several hundreds visits a day it’s inevitable that there’ll be some daily contact. Whale sharks bump into the boats and have evidence of cuts and scarring. Researchers have also reported that whale sharks now associate other non-tourist related boats with feeding, causing them to get injured when they come too close to motors and oars.

Along with that there is also the growing concern of increased tourist contact. As the popularity of the tours increases, so does the lack of compliance with local regulations and guidelines. For example, the 2 meter minimum distance of tourist to whale shark is very rarely enforced, with up to 97% of cases breaking the rule in 2014 according to a thorough research study (Source). This non-compliant regulation comes down to a lack of respect for the guidelines from not only the growing pressure on the tourism industry, but also the tourists joining the tours searching for that ‘ultimate selfie’.

What To Do Now?

As responsible tourism advocates we hope to inform and present a different side of the picture. By writing this article we’d love to see more tourists became aware of all the facts, so they can make an informed decision on their travel plans.

What we’re definitely not doing is asking everyone to suddenly stop visiting overnight. The affect this would have for the whale shark population dependent on the food, as well as the local population dependent on the income, would be disastrous. Rather, we’d like to hear more people talking about this and putting pressure on the tour agencies and local authorities to start regulating the industry more closely. Which should lead towards developing a strategy to ensure the safety and health of the whale sharks going into the future, as well as the education to tourists and locals alike. It won’t happen overnight, but as conscious travellers we can start to make changes slowly. Eventually, just like pressure on elephant riding tours and tiger temples in Thailand, there will be enough voice to support the issue.

Responsible Tourism in the Philippines

So if you shouldn’t swim with the whale sharks, what should you do? Luckily there’s no shortage of amazing responsible tourism opportunities to view marine life in the Philippines: like being able to swim with turtles on Apo Island only a couple of hours south of Oslob. And unlike the negative affects of the whale shark tours in Cebu, this activity actually supports marine conservation and provides alternative income for the old turtle fishermen who now work as guides. This is an observational activity, with strictly no feeding or touching, but was by far one of our best travel experiences from our six months volunteering and traveling around the Philippines.

And if you really had your heart set on seeing the whale sharks then there are always opportunities with reputable dive companies that see them in their natural habitat, without feeding. Other locations off the coast of Dumaguete, Donsol and Pintuyan are known for whale sharks in the right season. Pintuyan in particular, in Southern Leyte, is known for its responsible interaction with wild whale sharks. Our best suggestion is to do your research, which really depends on the time of year you visit the Philippines. After that get in contact with dive shops for further information and they’ll help you out.

So to everyone thinking about the tours, although you’re free to make up your own mind, we would strongly urge you to consider all factors before booking your tour. And if you were originally planning on doing this (remember we were also), it’s not that you’re terrible and want to destroy the whale sharks, it’s just often hard to really know all sides. Hopefully now you do.