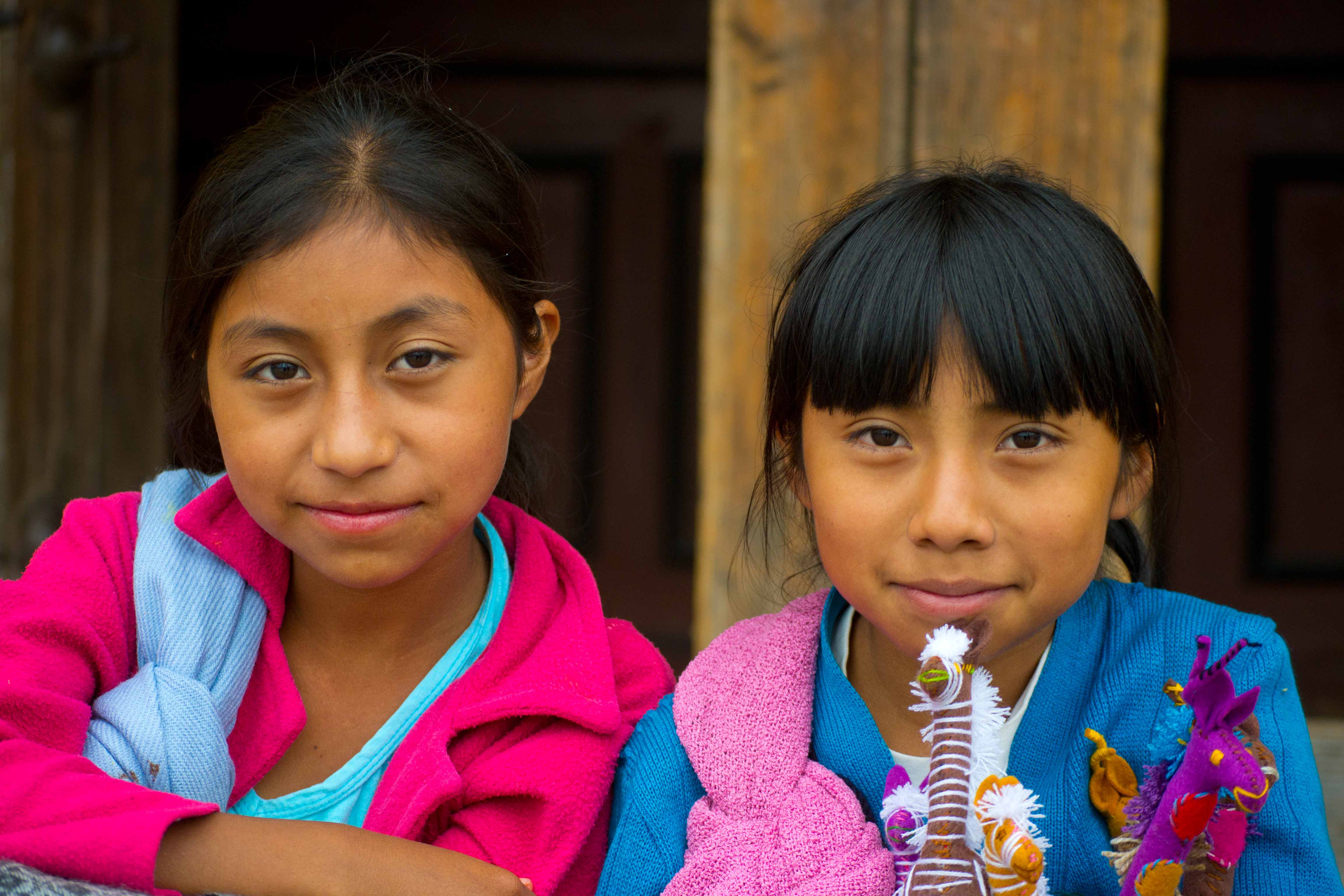 The alarm goes off at 7am and it’s straight out of bed. Even a snooze button won’t do much good in a house full of thirteen children if one person’s awake. School starts at 9am, but there’s chores to complete before Carolina can get out the door. She’s one of the oldest kids living at home, so there’s a lot to do in getting her younger siblings ready for the day.

Carolina is your typical 10 year old girl. She goes to school in the morning, enjoys hanging out with friends and she loves her family. However, she is also one of the hundreds of young street sellers of San Cristobal de las Casas, Mexico that hawk their wares after school, on weekends and holidays. Carolina, along with her brother Juan Carlos, eight, and her cousins Alfredo, nine and Emilia, eight, together form a group of friends that trawl the streets of one of Mexico’s busiest tourist destinations hoping to bring in some tourist money.

Over our 2 months in San Cristobal de las Casas we got to know their little group really well and would often find ourselves hanging out with them in the plaza and providing impromptu English classes. The kids were initially on the clock trying to sell us stuff, but after realising we just wanted to get to know them they quickly let their business guard down and opened up to us.

“Selling is fun, and we can play all day together” says Carolina as she jokes around with her best friend and cousin Emilia. The two girls share a strong bond that goes deeper than family. Together they front the sun and storms everyday to make sure they can pull in some much needed money for the family.

“I like school”, both girls comment after being asked. This is an encouraging sign, when so many youth street sellers of San Cristobal are working at such a young age. “When I grow up I want to be a primary school teacher, just like my teacher Sr. Luis”, Carolina adds to the conversation. She is the oldest of the group, and you can tell by her confidence that she is the leader of the pack. Emilia shyly responds to the same question, “I’m not sure what I want to do”. We reassuringly tell her that even at our age we don’t know what we want to do, and it raises her spirits. 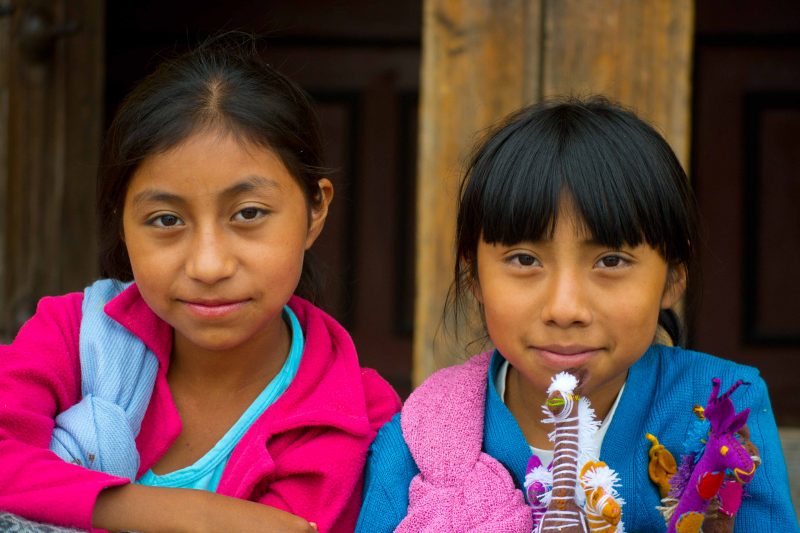 School is an important aspect for the children of Chiapas. Rating as one of the poorest states in all of Mexico, it’s crucial to know that the future of Mexico are being educated. A typical school days consists of maths, writing, reading, Mayan culture and history, and all classes are conducted bilingually in Spanish and the local Mayan language Tzotzil. Classes in English and computer studies are generally limited, but sometimes come in later years. Although in saying that, not many people can speak English beyond the basic phrases and numbers, unless they come from the upper class minority.

The conversation between the girls turns to their native indigenous language Tzotzil for a moment. Although the girls prefer to speak Spanish, they often find themselves coming back to their mother tongue. “We speak it at home with the family”, Emilia adds, “but that’s only because our parents know it better than Spanish”. This seems to be a common trend among the older generation of street sellers of San Cristobal. There is a strong presence of their indigenous Mayan roots, with a few different dialects around San Cristóbal alone and many more around the state of Chiapas. 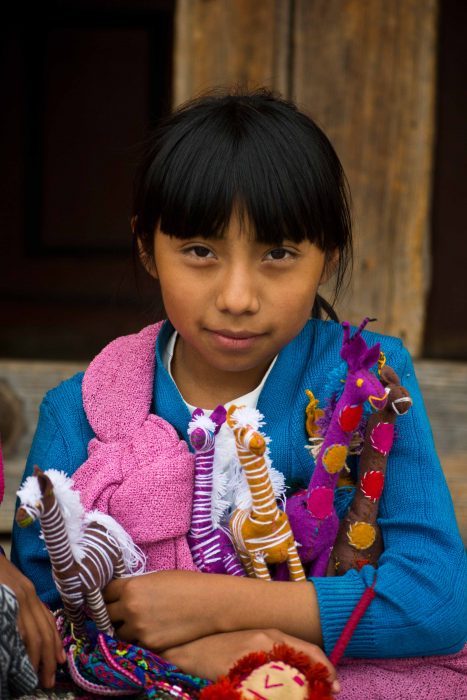 Both girls express their desire to pass on the Mayan traditions and will make sure to teach their families Tztozil as well. Although at the same time they are aware of the predominance of Spanish in the wider community. Carolina also adds that she is interested in learning English, stating that “it is important to make money in the future”. For Carolina this new skill will increase her ability to sell to foreign tourists who don’t speak Spanish.

The conversation continues for another half an hour as we talk about all kinds of things. From family and religion to more light hearted topics such as free-time activities and favorite music. As we had suspected, the girls don’t have too many after-school activities, because they’re always working. However, when they do get time they’re usually busy making the handicrafts and learning skills from their parents or books. That takes up most of their time, and when school finishes by 2pm it’s a quick trip home for some lunch and a relax before they hit the streets.

On an average weekday day the group will work for 4 hours until 8pm, depending on the weather, before they’re in bed by 10pm. On days off, such as weekends or holidays, they usually work from 12pm-6pm. All money earned goes directly to the family, and if they don’t make a sale there are no drastic consequences, they just have to head out the next day and try again. While we’ve heard some sad stories about what happens if the kids can’t sell, they assure us this is a non-pressured environment. 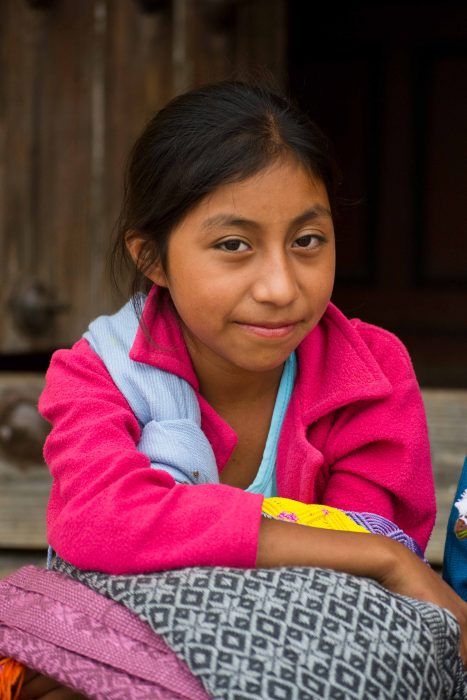 For the girls this is a long lined traditional from their foremothers, and their foremothers before that. Carolina is learning a family trade and tradition. She tells us she was learning how to make bracelets and stuffed animals by 5, and on the street selling them by 6. In those 4 years she’s walked up and down the main strip thousands of times, and if she follows in her mother and grandmother’s footsteps, she has many thousands of trips to go. It is only our hope that whether she decides to follow the family tradition or not, at least she has an opportunity at an education and the right to decide her future. She may be one of the lucky ones who even gets to finish her education, especially as a girl. For the boys, a lot of post-secondary work leads to a competitive career in construction. It’s a useful trade, but with so many unskilled laborers looking for work, it makes the competition a strain and leads many men to street vending as well. 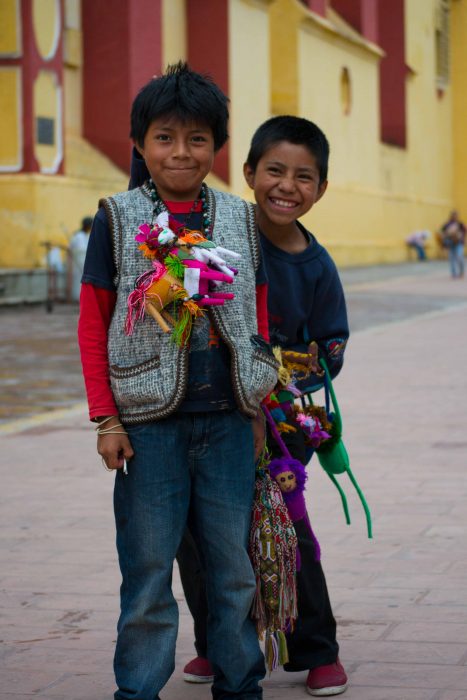 The family tradition for both Carolina and Emilia follows a similar path. The women are all in the textiles trade and the men in the construction trade. Both girls note that their brothers followed their fathers into work from a young age, and have been there ever since.

So what does the future look like for these two girls? “I’d like to travel more and get to know more of my country” says Carolina. While the two don’t have a lot of knowledge about what’s happening outside of Mexico, remember they are only 10 and 8, what kid does? Emilia wants to travel around Chiapas and also visit the beach for the first time in Oaxaca. And in the future future, that’s just too far away to think about. A family, some kids and then who knows is what they both seem to think.

For now their story ends and we bid goodbye to our new amigos. What we learned from Carolina and Emilia over our 2 months  is that they’re really just like any other 8 and 10 year old. Once the camera and notepad were away they continued to goof around, while the boys wrestled in the street. They’re street savvy and have grown up a lot faster than most kids back home. But in a world away from Facebook, computer and all that other stuff, they have stilled managed to hold onto their childhood innocence.

Just before we left we managed to print a few pictures from the group of our time together, and Christine was able to make a few simple bracelets for them. They shyly accepted the gifts, but once out of our site we could see them looking over the pictures as they discussed who got what. On the back of the photos we included our email address, in the hope that one day they could get in contact with us. While none of them had ever used a computer, they assured as they would try.

3 thoughts on “A Day in the Life: The Young Street Sellers of San Cristobal”