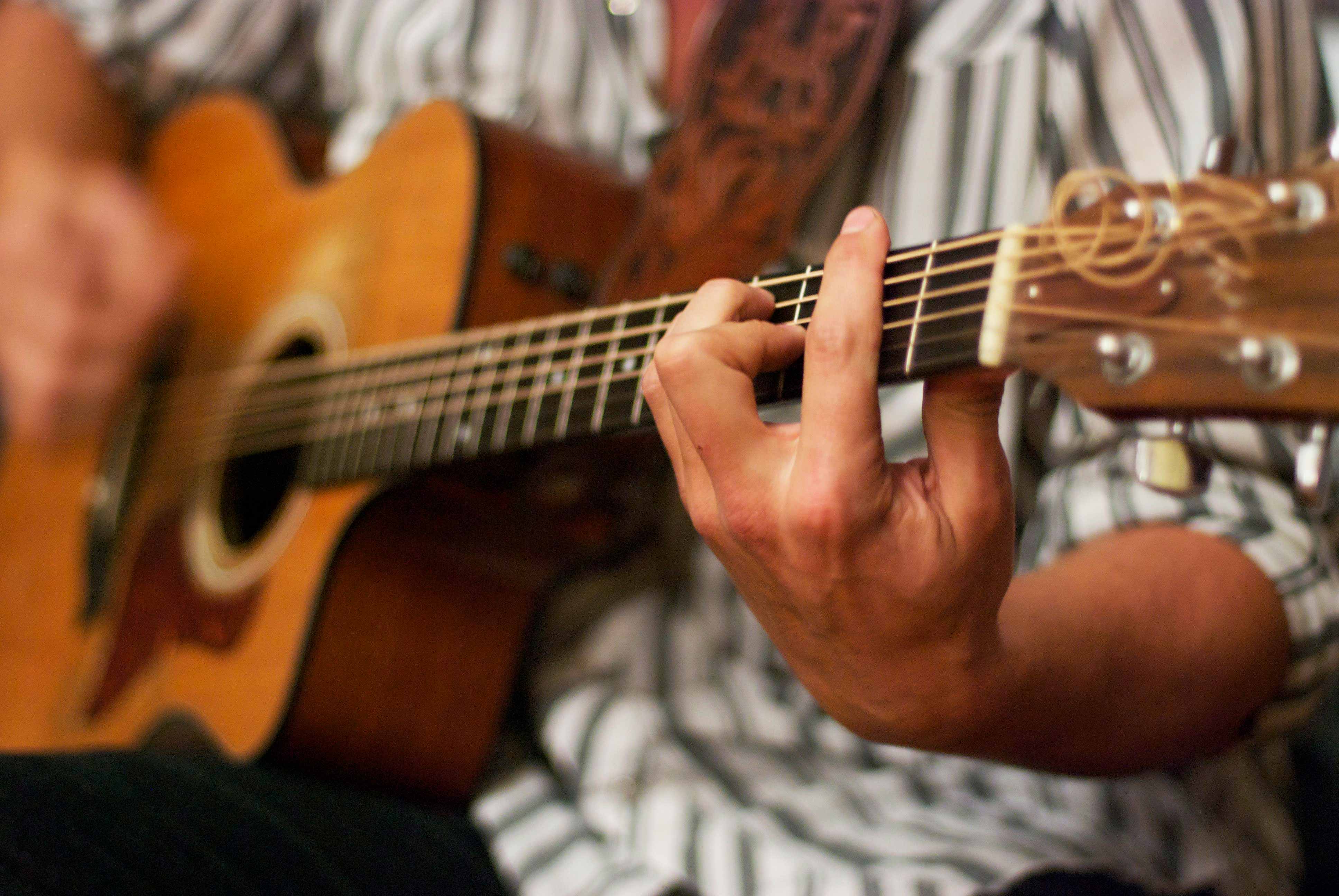 One thing that I deeply miss while backpacking is real homegrown San Francisco music. After spending ten months away from home I was eager to get back to the Bay Area for a good dose of live shows. Not that I hadn’t had my fair share of hot Latin tunes, but I was a little salsa and mariachi’d out. So when my good friend Lauren invited me to a Sofar Sounds San Francisco gig hosted in someone’s living room, I was practically drooling at the idea of some sweet live music.

The concept of Sofar Sounds was created by a couple of English guys who were sick of going to shows and not being able to enjoy the music because of loud and obnoxious crowds. They started the first Sofar Sounds in London and began inviting musicians to come play in friends’ living rooms. The brilliant concept has spread worldwide to 55 cities (and growing) with shows as far as South America, Australia, and China. The shows are all donation based and the bands and organizers work for free. Because Sofar wants to keep the shows to a reasonable size, the location and time is only announced the day of the show to a limited number of people whose RSVPs have been accepted. To receive this information you need to get on the email list, but due to the high demand not everyone is admitted. If you don’t get in the first round, don’t sweat. Ask to volunteer at a show or offer up your living room as a venue! For more info on that check out their website and sign up to their newsletter. 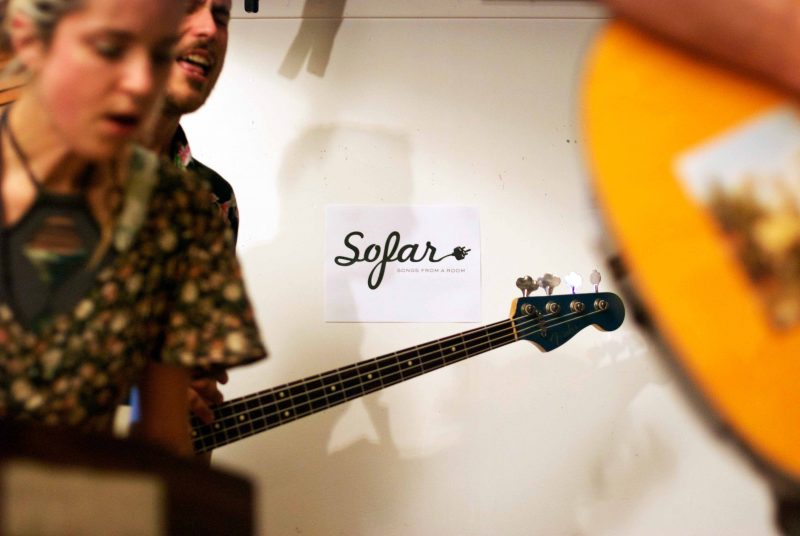 On the night of the show, we only recognized the venue from the telltale handful of hipsters milling about out front. Otherwise the loft, hidden within a converted Sears warehouse in a semi-sketchy part of San Francisco, would have been totally inconspicuous. I wasn’t sure what to expect from my first Sofar Sounds, but from what I had been told, it was the place to be tonight.

The shows are fairly exclusive, but I was lucky enough to get in with Lauren who works with the SF organizer. If I hadn’t been her +1, I’m not sure I would have made it on the list. As we walked in the loft, a coolness permeated the air that resonated in the crowd from the ironic facial hair, down to the vegan leather booties. We spotted some floor space in the very front. The room was filling quickly, so we pulled out our pillows and plopped onto the floor, eager to hear some tunes.

The first band was The Herbert Bail Orchestra, a quirky Edward Sharpe-esque folk band from LA. Comprised of seven youngish men, none of whom are Herbert Bail, they looked like they had blindly chosen their clothes from the thrift store bin and still managed to look effortlessly hip. 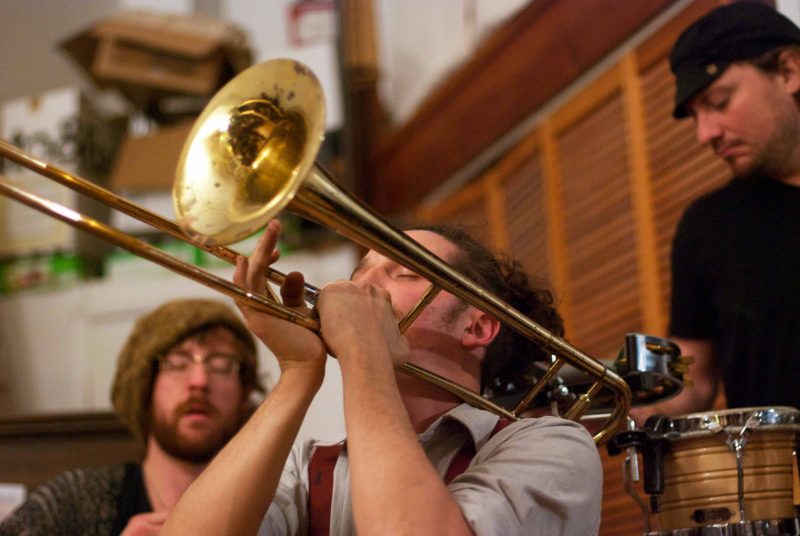 There set was surprisingly awesome. Not that they didn’t look like particularly good musicians, I just wasn’t expecting to be so impressed by a band I was hearing for free in a converted Sears warehouse. But they managed to the rock the shit out of that loft. The word orchestra in their name is more than fitting, with a smorgasbord of instruments onstage including the accordion, trumpet and banjo.

The lead singer was battling a cough, taking gulps of cough syrup between songs, but he managed to belt out the lyrics anyway. After their set the band handed out free download cards for their album, which I can now confirm is also awesome.

Next up was The Tambo Rays, a four-person chill pop band from Oakland. The guitarist sings with his younger sister (seriously, how cute is that?) who rocked out on the keyboard with two friends on the bass & drums. You can tell they’re better suited to a plugged in set, but they still jammed out their psychedelic tunes. During the set the keyboardist passed around her old school Nickelodeon Gack camera for the audience to take some snaps. It was silly and fun and something you just don’t get at regular shows.

The last act of the night was Anthony Hall, a solo musician whose acoustic guitar was perfect for the venue. His long ponytail suggested hippy, but his songs were far from Grateful Dead covers. His original music is catchy and his lyrics are clever. He interjected each song with funny anecdotes and tales of lost love, leaving the female audience members (and probably some male) swooning.

The vibe turned heavy when he played a song about losing someone close to him and the crowd became quiet and pensive. But he quickly lightened the mood by playing a personal childhood favorite, “the Bear Necessities,” that’s right, from the Jungle Book. His set was scheduled to end there, but it was clear the crowd was craving just a little bit more. He wrapped up the night with two songs that just felt so San Francisco: slowed down versions of  R&B classics Usher and Blackstreet. Fully transported back to 1997, he had all of us nostalgically singing along.

When he finished, the crowd was left with a warm music high. Not ready to leave yet, most people stood around chatting until they started making their way out to the street and heading home, buzzing off good music and a real sense of community.

Cancun Itinerary: 2 Days to One Week

Things To Do In Baja California Sur – Activities and Adventures

What to Do in Belize: Adventure Activities