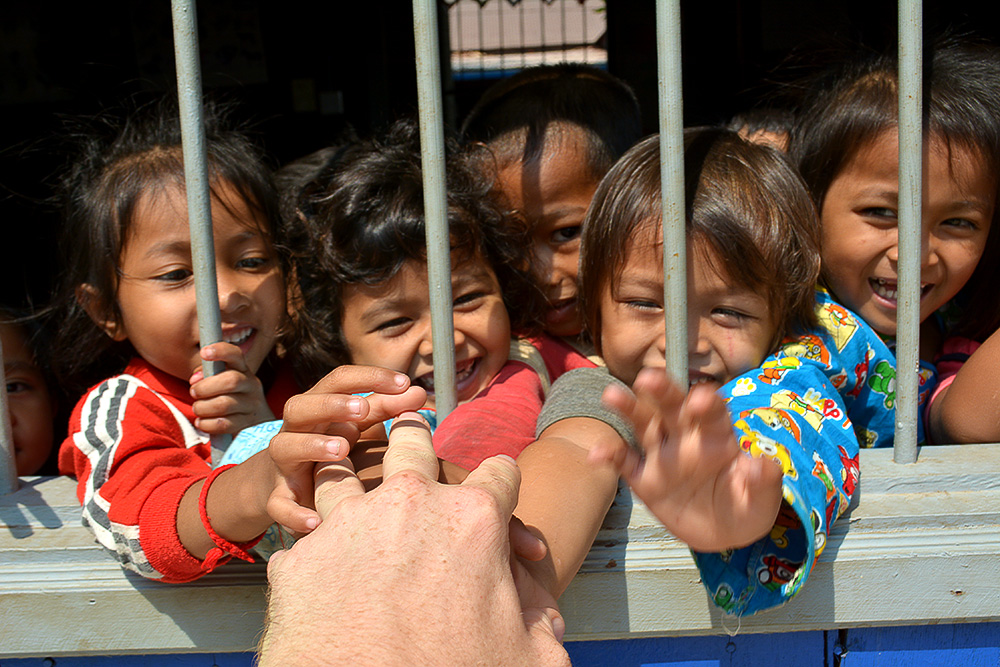 A month and a half into our trip and we’re really starting to feel at home in Southeast Asia. Thailand was beautiful, but we couldn’t shake the feeling of being on the same well-worn path, following every other backpacker. We were hoping in Cambodia we’d be able to ditch the touristy spots and explore by ourselves. After two weeks in this amazing country, we’ve definitely been able to do just that. We can’t wait to continue exploring and creating our own trail, but for now here are our 5 first impressions from Cambodia. 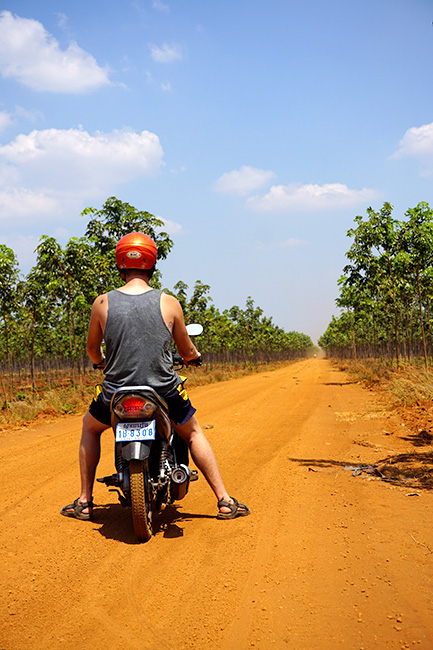 “We felt a sense of adventure, like how travelers might have felt when exploring Thailand 20 years ago or so”

Off The Beaten Track Travel

After spending a month island hopping in the south of Thailand, we were looking forward to getting off the tourist trail for a bit. Our first stop in Cambodia was the town of Siem Reap located next to the ruins of Angkor Wat. With thousands of tourist heading to the famous ruins daily, it’s not surprising this area is packed with travelers.

Even still we were able to get out off the beaten track pretty quickly. Just a few hours east of Siem Reap is the Cambodian countryside. We stayed in the town of Banlung, a small city that is a jumping off point for many outdoor activities in the region. With just a handful of guesthouses, this city is a breath of fresh air away from the tourist trail. When we hopped on a moto to explore the area, we felt a sense of adventure, like how travelers might have felt when exploring Thailand 20 years ago or so. Dusty dirt roads took us out to local villages where no one spoke English and we were the only backpackers for miles. 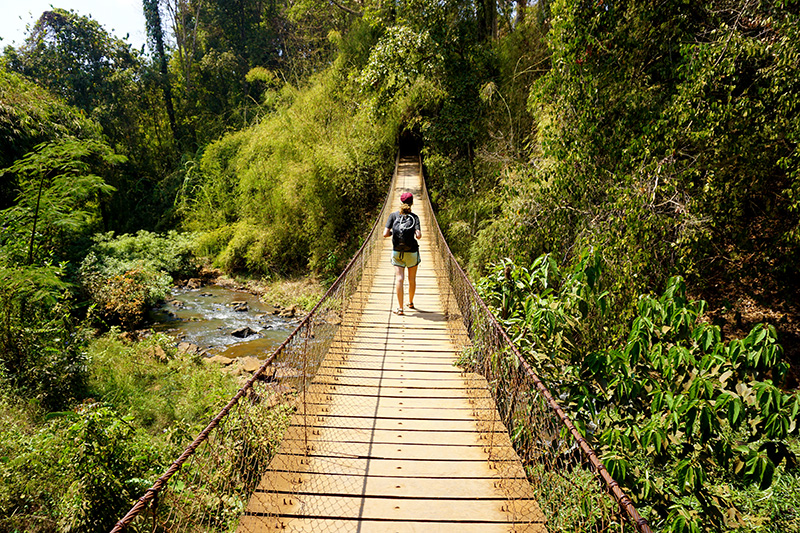 We knew that the horn was a widely used accessory in Southeast Asia, but the Cambodians take it to a whole new level of craziness. Zipping around the highways in minivans I’d say the driver is on a 50/50 horn to silence ratio. Any and every single time the driver goes to overtake someone, go round a corner or pass through a town they just press down and let it rip.

When we asked our Cambodian friend about this he said it was actually a sign the driver was being responsible. He said that if the driver didn’t send out their endlessly ear piercing horn at every opportunity, that the chances of crashing could be higher. That made us a little more confident in our drivers, but eliminated any chance of getting some sleep. 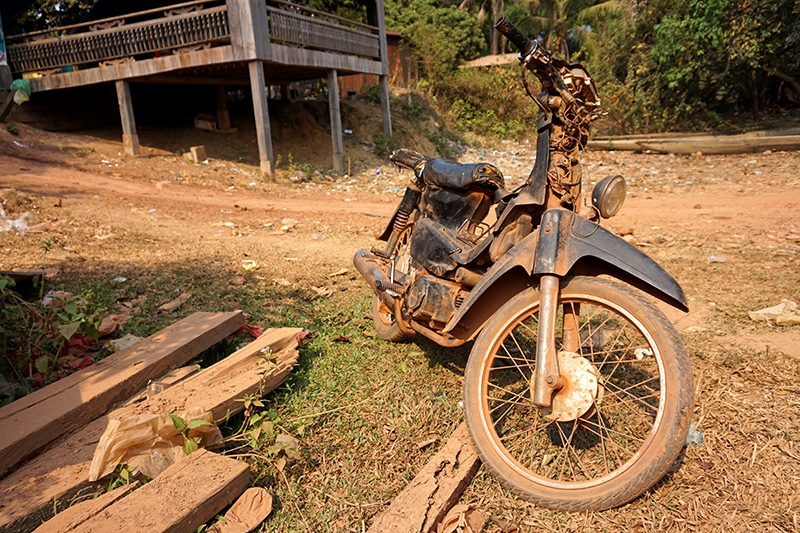 Maybe we were spoiled by copious amounts of delicious street food in Thailand, but for some reason we just don’t think the food in Cambodia is as good as it’s neighbor. Particularly as vegetarians, Thailand seems to have had a lot more choices in terms of curries and noodle dishes, and the quality of tofu was definitely a lot better.

Our Cambodian cuisine so far has consisted of a lot of egg baguettes, which in itself is a nice change to eating noodles and rice for three meals, but when it comes to curries and such we haven’t found too many good ones. We tried the traditional dish of fish Amok (a Cambodian curry), but made the mistake of ordering it when we were inland, away from the coast. The curry itself wasn’t bad, but the fish was so chewy it was like biting into a piece of rubber. 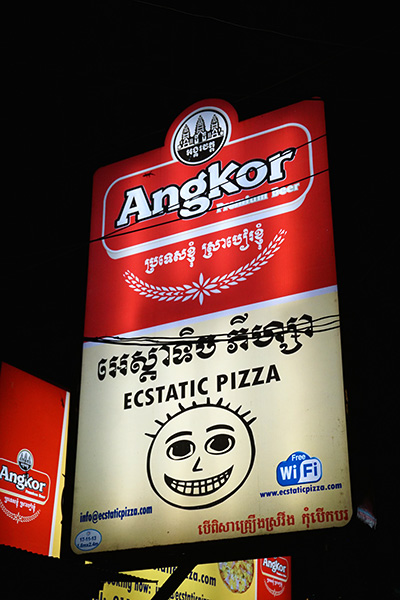 One food that Cambodia, or at least Siem Reap, has an abundance of is… marijuana pizza. Wait, what? Yea, we’re not really sure either, but we’ve been warned that the restaurants selling “happy pizzas” are laced with marijuana. We haven’t tried it, but have noticed a lot of spaced out looking travelers wandering around town.

” A whole pitcher of the local beers Cambodia or Angkor will only cost you $2. Not bad when you consider that same pitcher of beer in Australia would cost $20! “ 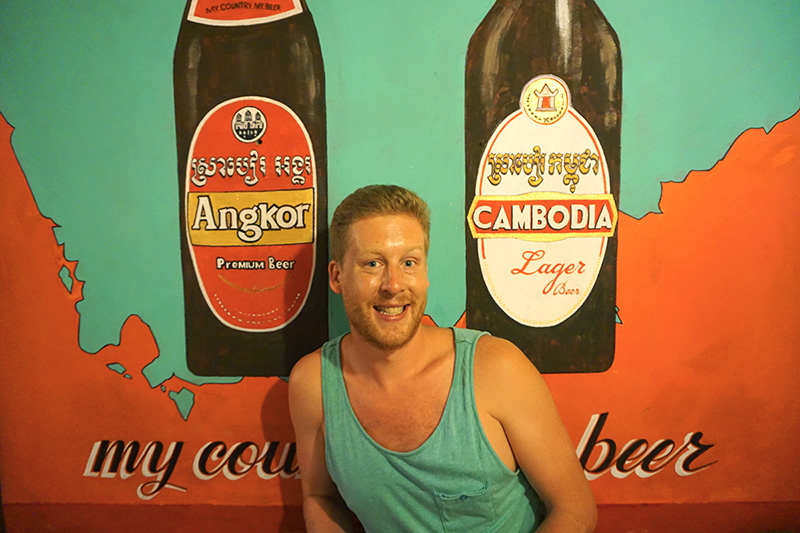 Finally, some cheap beer! Surprisingly Thailand was a bit expensive when it came to nights out drinking. In Cambodia we were happy to find that draft beer was readily available and cheap! A glass of beer at most bars and restaurants will only set you back 50c, and a whole pitcher of the local beers Cambodia or Angkor will only cost you $2. Not bad when you consider that same pitcher of beer in Australia would cost $20!

It’s not the best beer you’ve ever tasted, but it gets the job done and you can’t complain too much in this hot and humid dust bowl. We’ve actually come to enjoy it quite a lot over the last two weeks! 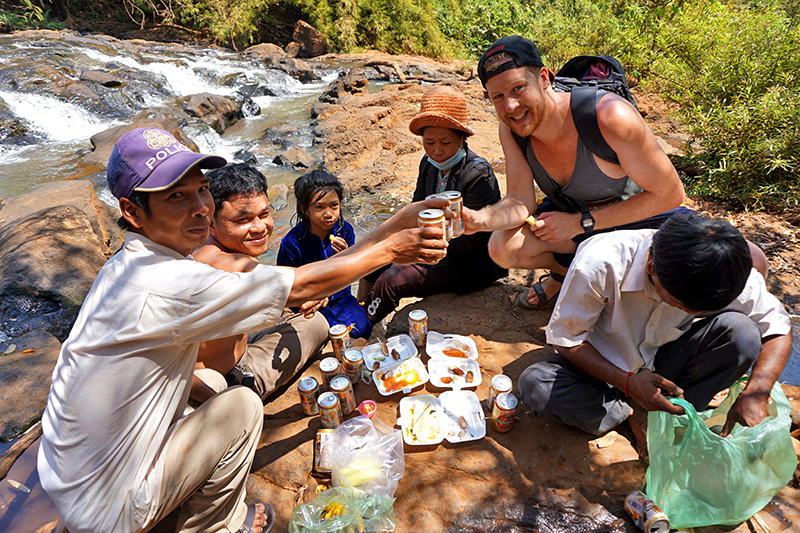 In Thailand we were blown away by how friendly the locals were and that hasn’t changed now that we’ve entered Cambodia. From shopkeepers to random people we’ve meet on the bus, the hospitality is incredible. When we were out exploring a waterfall near Banlung, a group of Cambodians having a picnic invited us over to share their warm beer and mango slices. Another time Jules was walking and a group of tuk-tuk drivers called him over to share a beer (this time ice cold). We’re not sure if this generosity is more due to friendliness or the beers are just so cheap they’re giving them away, but we’ve enjoyed the hospitality.

Not only are the adults in Cambodia very friendly, but the kids are as well. In Thailand we got the feeling that the local children were so used to seeing Western travellers, they didn’t have much interest anymore. Here the children are really curious about us. When we were cruising through the rural villages on our moto, almost every child we saw waved after us, shouting “hello!” We love chatting with local kids, especially because many of them know a bit of English, and are happy to see that Cambodia kids want to interact with us as well. 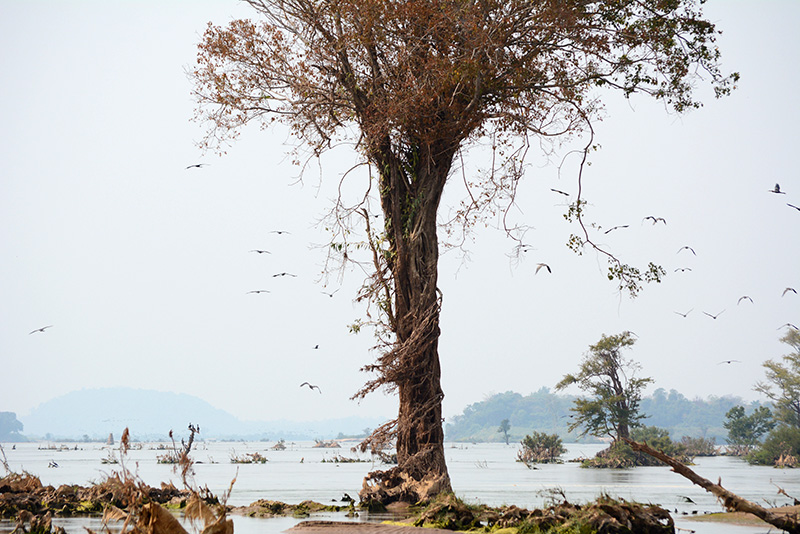 12 thoughts on “Our 5 First Impressions of Cambodia”