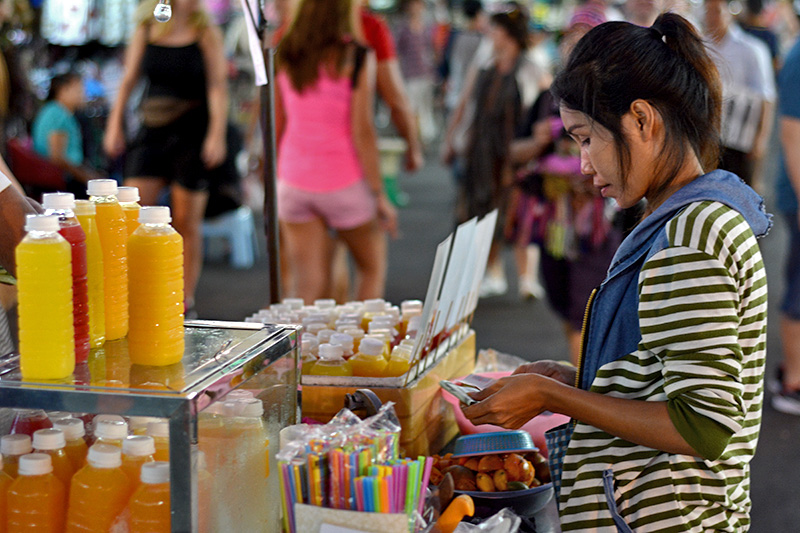 Sitting in a smelly, stuffy and crowded backstreet Bangkok hostel I take a second to look up from my computer and have a glance around. I scan the room for all the unusual, yet somewhat classic, characters that Bangkok drags in. It feels like no matter where you go in the Thailand there’s always the same combination of people that fill up these grungy budget residences. Same story, same background, just a different name and face. I’m starting to see where the phrase ‘same same but different’ comes from. 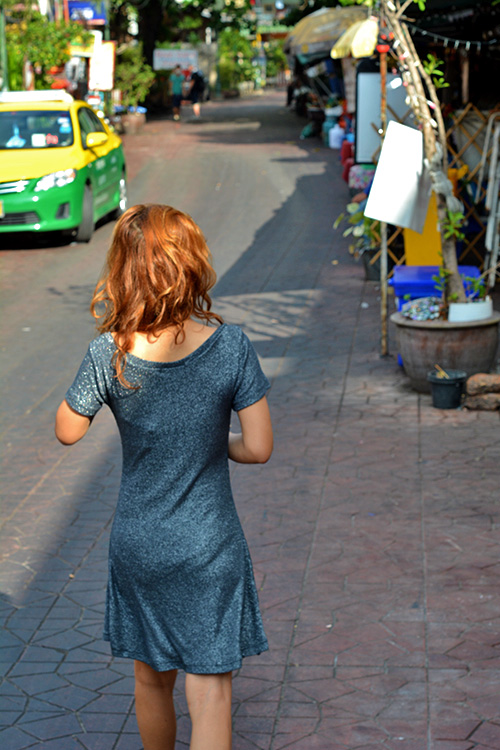 – Not the lady from my observation, but another on the street –

I look to my left. There’s a young attractive Thai lady in the corner, dressed to the nines in 6 inch heels and a tight black dress at 1pm in the afternoon. I wonder what she’s up to, and as I watch her from afar she catches my eye. Even behind the dark tint of my cheap knock off Ray Bans she can tell I’m looking at her; it’s like she can see straight through them. She gives me a wink, I smile politely, and then look away. I don’t want to judge, but I have a feeling I know why she’s here.

I wonder if this is her territory, and then my mind trails off on lots of different thoughts about the intricate politics and etiquette of street prostitution in Bangkok

She goes behind the counter and takes a drink out of the fridge with an air of confidence that tells me she either works here, or has done this a few times. I wonder if this is her territory, and then my mind trails off on lots of different thoughts about the intricate politics and etiquette of street prostitution in Bangkok. I think of the documentary Whores’ Glory about prostitutes in Thailand that we watched before arriving and I’m even more fascinated in knowing her story. 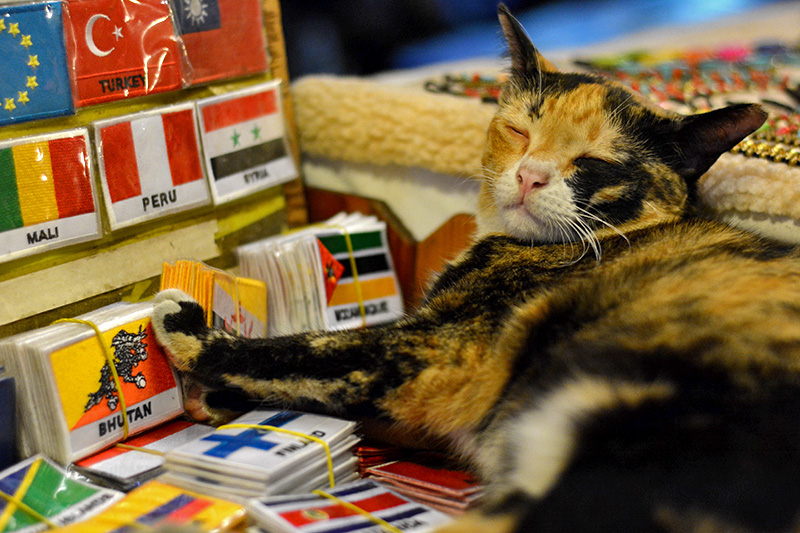 I try not to stare, instead intriguingly observe from afar as a man approaches the woman, who is now casually sipping on a can of Coke and playing a game on her tablet. He’s middle aged, and I’d been watching him before she arrived. He was dotting around on a WordPress dashboard, which is what initially drew my attention. Is he a website creator, an IT guy, or maybe even a blogger? He doesn’t look a like a blogger, but then I started thinking, ‘what does a blogger look like anyway?’ 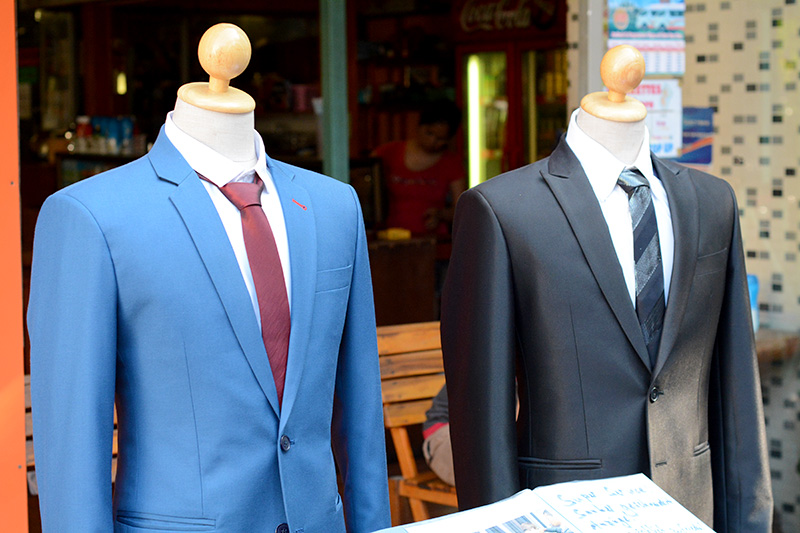 The man casually chats with the Thai lady about a couple of things and shows her some kind of brochure he has in his hand. I try to listen in, but the story jumps all over the place. I get the impression he’s doing a really bad job of picking her up, or he’s working up the nerve to inquire about her potential services. Whatever he’s doing, it doesn’t seem like he’s very good at it. She becomes frustratingly bored of his attempts to get her email address to ‘send her some pictures’ and after a while he gives up and goes back to his computer.

They’re wearing all kinds of obscure garments with big smiles on their faces, which I’m assuming were created by this tailor.

Behind me is one of the ever-available suit tailors of Thailand that constantly line the tourist streets, which for some reason are never operated by Thais. So far the vast majority of them appear to be from Myanmar, India or Nepal. I take a scan of his shop, Smith’s Fashion. It looks pretty standard in terms of street tailors, with its pictures of foreigners proudly displayed in the windows. They’re wearing all kinds of obscure garments with big smiles on their faces, which I’m assuming were created by this tailor. There are also pieces of paper in the shop window with writing from languages all over the world singing the praises of this particular business. You can tell by the presentation that he takes his job very seriously, even if he is a little annoying with his persistence in selling you a suit. 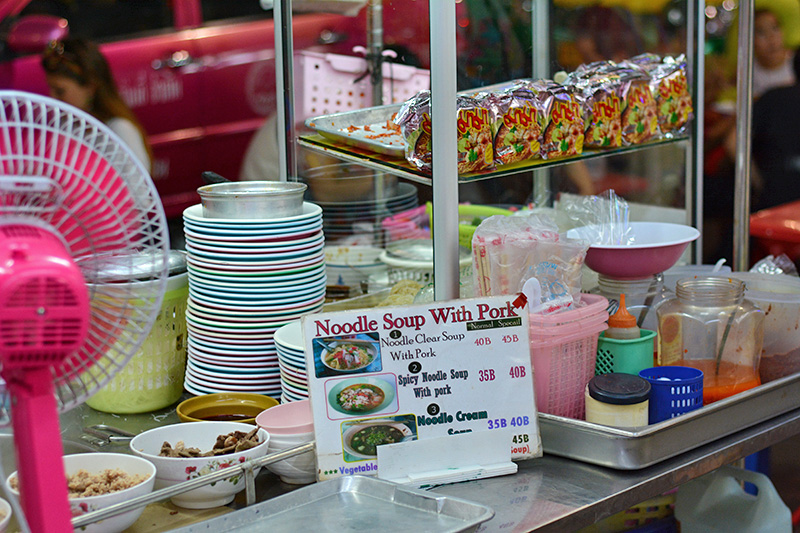 As I round my full circle of the room I spot in the far corner the resident hostel travel operator. She’s a 30-something Thai lady sitting behind a wide glass desk, with a look of extreme boredom on her face. She stares out the front door into the distance and I watch her for a while to see if she’s looking at something in particular or just drifting off. Behind her desk the back wall is full of old Thai tourism advertisements, with faded and tattered locations made famous along the tourist trail. 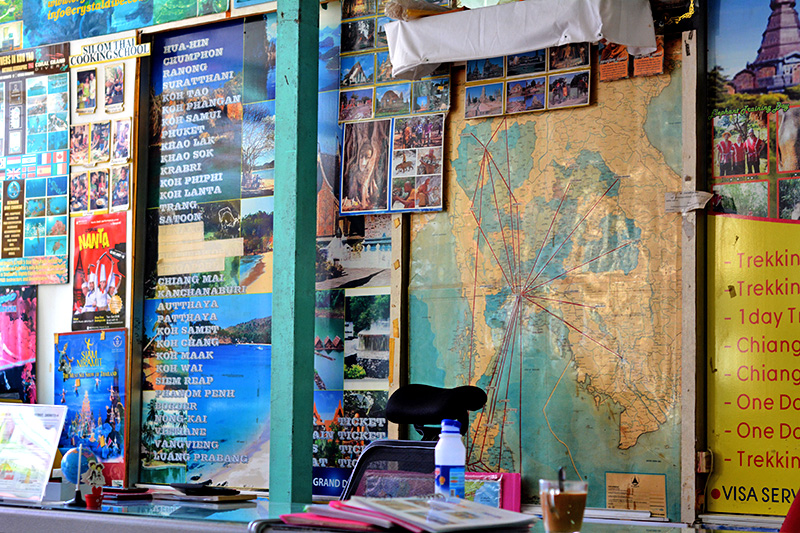 I wonder how much business she could be making, and whether it’s enough to warrant her time. Surely it must be, or she wouldn’t be doing it, but it doesn’t seem like she pulls in many clients. Just then she snaps out of her trance, gets up abruptly and grabs her purse. Where is she going? Maybe, just like me, she’s suddenly realised how hungry she is. And with that I close my computer once more and head out to get some delicious street Pad Thai.

4 thoughts on “Observations from a Backstreet Bangkok Hostel”