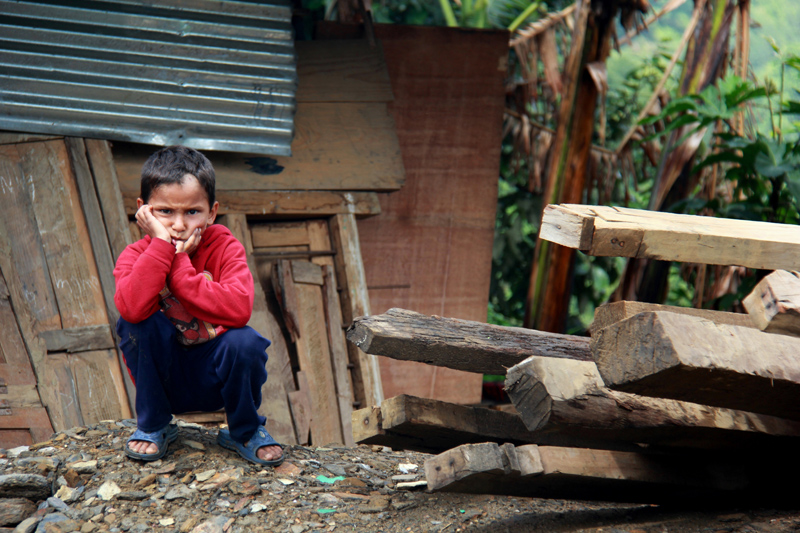 We had just returned from hiking the Annapurna Circuit when the first earthquake hit.

Just over 4 months ago, the earthquake in Nepal shocked the world. An outpouring of humanitarian efforts and donations came worldwide, as images of destruction flooded our computer screens. But as empathetic and devastated as we felt for the people of Nepal, it is no match for actually experiencing the disaster on the ground.

Ben and Christina, our good friends and fellow volunteers during our time in Peru, were in Nepal at the time of the quake. I can’t even imagine how terrifying it must have been, but instead of leaving the country and never looking back, they decided to get to work by helping local villages. They went home to fundraise and are currently back in Nepal working tirelessly and witnessing first hand how their contributions are used. They have agreed to share their stunning photos for this Nepal Earthquake photo series to illustrate the harrowing destruction of the villages and the inspiring resilience of the Nepalese people. Ben and Christina’s full story is at the bottom.

The people of Nepal are still in dire need of donations, please consider helping out Ben and Christina’s effort here: Fund Nepal Villages 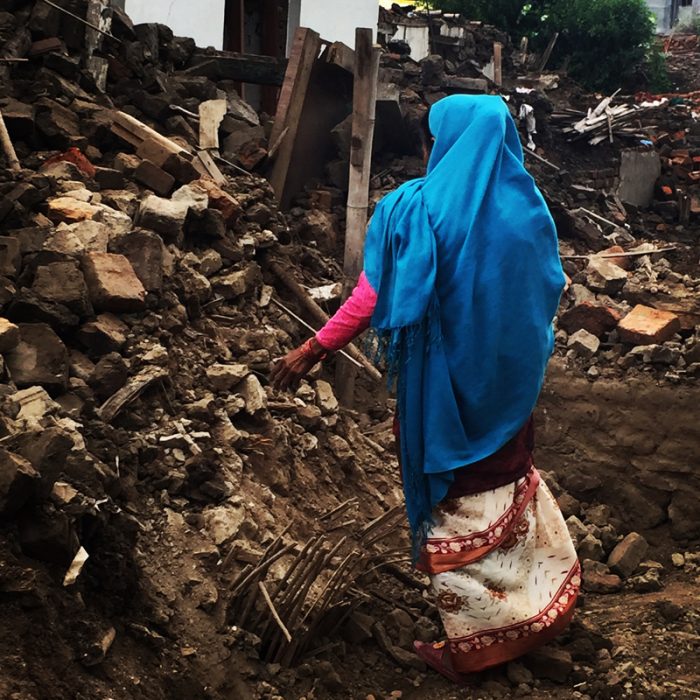 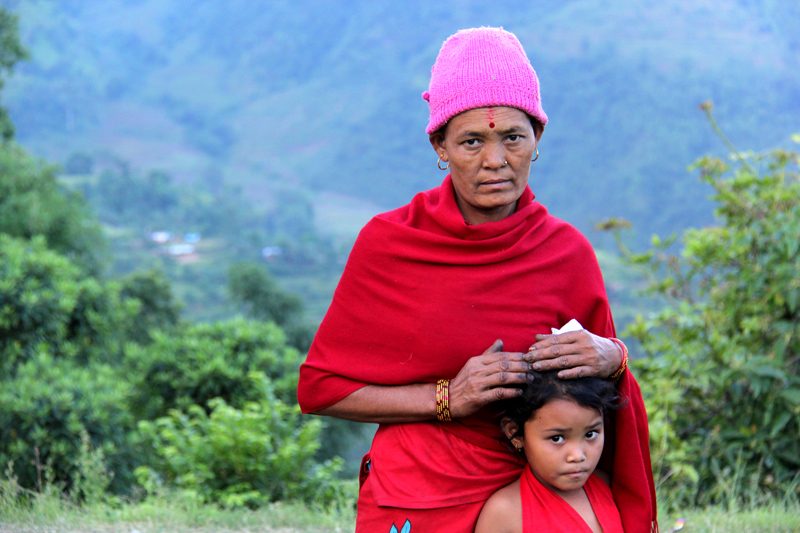 Earthquake survivor in Gorkha district who lost her home, she is awaiting chemotherapy for breast cancer 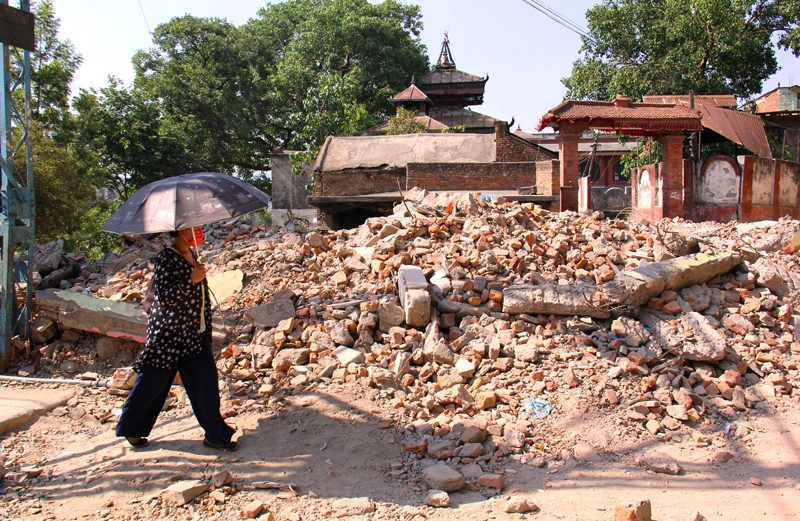 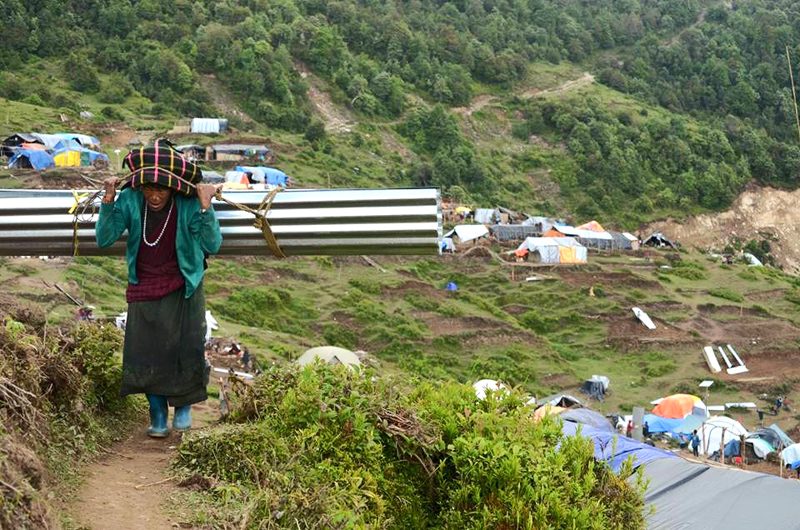 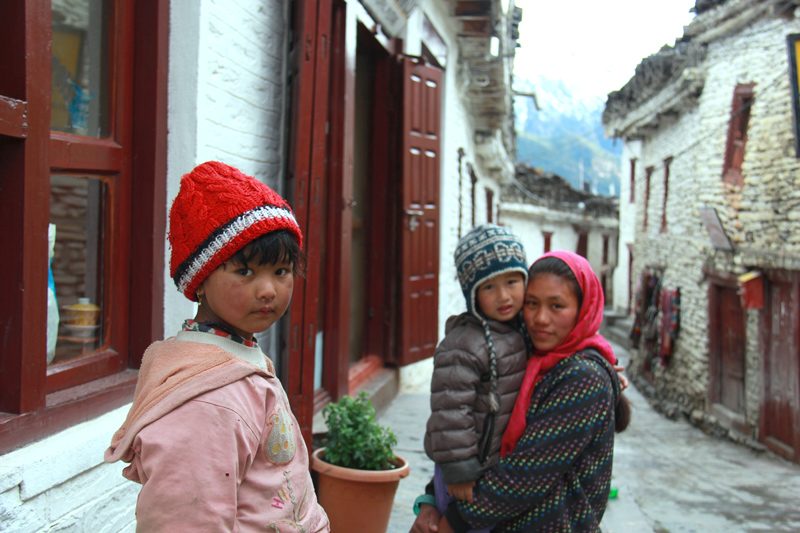 Impoverished family in a remote village 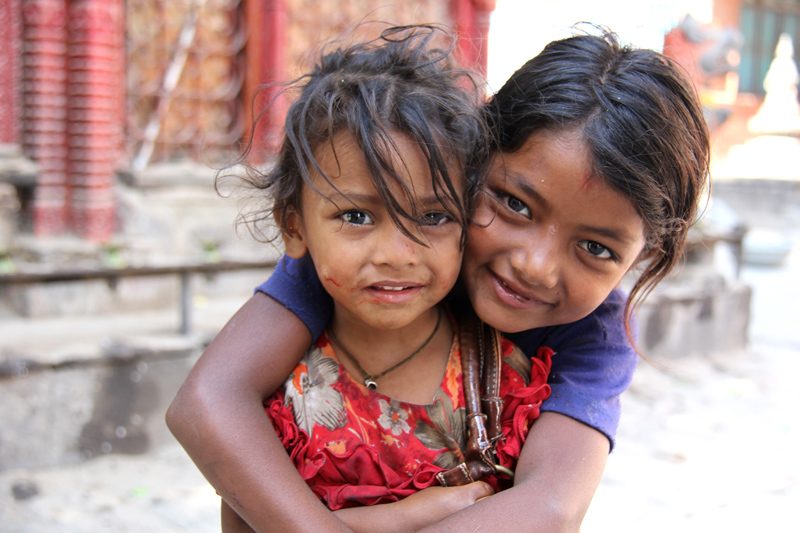 Two homeless girls begging outside a Hindu temple in Kathmandu 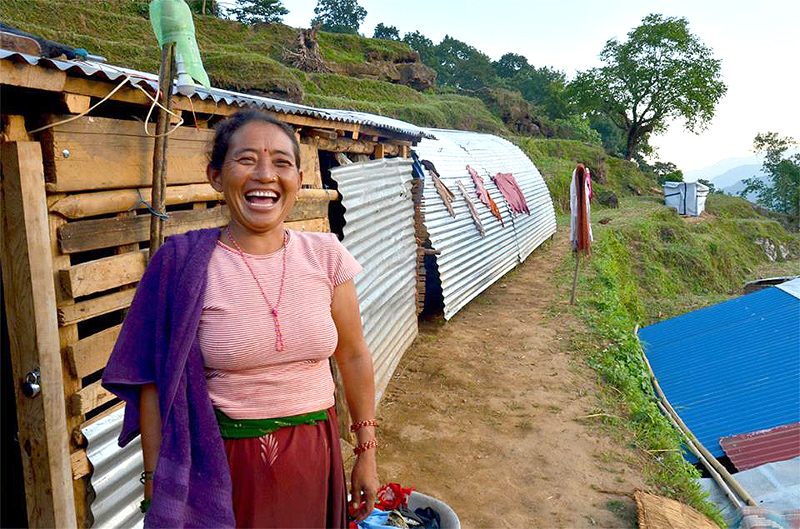 My boyfriend Ben and I were traveling around Nepal this past April. We had just returned from hiking the Annapurna Circuit when the first earthquake hit on April 25. It happened sometime around noon as we were settling into our hotel. Once we felt the shaking and realized what was happening, we quickly made the decision to crouch between the two beds in our room and ride it out. We were lucky to have been in a well-built, modern building located in the city of Pokhara, which managed to come out of the 7.8 magnitude earthquake completely unscathed. It was a couple hours before we heard what had happened in Kathmandu Valley and to hundreds of villages throughout the country.

Over time, the numbers revealed how devastating the earthquake had been to the people of Nepal. In total, there were over 8,700 deaths and over 600,000 homes lost. Those worst affected by the earthquake reside in villages deep in the mountains. Nepal’s extreme, mountainous terrain combined with the remoteness of these villages created major challenges in reaching people in need.

The onset of monsoon season further complicated the situation as many roads started to become impassable due to earthquake damage, flooding or landslides. Some people are now faced with battling the monsoons in makeshift tents and tarps, which simply aren’t enough to protect them from the intense wind and rain.

The reaction of the Nepali people who were in a position to help was truly inspiring. Many trekking agencies and local non-profits immediately stopped their normal operations and shifted to emergency relief for earthquake victims.

After the earthquake Ben and I returned home to the US, but with a return ticket back to Kathmandu a couple weeks later. We had a lot of doubts about whether to return to Nepal. Neither of us possessed the specialized skills needed in an immediate disaster relief situation. We wondered what we had to offer that would genuinely help, not harm or get in the way of people getting the help they desperately needed. We decided to hold off for two additional weeks before returning to let the situation shift from immediate relief to a more semi, long term effort. In that time we decided we would fundraise.

After researching how the relief was going, we decided to raise funds for small, Nepali NGOs who seemed to be reaching villages faster than larger international ones. We also decided to focus our funds on remote villages in the most devastated districts. Since returning to Nepal, with the generosity of our friends and family, we have been able to fund some amazing projects, mainly in the Gorkha region, where the epicenter was located. These projects include medical supplies for a remote village called Fulpindanda in Sindapulchuck, bringing tin to construct 4 temporary classrooms along with one year of school supplies to over 300 students in Saurpani VDC, and funding the construction of 15 temporary shelters in Simjung VDC.

We’ve also spent time volunteering in the Kathmandu Valley with an incredible organization called All Hands. All Hands is an American NGO that currently has over 50 volunteers on the ground, working in various communities in and outside of Kathmandu. Their current projects include temporary classroom construction, transitional home building, IDP (Internally Displaced People) camp improvements, and rubble removal.

We work on one family’s home for about a week, slowly removing the mountain of rubble that was once their home. The families are so overwhelmed by the massive amount of rubble they have to deal with and it feels incredible to be able to help them. As gratifying as it is, it’s also sad, particularly when finding various household items, and things like clothing and children’s toys that was destroyed and buried in the rubble. Sometimes we uncover family photos that are still intact. Their faces always light up when given a photo they thought had been lost. After all the rubble is cleared, you can see the huge weight lifted from their shoulders. And despite having lost so much they are still smiling and laughing. It’s really stunning to see these families deal with their circumstances in such a gentle and dignified way.

Ben and several other volunteers have spent the last few days creating an irrigation system around an IDP camp to create drainage during the daily monsoonal rains. Before they began, the camps would flood and families were left in knee deep water. Improving the drainage and creating appropriate sanitation facilities will help to stop disease from spreading in the camps and improve the overall well-being of every family there. Most IDP families are eager to help out wherever they can.

Throughout our experience in Nepal, we’ve found most people are very empowered to help themselves. It’s very motivating as a volunteer to see such resilience. Even though they have lost so much, they are still driven to help themselves. But they cannot do it alone. With their homes and livelihoods destroyed, they need assistance to rebuild their lives.

Although the situation in Nepal is no longer making headlines, there is still an estimated 2.8 million in need of humanitarian assistance, and 1.1 million of those in need are children. If you are interested in learning more about our progress or in supporting remote villages in Nepal, please visit: www.gofundme.com/fundnepalvillages.

Thank you to Ben and Christina for their beautiful Nepal Earthquake photo series and for their contributions to the disaster relief efforts! Send your messages of encouragement below!