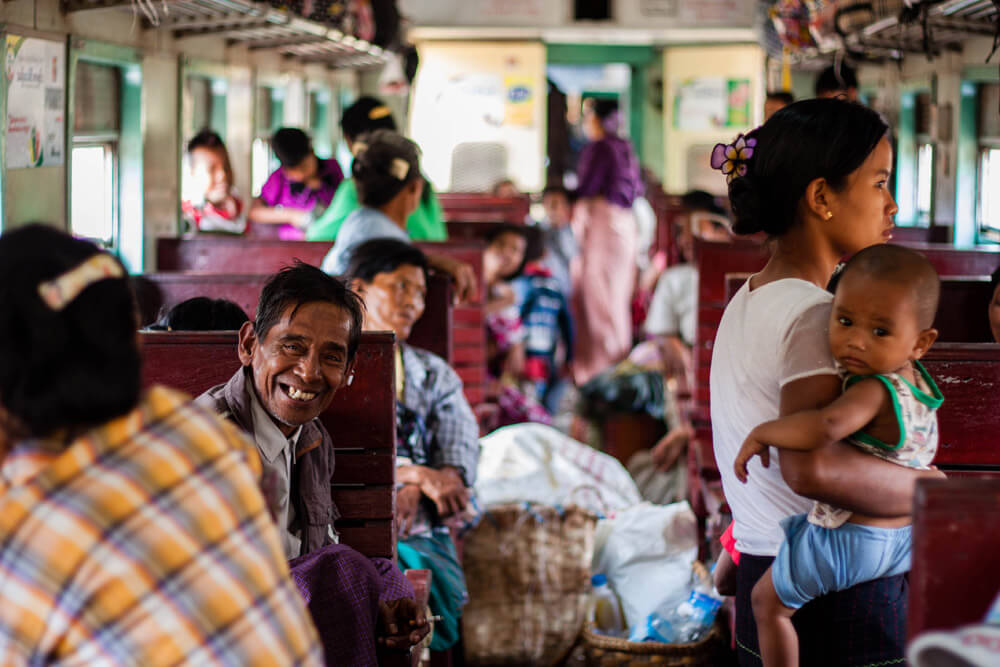 The following photo series is a guest post by the talented travel photographer and writer Annapurna Mellor. Visit her site and social media through the links below and read her full bio at the bottom of the post.

Ever since I first saw a photograph of the plains of Bagan, visiting Myanmar (Burma) conjured up ideas of the unknown. I became obsessed with the idea of visiting this land, so shrouded in mystery, a place so much off the beaten track to the rest of Southeast Asia. I first visited in 2014, when I spent a month solo backpacking the country. From my arrival in Yangon one sunset evening, my senses were on fire. Burma is like another world. Trapped somewhere between the tranquil ideal of the unknown, and the desperate need for growth and democracy. A country locked in time, shut off from the West for almost forty years, has become a sight for even the most well-travelled eyes. When traveling in Burma, it feels like we’ll never really understand the politics, history and cultural complexities of the nation, but that’s what makes it so intriguing. As I wandered through this lost land, in complete awe of the sites, sounds and smiles which fell around me, I couldn’t help feeling captivated by every place I visited, by every smile I encountered, and every dawn I watched.

I returned again in 2015, and spent two months teaching English in a local kindergarten in Mandalay. Once again, I was awed by the landscapes, the golden light which shrouds the morning plains, but most of all, the kindness and strength of the people. I introduce you to a land of red robed monks, rolling mountain sides and some of the most genuine smiles I have experienced on my travels. 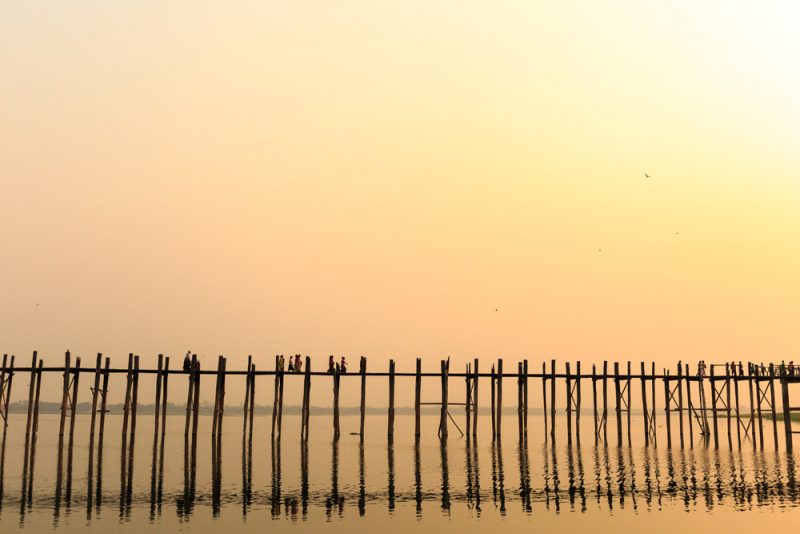 Sunrise at the U-Bein Bridge, Amarapura

At sunset, this place is full of tourists and locals admiring the setting sun over the Taungthaman Lake, but at dawn, it’s quite a different world. Monks wander along the planks to reach their monasteries at either side, locals ride bicycles across to the morning market and the lake shimmers a soft, welcoming gold. In dry season, the water is very low and still, and I enjoyed the glass like effect it had made for beautiful photographs. 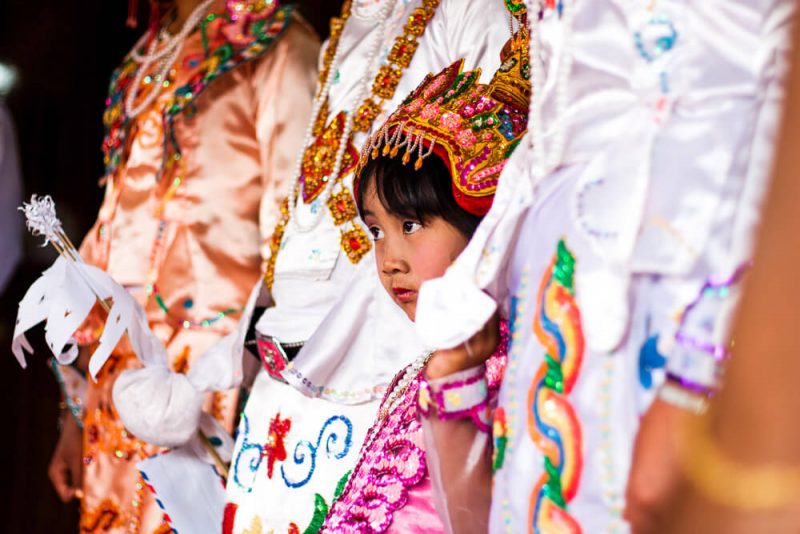 There seems to be festivals year round in Myanmar, which is one of the reasons why the country is a photographers dream. The Novice Festival takes place over the summer, when children become monks and nuns for a period away from their schooling. Before the children enter the monasteries, the family will open their homes to the community and the children parade around in their finest clothes and jewellery. I caught this girl peaking from the robes of her siblings. She looked so frightened, and as the next day she would leave her family for the nunnery, maybe she had every right to be. 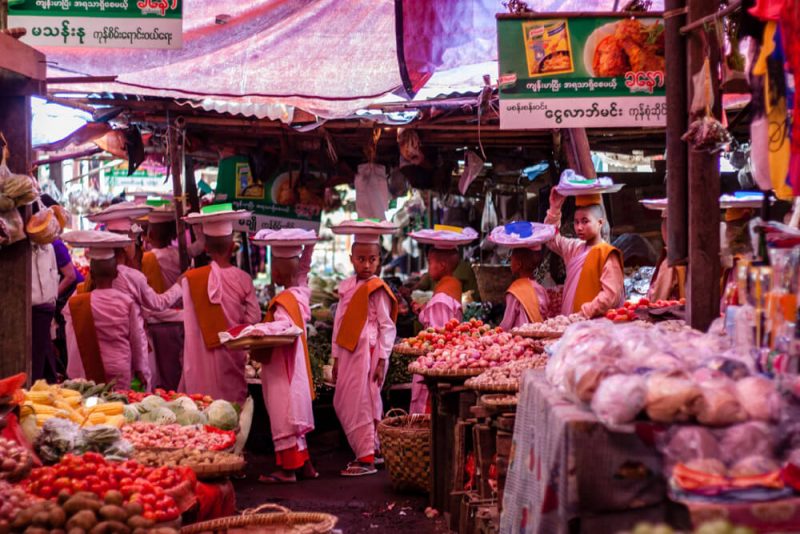 Nuns in the Pyin Oo Lwin

After the Novice Festival, you see many parades of young nuns in local markets, where they collect alms. Seeing a train of pink robes is always quite a sight, especially in Burma’s exotic, chaotic market places. The Pyin Oo Lwin market is one of my favourites in the whole country, there seemed to be photographs around every corner. 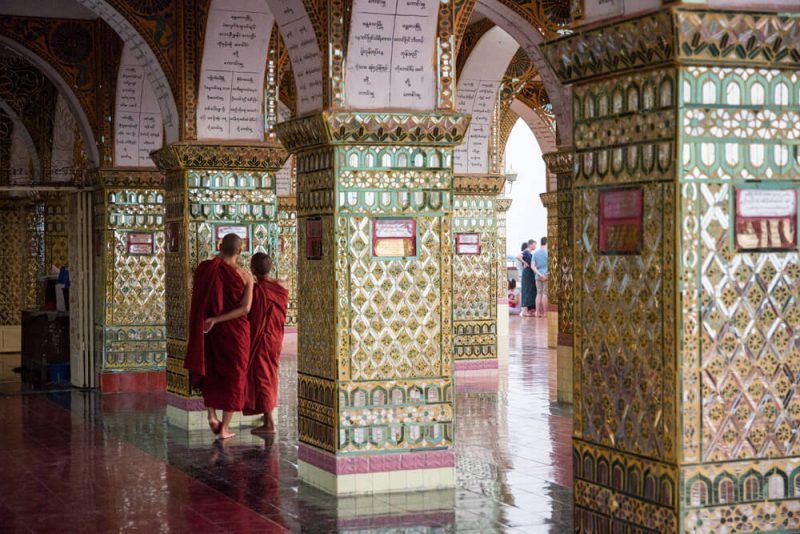 I spent two months living in Mandalay city, a city I can’t say I love as much as the rest of the country. Walking up to Mandalay Hill at sunset became my refuge away from the busy, traffic clogged streets below. At the top, many monks would start conversations with you to practice their English skills. Hearing their stories and listening to their laughter would remind me why I loved this land so much. 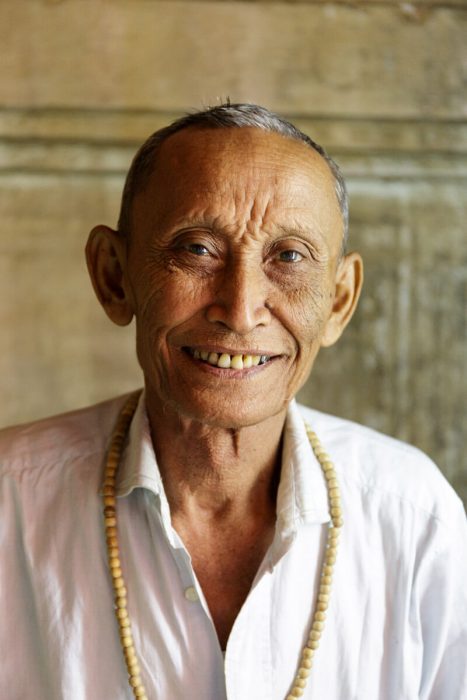 Each one of Bagan’s 2,200 pagodas holds different treasures, and different stories. Some are quiet and empty, and giant Buddha’s sit alone inviting anyone to come and meditate and find peace under their arching roofs. Others are full of barefoot pilgrims and market stalls, where children run wild through the corridors and there is a constant chanting of prayer. I found this man in one such temple, as he sold chains of Mallah beads for $1 each. His soft face caught my eye and he gladly let me take his portrait in exchange for a sale of a string of black beads. 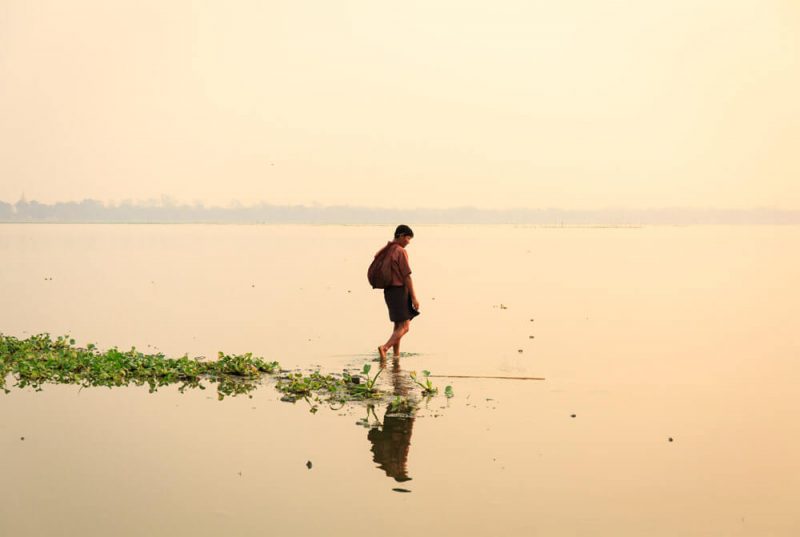 At dawn under the U-Bein Bridge, fishermen lay out their shallow nets to catch whatever they can in the low waters of dry season. I watched this man for a while, as he appeared to walk on water across the lake, his grace and the stillness of the moment reflected Burma’s undeniable peace. 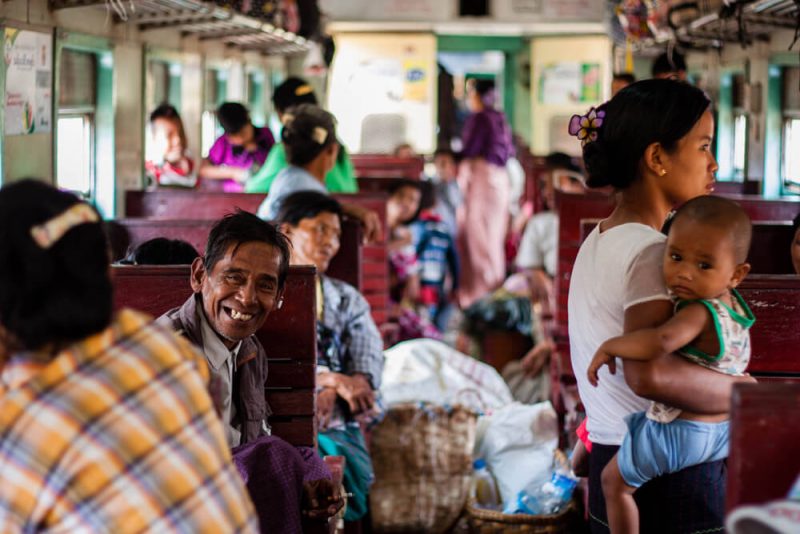 I love train travel anywhere in the world, from Russia to India, to Thailand to the USA, for me riding the rails is always the favourable way to travel. Trains in Myanmar are a great array of life. This was taken on the slow train which chugs from Mandalay to the mountain village of Hsipaw. The first time I caught this train, derailment meant it took over 12 hours to arrive at our destination. Thankfully, it’s full of friendly faces, ladies selling bags of chilli mango and views which can keep you occupied for days. I love the smile on this man, so genuine and full of life. 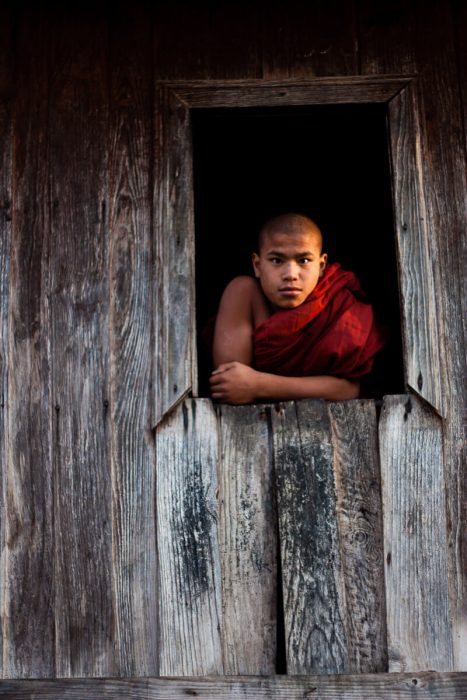 When you trek through the Shan Hills from Kalaw to Inle Lake, you come across many monasteries standing on stilts and made from dark teak wood. I caught this monk peering from one of the windows, he stared straight into my camera so peacefully. I was glad I could capture a few moments of his gaze. 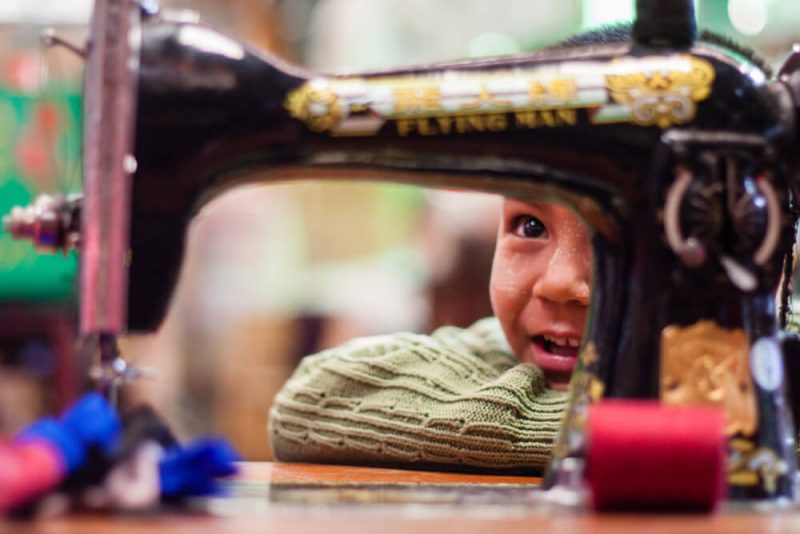 Boy at the market

I’ll never failed to be blown away by the kindness of the Burmese, and this is a portrait of a young boy whose mother was a seamstress in the markets of Pyin Oo Lwin. While his mother fixed my friends trousers, I chased him around the market, snapping his cheeky smile whenever I could. 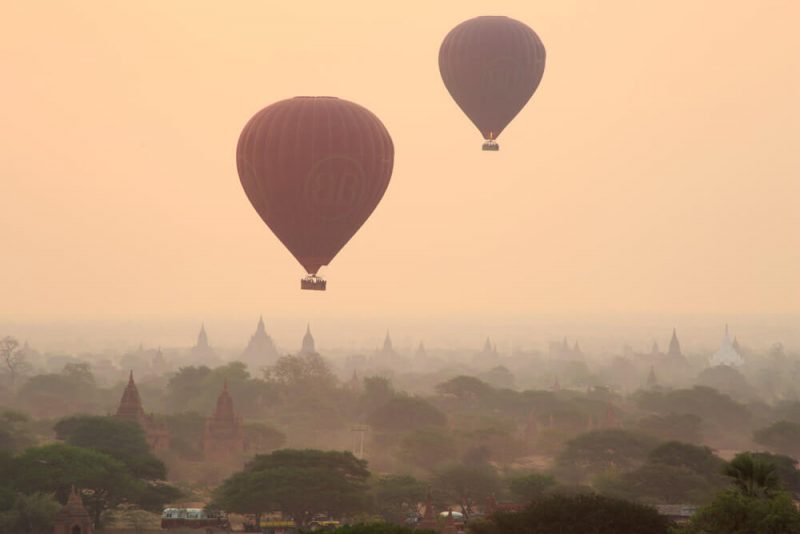 If there’s one thing I recommend to everything visiting Myanmar, it’s to force yourself out of bed before dawn, cycle to one of the high pagodas, and watch the balloons rise across the golden plains of Bagan. It’s mornings like this which make the country so special, and make me constantly eager to return.