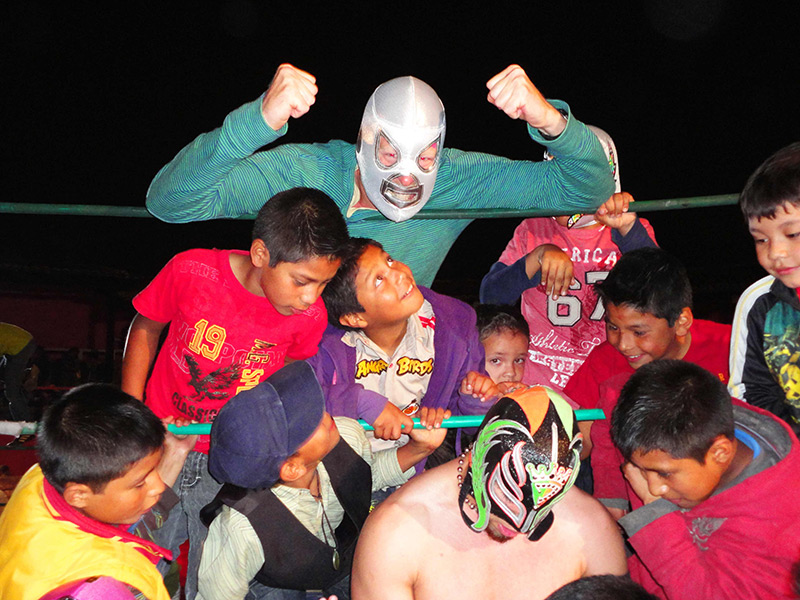 Lucha libre in Mexico isn’t just a sport, it’s a full on family outing of action and excitement. Wrestling is one of Mexico’s favourite past time activities, and everywhere you go you’ll find references to it’s popularity. The levels of production range from elaborately lit up stadiums in Mexico City, to dingy community halls in tiny towns. Either way, when an event is announced, people flock to the arena to see their favourite wrestlers battle it out. Today’s special event was in honor of el dia del niño, the day of the child, so  it was very fitting to get into the action.

In the lead up to the entrance you see fathers wearing faded vintage wrestler t-shirts, walking hand in hand with their sons to the stadium, just like their fathers would have done in years past. Kids wear tattered hand me down masks that show signs of passionate wrestling matches. And for people new to lucha libre in Mexico, you don’t need to go far to start your very own collection of memorabilia.

Before walking through the gates I find vendors hawking rip off masks, poorly printed t-shirts and small plastic figurines. An array of brightly coloured masks laid out on the ground twinkle beneath the afternoon sun. Sparkling sequences of pink and turquoise catch my eye from a mask in the corner; this is supposed to be a display of masculinity right? After much deliberation I fork out the cash for a mask in order to fit the part. I go the old favourite and opt for an el Santo mask, a timeless classic of silver and white, that is beloved throughout Mexico. 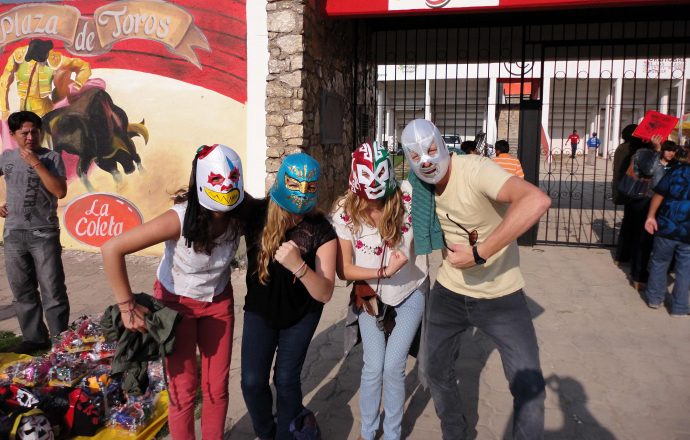 Inside the show people provide to-your-seat delivery service on everything from chilly nuts to 1.2L cups of beer. The smell of pop-corn wafts past and before I know it I’m chowing down on a fresh batch. They really aim to cater for the experience. The only time you need to leave your seat is to use the bathroom between matches, and judging by some of the half full cups you see at the end of the night, some people don’t even do that.

In typical Latin America fashion the show is running half an hour later than advertised. After getting impatient I wander off to investigate. I hop over the VIP section without problems and make a bee line for the wrestlers prep-tent. No one stops me along the way and before i know it I’m backstage and watching middle aged men in their underwear apply baby oil and stretch into tights. It’s a relaxed feeling in the tent and I don’t want to disrupt their preparation, so I say g’day and take a couple of pictures with them before heading out.

After another half hour the crowds impatience grows even further and some kids decide to enter the ring for a bit of pre-match entertainment. Slowly more kids join in and within 10mins it a royal rumble arena with tiny arms and legs flying every which way. Never one to shy away from a bit of childly fun, I slip on my famous el Santo wrestling mask, secure the back and once again pop over the VIP fence. It’s time for some action! 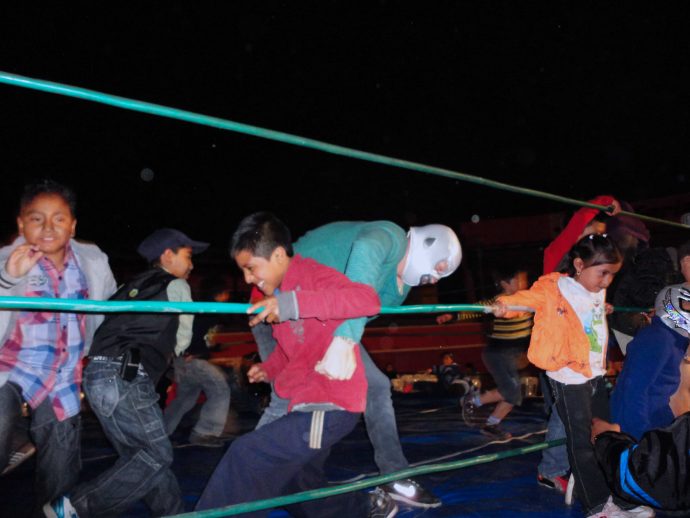 I jump into the dirty ring and enter with a sudden burst of flare, but unfortunately with none of the associated fanfare. The kids look up from their wrestling matches to anticipate my next move. Before i get the chance to react a sneaky niño slide tackles me from behind, buckles my legs and sends me to my knees. Ohh it’s on now!

I grab the closest kid, who’s totally caught off guard, and lift him onto my shoulder. I spin him round a few times before dumping him carefully onto the ground. Out of the corner of my ear i spy a kid ascending the corner buckles and making his way onto the top rope. Next thing i know he launches himself off the ropes and onto my back. Wish ease I flip him round a few times before dropping him on his friends.

More kids get involved as their confidence grows. A tiny kid, no older than 4 and wearing a loose fitting mask, comes up and begins to chop me in the stomach. I fall to the ground and do my best wrestlers acting to show my pain. I flip around on the ground holding my stomach to his delight. All around me kids are lining up to take me on next.

After 15mins of non-stop wretling I’m spent. I can feel sweat building up in the mask, but the polyester restricts any form of air flow. I want to rip off the mask and let my face breath, but that would ruin my masked identity. As it is, I barely manage to keep my identity safe as the scrawny fingers clutch to my face and try to unmask me. Suddenly some music starts in the background and it appears the show is going to start. Kids leave the ring to get ready for the show as I soak in the local applause for my valiant efforts.

I return to my seat with high fives all round and settle in for the show. Over the next 2 hours we bare witness to some of the most ridiculously foolish wrestling/acting I’ve ever seen. It made Peruvian soaps look like the latest Dicaprio performance in comparison. First there was the extremely flamboyant wrestler who’s secret weapon was kissing his opponents into submission. For a strict Catholic society, they were loving the gay wrestling. Besale besale, shouts the crowd, showing their desire for another kiss.

Then there was a guy dressed like the gimp from Pulp Fiction, although try to imagine a pirate twist as he was sporting an eye patch. We enjoyed making up nicknames for all the wrestlers based on their costumes. Other honourable mentions are; The Predator, for his sex-predatorish trench coat; and The Bee, for his uninventive costume of a yellow Quiksilver t-shirt with black marker for stripes.

As the show came to a close we were left thinking that the worse it got, the better it got. It was hilarious. Half backyard wrestling and half improv comedy. More importantly than the cheers and claps were the ear to ear smiles on every one of the kids faces as they cheered on their favorites and booed the bad guys. And on a day like el dia del niño it only seemed fitting.

If you want to see lucha libre events in Mexico City, be sure to check out regular shows on Friday nights for a couple of dollars! 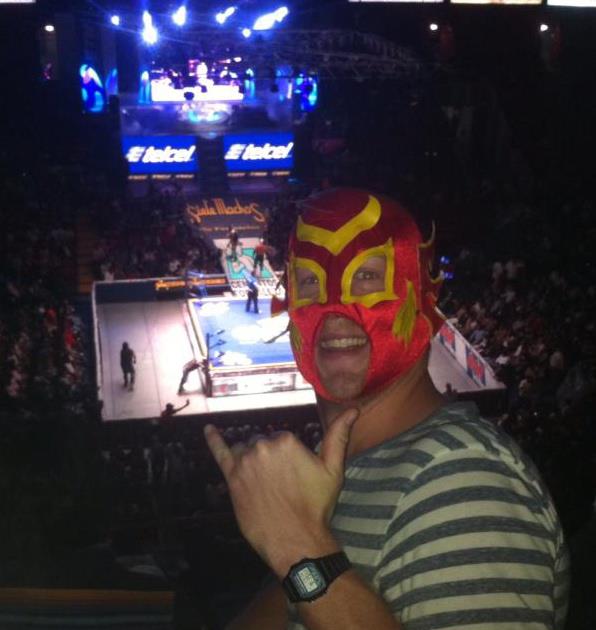