Thanks to JetBlue for inviting us on this trip and having us document this incredible program! As always, all opinions are our own and we would never recommend or promote something that we didn’t fully support and believe in. This article may also contain affiliate links. If you book through our links you help keep this site running to absolutely no extra cost to you!

What happens when you tell nearly 100 volunteers to pack their bags for a trip to a mystery destination to do some good? So. Much. Fun!  And that’s exactly what happened in our recent partnership with JetBlue on their Check In For Good campaign!

Last year, the company sent volunteers to three locations (Houston, Jamaica and Bahamas) to work on some incredible giving back projects. This year JetBlue knocked it out of the park again, by sending nearly 100 volunteers to “Destination Good” for a four-day trip. 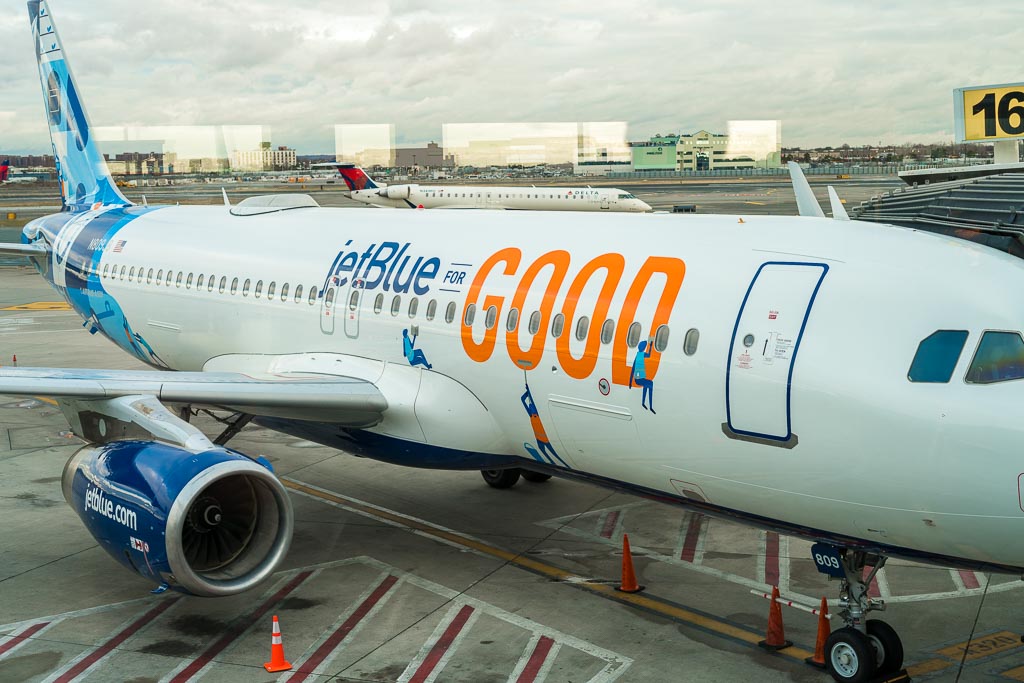 To win a spot at Destination Good, the trip was opened up as a contest to the public. To enter, each person had to answer questions about what it means to them to be a volunteer. Nearly 50 winners were selected (out of 45,000!) and each winner was allowed to bring along one guest.

The catch? They had no idea where they were going! All they knew was that they’d be joining the other winners in New York to fly to “Destination Good,” a secret location where they would engage in volunteer activities. The only hints they got for the location were:

Of course, we were working with JetBlue, so we knew where Destination Good was, but it was really hard not to tell our family and friends where we were going! We were sworn to secrecy and didn’t want to risk spoiling the surprise for the winners! 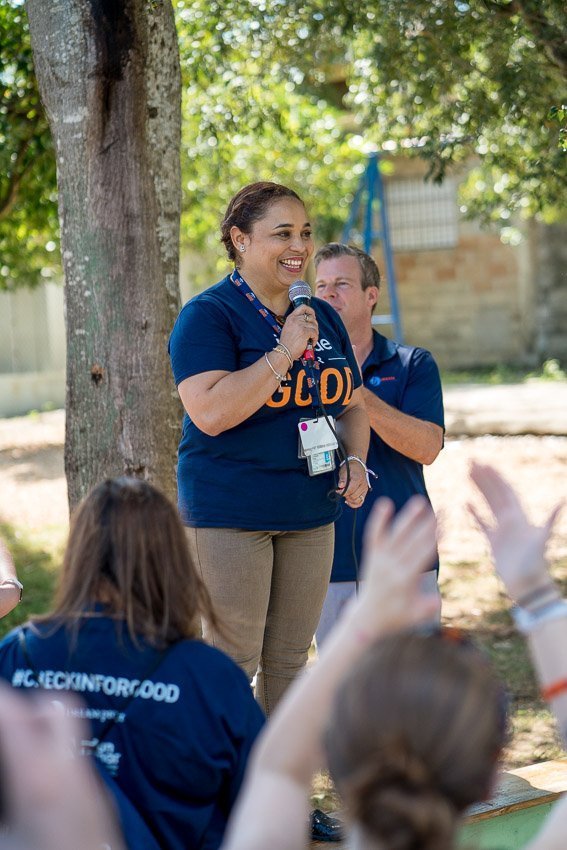 When the volunteers arrived at the airport, they each received a blue envelope revealing where they were headed. And the secret’s out now – it was the Dominican Republic! Cheers were heard echoing throughout the airport, as each guest found out they were about to board a plane to this gorgeous tropical destination!

The second surprise happened at the gate when JetBlue revealed their beautiful new JetBlue For Good plane! We would all be traveling to the Dominican Republic on its maiden voyage, full of the volunteers, JetBlue staff and crew. Everyone was super excited that we were heading to the Dominican Republic and the plane was buzzing with excitement from the moment we took off, to the moment we touched down in Punta Cana!

Watch the summary video below

JetBlue For Good focuses on three core pillars to give back: community, youth & education, and the environment. During our time in the Dominican Republic we would be working on giving back projects that helped address the need in these three areas.

The large group of enthusiastic volunteers was split into two, Team Blue and Team Orange. Over the next three days we worked on two amazing school projects, as well as a vital program to help protect marine life. 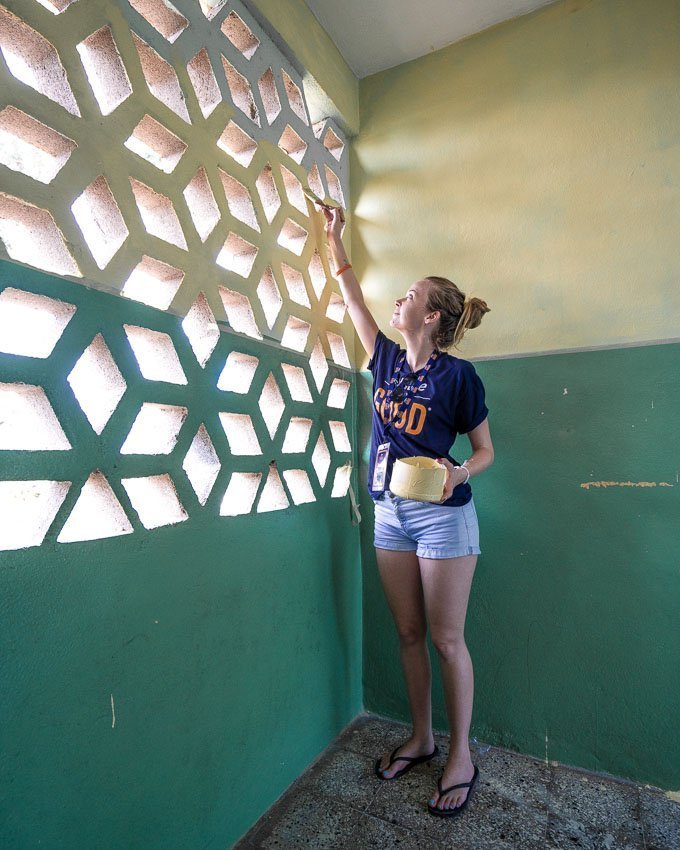 Day 1: Partnering with The Dream Project

On the first day we visited a school that works in partnership with The Dream Project, a local organization helping over 7,500 youth throughout the country receive a better education. We went to the Padre Cavalotto Special Education School, a special education school catering to children with disabilities and special needs, and began our day getting to know the school’s 175 students. We all formed a large circle and played games. Pretty soon, the volunteers were getting hugs from students and everyone was running around laughing.

The positive effect of playing with children can be greatly underestimated. It may seem like all we’re doing is playing silly games, but the organizers of The Dream Project actually identified play time as a need that JetBlue could fulfill. They let us know that these kids don’t generally get many visitors or much attention aside from their teachers, so having this genuine human interaction is very meaningful. 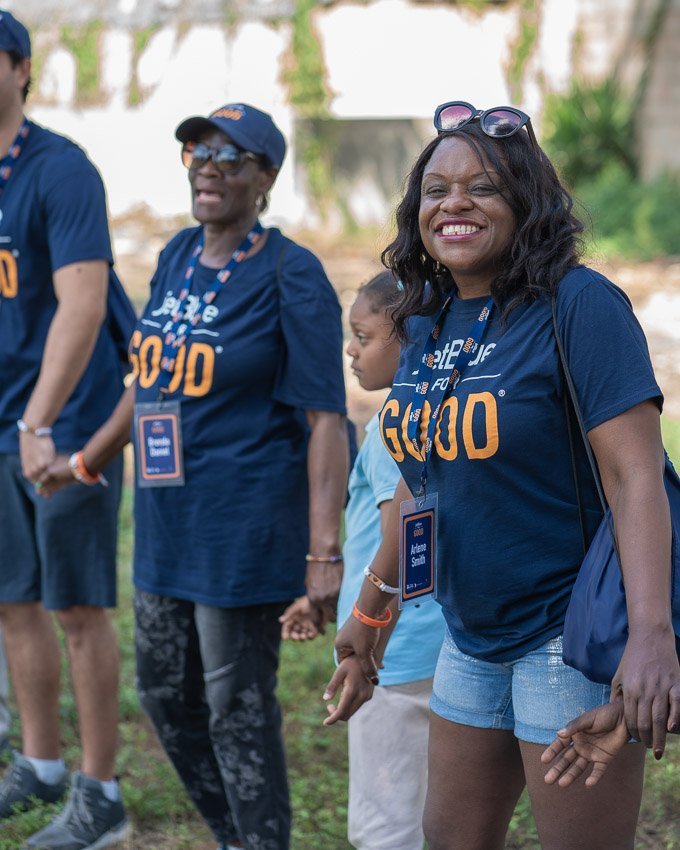 And the positive impact doesn’t end when the volunteers go home. A lot of work actually came before the volunteers even arrived. JetBlue financed the repair of the school’s broken roof. The roof leaked whenever it rained (and if you’ve ever been to the DR, you know it can rain). This led to disrupted classes when the students had to be moved out of the rooms. Having a brand new roof will help the teachers and students focus on what matters most – their education. To further support them with their educational goals, JetBlue also donated 500 books to the school.

With a new roof finished, the volunteers were able to come in and give a fresh coat of paint to six classrooms and one library. When we first arrived, the paint was chipping and construction from the roof had caused corrosion and stains. The fresh paint not only covered these imperfections, but the shade of color was chosen because it has a calming effect on the students. From the first project, the attention paid to these little details showed us just how committed JetBlue is to doing good. 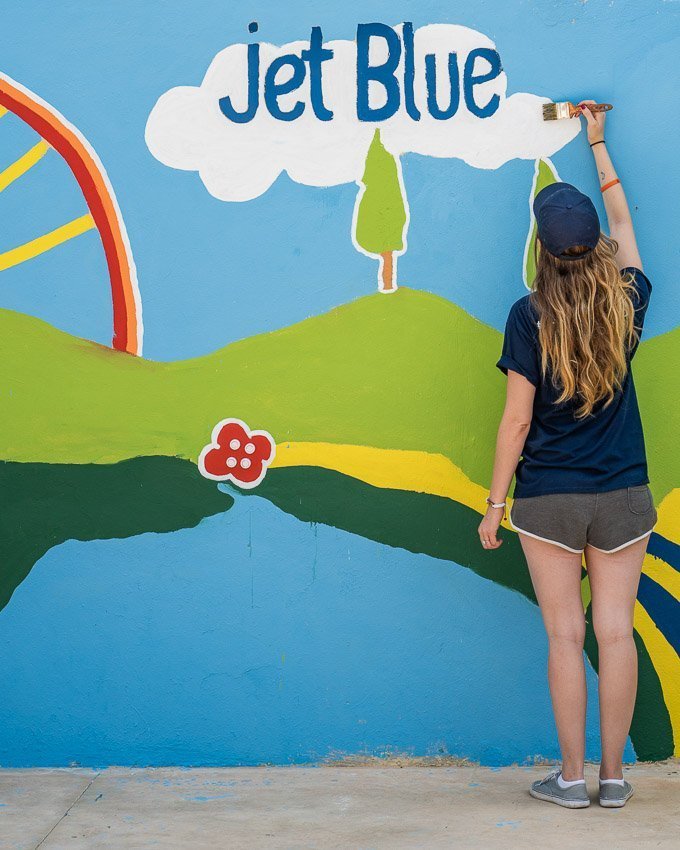 Day 2: Painting at a Local School

Our second day of volunteering was focused on community, as well as youth & education. We went to another school that already had a relationship with our hotel, Paradisus Palma Real. A few weeks before we arrived, JetBlue had worked with the hotel and local contractors to build the school an entirely new basketball court. Before, the court was in disrepair, with cracked concrete making it difficult for the kids to play basketball. It was also closed to the youth of the wider community because no one was able to supervise the court.

Now, with the funding and support from JetBlue and the Paradisus Palma Real, the court has been completely redone. They’ve also been able to coordinate with the neighborhood to have designated community members be responsible for opening the court up to kids after school hours. In addition to the students of the school, more than 900 kids will be able to use this basketball court. This provides young adults from the five surrounding neighborhoods a safe place to play and get exercise.

Our role as volunteers was to revamp and beautify the space for the students. The other group of volunteers spent their first day at this school starting a beautiful mural on the outside wall surrounding the court. On our day, we finished the mural and added recycled plastic water bottles that were cut up and painted to make the wall into a 3D art piece!

At the end of the day we brought the kids out to show them the finished wall and gift them with basketballs and other play equipment. The rest of the afternoon, the court was full of kids running around, shooting baskets and asking about different parts of the painting. The kids were beyond excited to have a brand new court that looked beautiful and was safer to play on!

On our final day, we focused on the third category of giving back – the environment. For this project JetBlue partnered with local marine conservation group, Fundemar. Fundemar runs a coral reef restoration program, including coral nurseries, rescue centers and transplant zones, which serves to help protect the coral against climate change.

In the Paradisus Palma Real auditorium all of the volunteers gathered together to construct ocean buoys. The staff of Fundemar led us in a workshop and each pair built and spray painted their own plastic buoy. Like many other coastal countries around the world, coral reefs in the Dominican Republic are under threat by climate change and marine pollution. These buoys help signify to boats which areas have fragile coral reefs, so they can avoid dropping anchor. We ended up creating 60 buoys that will be placed into the ocean to protect the local coral reef beds.

Overall, we were really impressed with how JetBlue for Good approaches its social impact initiatives. During the trip there was a real focus on partnering with local organizations and working on projects that will continue to do good long after the volunteers had gone home. The local partners were groups that JetBlue had previously established a relationship with. The special education school, for example, was a project that local JetBlue crewmembers in Punta Cana identified and had already been working with.

Collaborating with local groups also helped JetBlue address what needs they could meet in the community. We spoke with Icema Gibbs, the head of Corporate Social Responsibility at JetBlue, who emphasized that these initiatives weren’t created by a bunch of execs sitting in a New York office and assuming what the needs of the communities are. Crewmembers are a part of their communities in all JetBlue cities, and the local crewmembers in Punta Canta played an active role in guiding the #CheckInForGood trip.

We worked with local crew members in the Dominican Republic make those local connections and to ensure we were having the biggest possible impact. These partnerships also ensure the sustainability of these projects and allow JetBlue to continue to support the education and environmental initiatives. 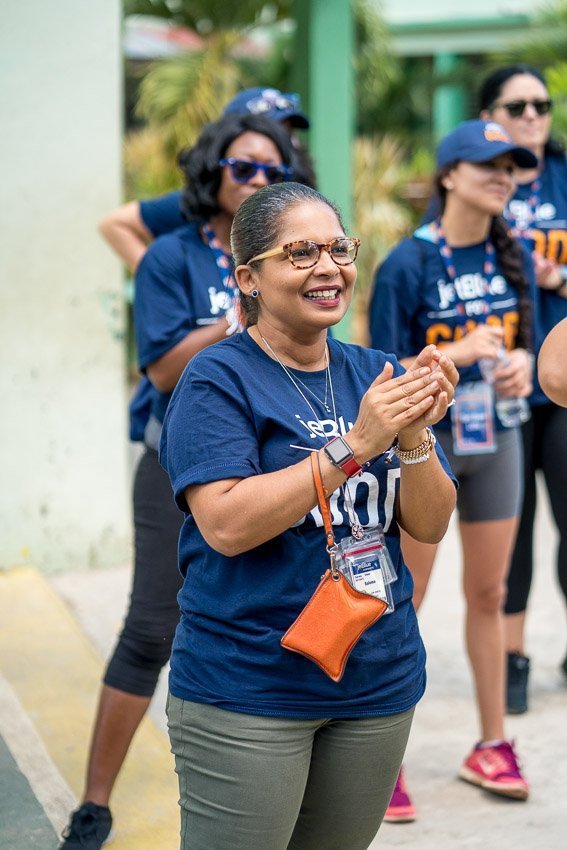 Other JetBlue for Good Projects

JetBlue’s mission to do good isn’t just isolated to the JetBlue for Good month of November. They’re doing good around the world, all year long. Last year 22,000 JetBlue crewmembers volunteered over 180,000 hours of their time.

For example, JetBlue runs volunteer activities for Martin Luther King Day of Service, as well as provides “GreenUp Grants” to organizations in the cities they serve for Earth Month! They also run a summer reading program called Soar with Reading, encouraging kids to read by giving out books through book vending machines!

With all of these incredible initiatives, it’s obvious how committed JetBlue is to doing good. Throughout the #CheckInForGood trip, we were continuously impressed with the attention to detail and the effort put in to each project. From the painting of the first classroom on day 1, to the making of the last buoy, we have no doubt that every volunteer walked away feeling ignited to do more good. And most importantly, we know that the communities JetBlue serves in the Dominican Republic will continue to thrive with their support. 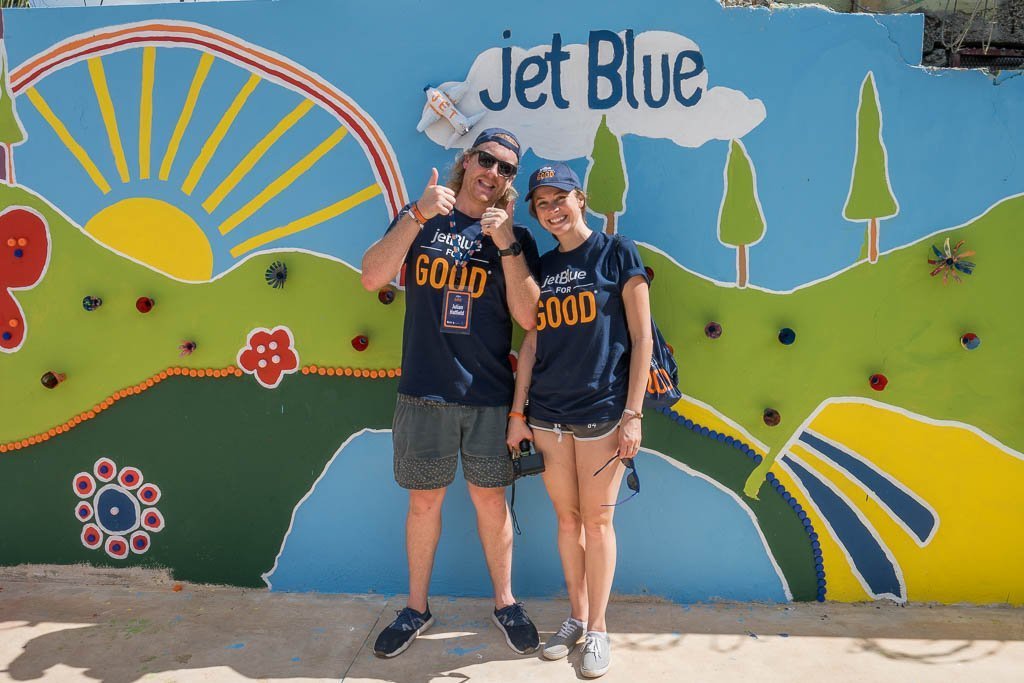 1 thought on “JetBlue For Good: Volunteering in the Dominican Republic”