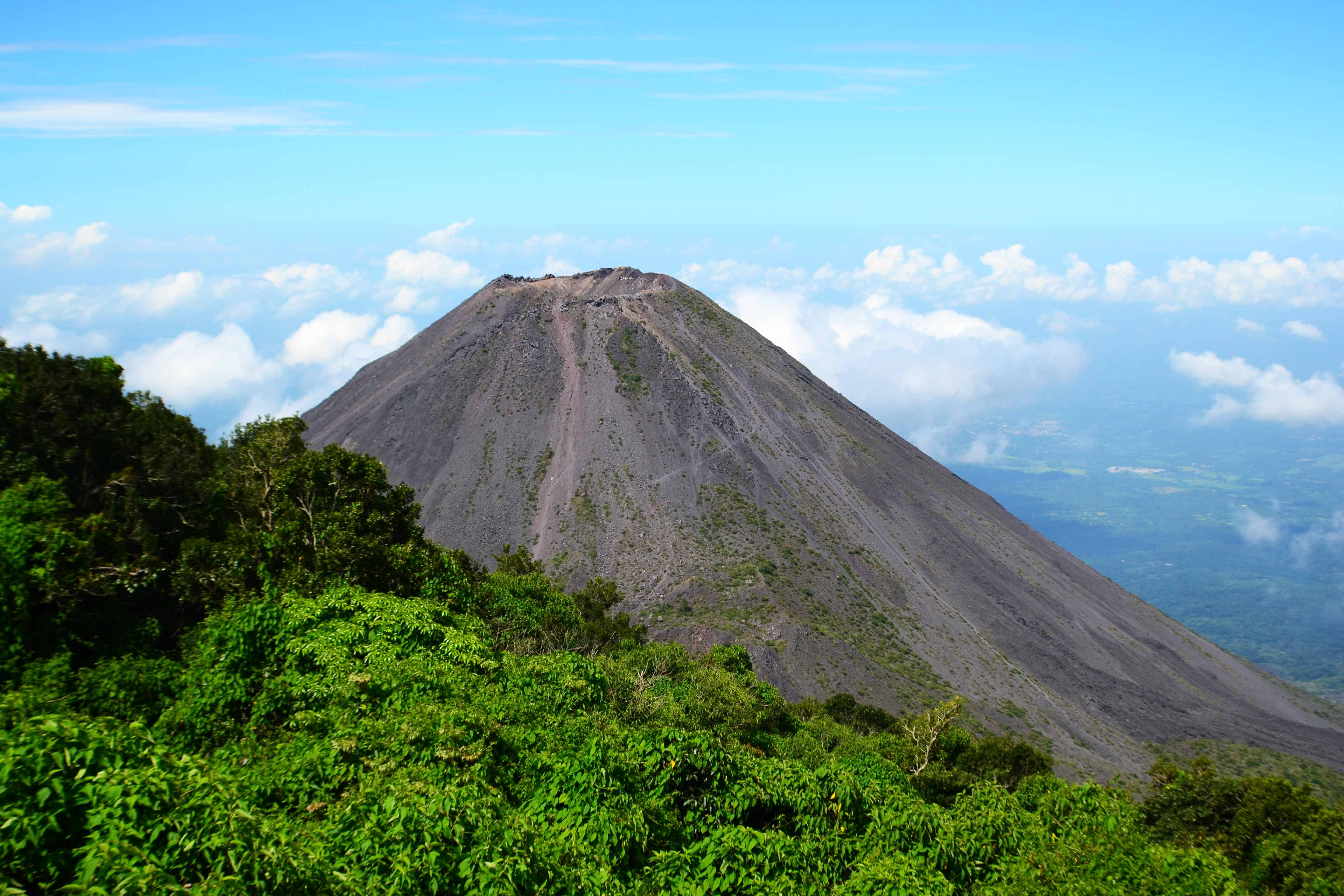 Although only a small country, El Salvador packs a serious punch when it comes to activities for the adventure backpacker. Sometimes over looked or rushed through by passing tourists, El Salvador is fast making it’s way onto the backpacker scene with it’s wide variety of natural beauties to be explored.

What better way to break into that scene than hiking the Santa Ana volcano? El Salvador’s highest and most active volcano! The Santa Ana volcano (vulcan Llamatepec), at almost 2,400m (7,850ft) in height, offers some beautiful panoramic views of neighboring towns and scenic landscapes from the top. But the highlight is undoubtedly the stunning turquoise lake that sits in the centre of the crater.

Accessing the volcano is best done from the nearby city of Santa Ana, where public bus schedules match the tour companies, and the whole day trip to Santa Ana volcano can be done without signing up for an expensive tour (see a full list of directions at the bottom of the article).

Once you get to the park that sits at the base of the volcano you will have to arrange the ascent with one of the official guides. They’ll take you up, escorted by one or two policemen, to ensure a safe journey to the top. The police, wielding their firearms, are there to stop any potential bandits from robbing you along the way. Apparently in the past, unknowing tourists taking on this trip themselves would occasionally be robbed, but it’s super safe now and the police ensure no one tries any funny business.

How Difficult is the Hike?

The hike itself isn’t too difficult, but a basic level of fitness will definitely help you ascend to the peak without being out of action for the next week. It’s roughly a 4 hour road trip hike to the volcano, which includes some time at the top to take in the views. The beginning of the hike goes through some flat areas, which are pleasant and relaxing, before you hit the main ascent.

As you’re nearing the top you’ll start to smell the authentic sulphur scent that oozes out of the volcano and when you finally get to the craters edge, dripping in sweat, it’ll all seem worth it. An eerie mist of steam simmers across the top of the crater lake, as the colors dance in the sun light, switching between shades of turquoise, blue and green. But don’t be fooled by it’s alluring glow, especially when all you want to do is cool down, unfortunately this is one crater lake you can’t swim in.

Now you’ve mad it, spend some time up at the top, you’ve earned it! The views are incredible. Every now and then a distant cloud may approach, sliding across the top of the crater temporarily obscuring your view below, but wait it out because they pass fast. There isn’t too much area up top to go exploring, but find a spot to yourself and take a moment to take in all the beauty that lays before you. From the top you can look down to another small volcano, the large lakes that surround the area and the speckled spots of towns in the distance.

On the way back down the volcanoes the guides are pretty keen to get to the bottom. They’ve finished their job and want to get back to kicking it in the park, but don’t let them rush you. The two police who escorted us from behind were more than happy to just amble along behind us and chat about the latest soccer results. They’re on the government clock, so they are in no rush. This gave us a great opportunity to really appreciate the beautiful views that we missed while powering through on the way up. 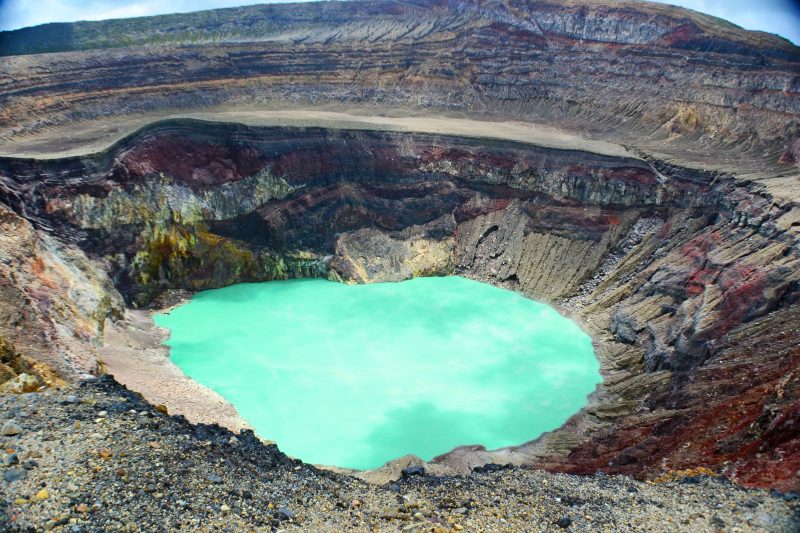 Getting to the Volcano from Santa Ana

1. It’s an early start to get the #248 bus at 7:30am from La Vencedora bus station. If you’re staying away from the station you can also pick up the bus as it follows Calle 25 out of the city. Ask your hostel for the best directions. 1.5hrs – 90c

2. Arrive at Cerre Verde National Park between 9-9:30am after a nice scenic drive around Lake Coatepeque. Pay $1 to enter the park, and then kick your feet up for a couple of hours. The tour doesn’t start till 11am. There’s a small comedor serving basic food, coffee and snacks that is good to kill some time.

The Hike Up Santa Ana Volcano

3. The tour leaves for the main crater at 11am with a guide and a couple of police for security. Pay $1 for their services, but don’t be alarmed, the police are just a precaution. Nobody has had any trouble with bandits on route to the crater once the police escort started.

4. After a half hour leisurely cruise you’ll cross some private land, where the owner will be ready and waiting to charge you another $1 just to cross through his gates. Unfortunately the route to the volcano goes through his land and this is another little tax you have to pay. Handy little business he’s got going on if you ask us!

5. Soon you’ll hit the official park entrance to the Santa Ana volcano, where you need to pay the rangers the entrance fee. It costs $6 for a foreigner or $3 for a national.

6. After another hour or so and you’ll hit the crater at the top. You can smell the sulphur as you reach the outer rim. Depending on how fast you made it up you’ll get a little bit of time to hang around and take in the views. Most guides want to start getting down by 1:30pm. 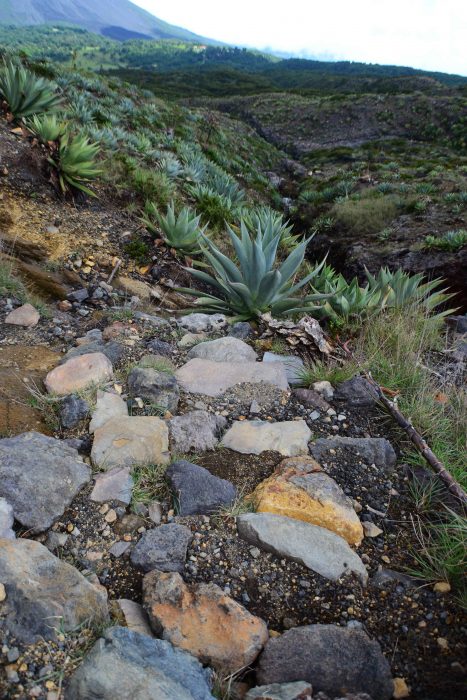 Getting Back to Santa Ana

7. You arrive back at the park entrance by around 3pm, but you’ll have to wait till 4pm to get the bus back into Santa Ana. This gives you time to relax a little and stretch your legs before jumping back on the bus.

8. The bus can take between an hour and an hour and a half to get back in the city. You’ll get back to Santa Ana from the volcano around 5:30pm and it costs 90c.

9. Alternatively look for people who are driving back into town and try hitch a lift. Many people hire cars for he day and they’re likely to be on your same tour going to the crater. Make friends with them and see if you can get a lift back. We were fortunate enough to meet a few other travelers who had rented a car for the day. Bingo!

Total time for the day trip to El Salvador’s most active volcano is 10 hours and $12.80 for transport and entrance (or $9.80 for a national). It’s a fun, adventurous activity that shouldn’t be missed if you’re spending time in El Salvador. One extra tip, bring some snacks, especially if you’re a vegetarian, where the options are  fairly limited at the comedor. You’re going to get hungry, especially after the hike!

Continuing Your Travels in El Salvador?

If you’re continuing to travel in El Salvador be sure to check out some of our other popular articles. 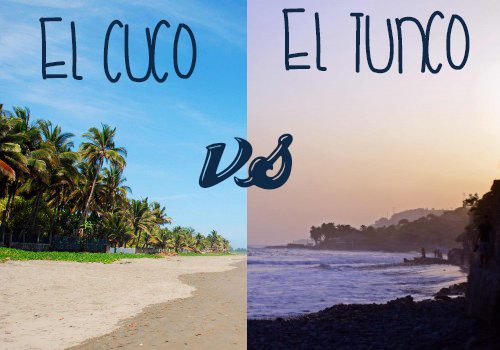 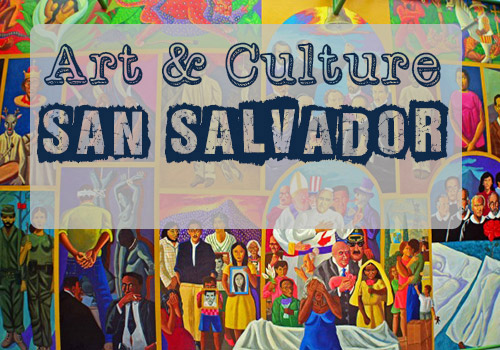 31 thoughts on “Hiking the Santa Ana Volcano in El Salvador”