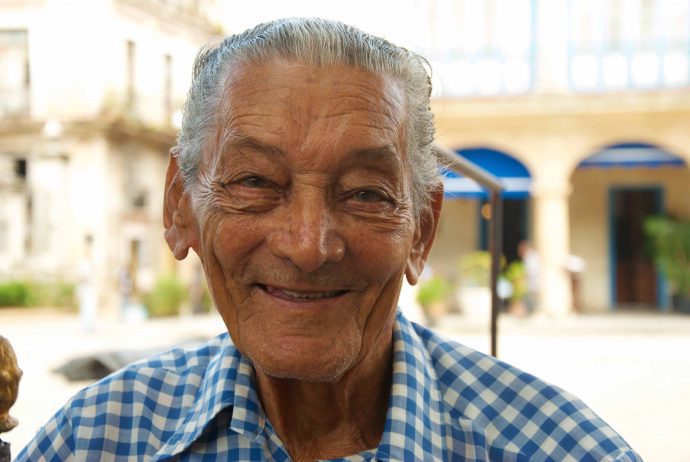 Meet Ernesto, Ernie for short. We met Ernie on a park bench in Havana, Cuba. Just moments before he sat down, a different man had been sitting beside us, smoking a cigar. I was silently trying to get the courage up to ask for his photo when Jules confidently struck up a conversation and snapped his portrait. After he left I was kicking myself for whimping out on the shot. Jules gave me a little pep talk and encouraged me to ask the next person who sat down, whoever they might be. Then came Ernie. Unlike the photo above he sat down in a hurry, with a scowl on his face. I peeped out a buenas tardes (good afternoon), but got no response. Jules shot me a look and I knew I wasn’t going to get out of this one.

I love taking portraits of people, especially while traveling, but it can be intimidating. I never want the subject to feel like a tourist attraction. I also don’t feel comfortable paying people for photos, and occasionally locals will pressure you for money or a gift. And then there’s the whole pesky language barrier thing.

But I realized, what’s the worst that could happen? He’d say no and I wouldn’t have the photo, which would leave me in the same place I began with. So I turned to him and gave my spiel of “I’m a photography student and would love to take your photo, blah blah blah.”

Instantly his scowl was replaced by a warm grin. He chuckled and agreed to a photo. I took the shot and we had a quick chat. Turns out he’s a security guard at night and comes to the park in the day to relax and nap. He asked us about where we’re from and about our photography. Then we said goodbye. I left with a new found self confidence for asking for portraits and he was left to nap on the bench. Thanks Ernie!