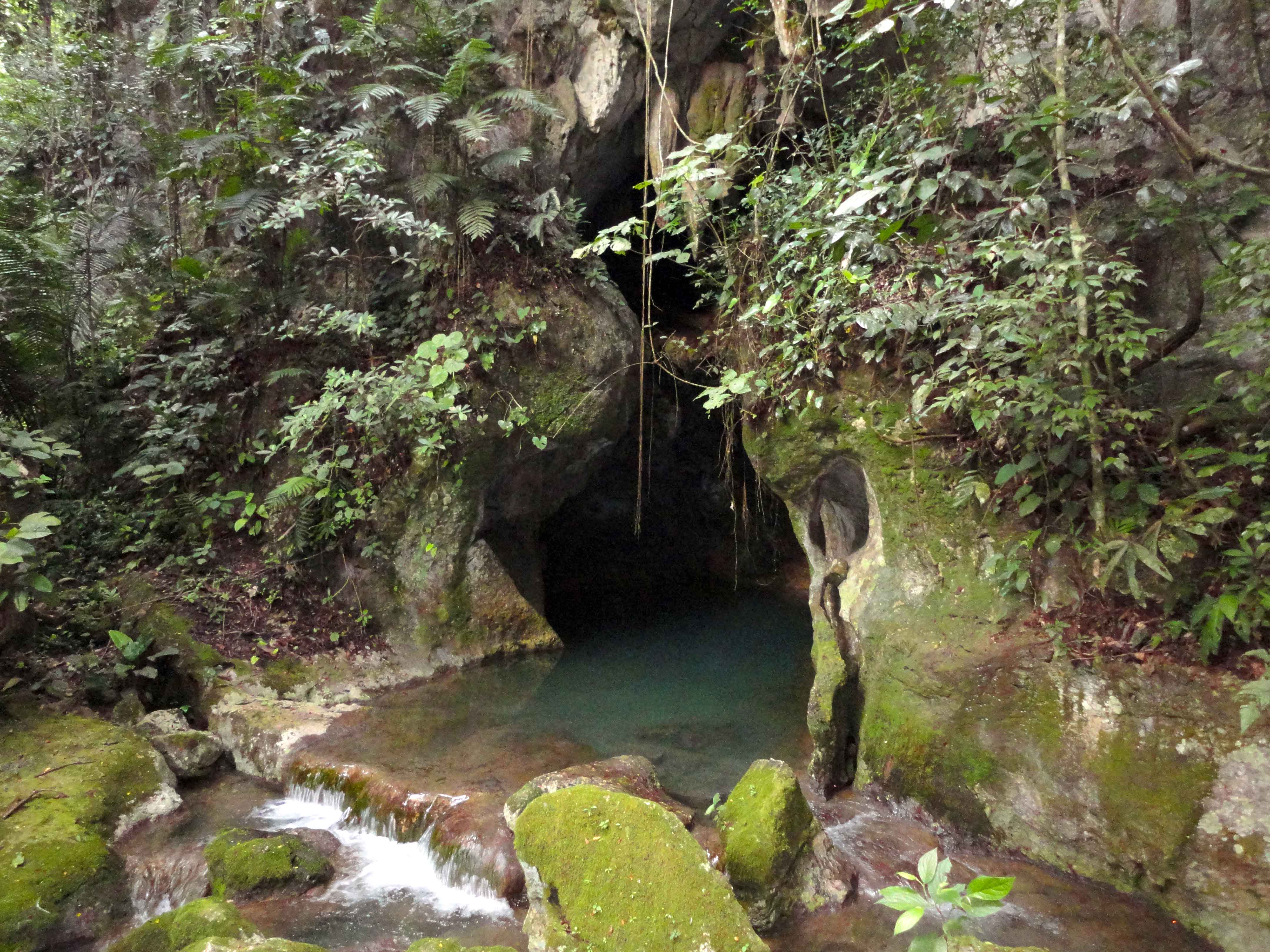 The ancient Mayan sacrificial caves of Actun Tunichil Muknal, Belize invoke a rare sense of discovery on the often worn out tourist trail. The genuine feeling of exploration makes the ATM caves tours in Belize one of the most exciting and worthwhile adventures we’ve experienced during our travels, and we couldn’t recommend it enough.

And while the Actun Tunichil Muknal cave tours aren’t the cheapest excursion, especially if you’re a budget backpacker like we were when we went on the tour, they really are an activity that can’t be missed if you’re traveling through Belize. And we sure are glad we went with our gut on this one.

Our journey starts in the quiet border town of San Ignacio, Belize after crossing over from the Tikal ruins of Guatemala. From here there are a huge selection of agencies offering the tour, but almost all of them use the same guides. In fact there are only a small amount of guides that are qualified to run the tours, which means most guides are experienced and know their stuff. It’s a full day tour that picks you up, provides lunch and water and then takes you home.

We arrive at the park entrance early, grab our gear and take off on the hike to the cave. Along the way our guide Luis tells us stories of jungle jaguars, saving lost hikers and Mayan history. After crossing through three rivers and walking for an hour we get to the cave entrance. From here it’s goodbye to the bags, and our cameras. They have enforced a strong ‘no gear’ policy in an attempt to preserve the caves. 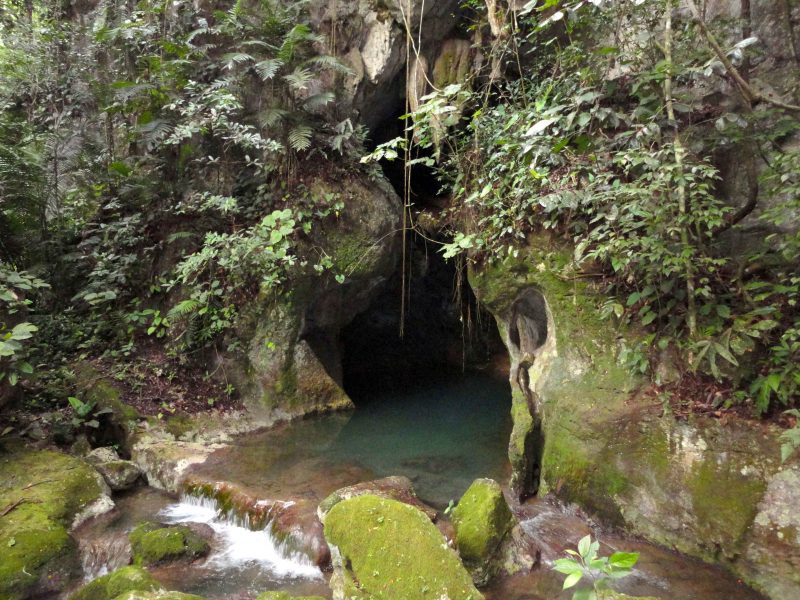 We gather at the cave entrance and jump off the rocks into the cold crisp water. Climbing up onto a ledge, the group sets off into the darkness, at times walking along the smooth rock, other times knee deep in water. Along the way Luis tells us about the cave formation, the history of its exploration and the earliest occupation by the Mayans.

If you’re claustrophobic you don’t need to worry too much. The cave itself is spacious, and only rarely are you stuck in tight spots. The cave twists, turns and has a number of different levels. For the more adventurous type there are a few challenges if you’re up to it, but ask your guide before wandering off. After 45mins we hit the end of the wet chamber and arrive at the dry chamber, where we climb up a rock and into an upper shelf of the cave. 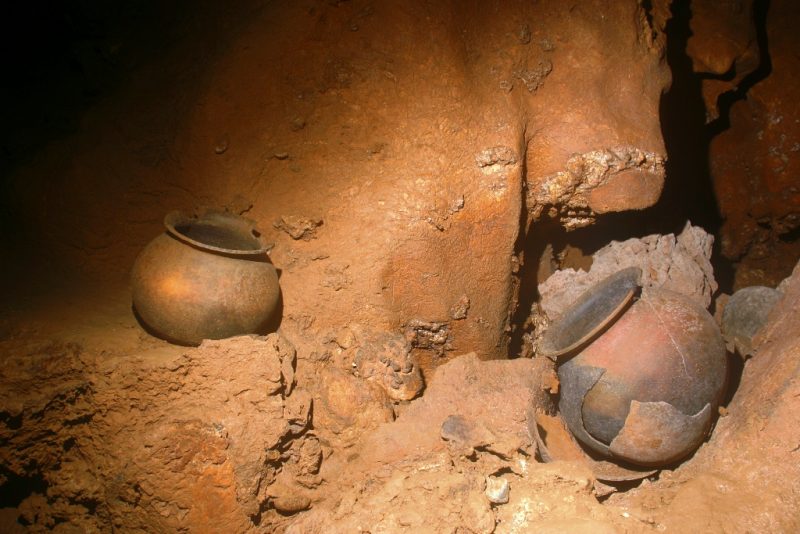 It’s here the real tour starts. Once we enter the dry chamber we’re automatically thrown back into a world two thousand years old. Antique pottery covers the floor, half buried into the cave rock and leaning against the walls. Each artefact has been left exactly how it was originally discovered, lending clue as to which sacrifices and rituals they were used for.

As we move further through the chamber we start to see more obvious signs of ancient life. Scattered human remains are encrusted into the rocky floor, preserved perfectly from centuries of calcification. Luis explains the likely events of what occurred, detailing why a skull is detached from it’s body and shows us the hidden location of a missing tooth.

We continue along the designated path until we get to a ladder and the final climb into the last dry chamber. It’s up here that we’ll meet the iconic ‘crystal maiden’ of the caves; a perfectly intact full skeleton encrusted into the rock. We ascend the ladder and hop around some rocks before we finally get into the chamber. 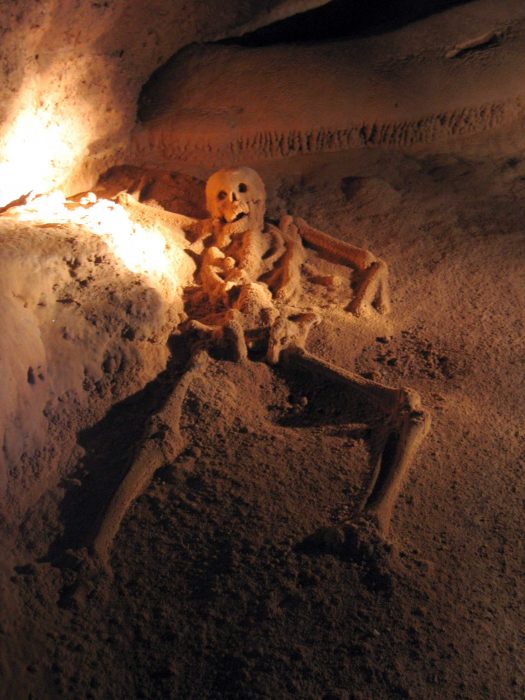 Luis gets us to turn off all our lights as he shines his single light into the darkness and upon the skeleton. The light glistens and flickers around the lime calcification encasing the skeleton and we are literally within arms reach of it. It’s a fascinating sight and we’re all left in awe. So many questions pass around the group about the origins of the skeleton, and the story behind it. Luis, who has led teams of geologists, historians and archaeologist down the cave for decades, has many answers. But listening to his stories are half the fun, so we can’t reveal everything for you.

Time to get yourself there, and make it quick. The caves have already been slowing down tourism over the years because of ongoing damage. It won’t be long before these are out of reach for the passer by traveller.  In the past it was a free for all, but now tours limit the amount of people they send in, and always without backpacks and cameras. So unfortunately you won’t get any pictures, but not to worry, you won’t be forgetting this experience for a long time.

– Depending on the season you can haggle the tour companies for a discount. Don’t go with your first price and always spend a little extra time shopping around for a discount.

– Book it! The Belize tours to the ATM caves are always changing, with more and more restrictions being applied to help preserve them. Don’t hesitate to book this trip today!

10 thoughts on “Exploring the ATM Caves in Belize: A Most Excellent Adventure”