To call Lanta Clayzy House just a hostel wouldn’t accurately describe all it has to offer. Sure there are private rooms and dorm beds, a chilled bar and hammocks to relax in, but walking into Lanta Clayzy House you feel it has a vibe that just makes it different from other hostels you’ve stayed at. There’s a community of travelers here, some passing through and some staying for months on end. The chilled out feel just sucks you in. Accommodation is basic, and the rustic style is probably not for everyone, but there’s plenty of fun to get you out of your room. It’s the kind of place you can kick back with a beer, chat with new friends and let the day melt away. 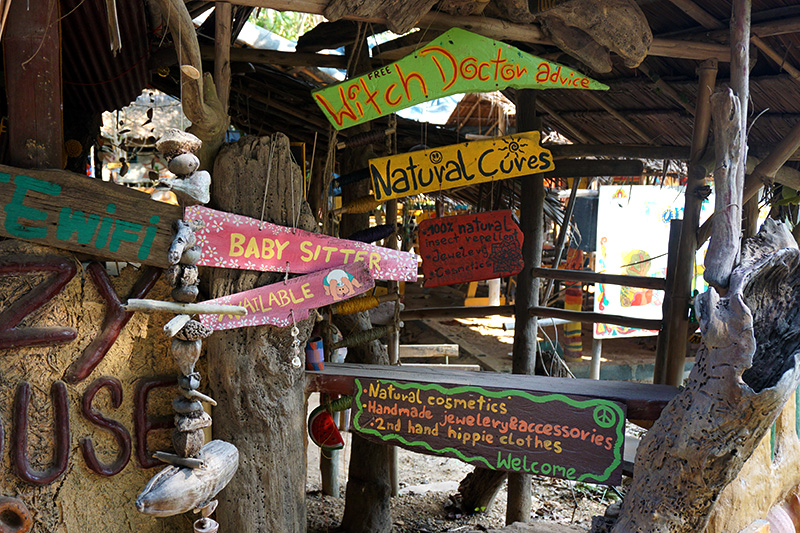 We’re not going to beat around the bush – the rooms are pretty basic. If you’re looking for luxury living, then this is not your place. But if you’re down for a simple bamboo bungalow with a mattress pad, fan and not much else, this is perfect. We doubt you’ll be spending much time in your room anyway considering the proximity of the beach. A dorm bed will cost 200-250 baht and private bungalows are 350-450. The property itself is huge and there are lots of huts spread throughout. 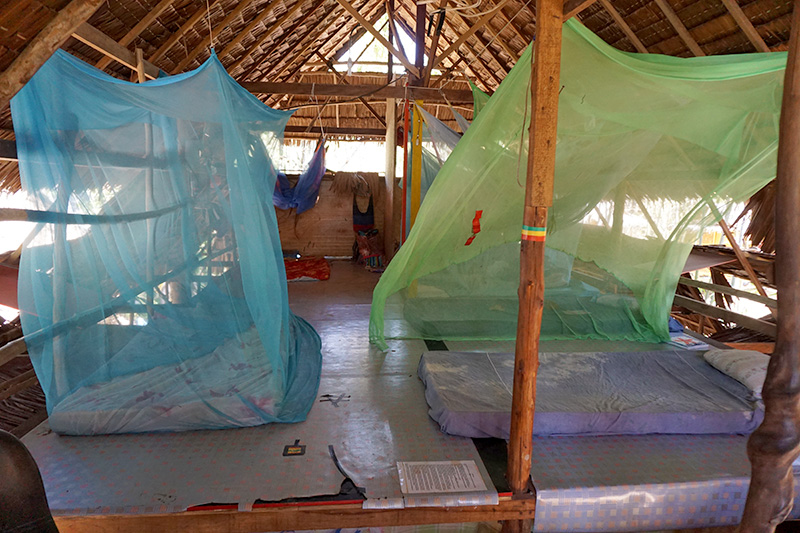 The bathrooms are actually pretty nice with a few western style toilets. The showers are spacious although the water pressure was a bit dismal. If you get stuck like me in the middle of the shower all soaped up without any water, just give a holler to the front desk and usually they can fix up the water tank.

Other than rooms and bathrooms, the property has some pretty cool little extras. Paintings done by guests and workers line the outside of the huts and aerial silks hang from trees for the free classes available. There’s no kitchen for guests, but the hostel does cook a daily menu for purchase.

Clayzy House almost feels more like a camp at Burning Man than a hostel. It’s the kind of place that you might plan to stay for a night or two, then end up staying for a month. The vibe is definitely chilled out, with lots of common areas to hang out. During the day there’s always at least a few people kicking it on the hammocks or at the picnic table, enjoying a day of creating art or just chatting. At night the hostel bar has music playing (feel free to put on something you want to share) and pre-drinks are sold before heading to whichever bar has a party that night. 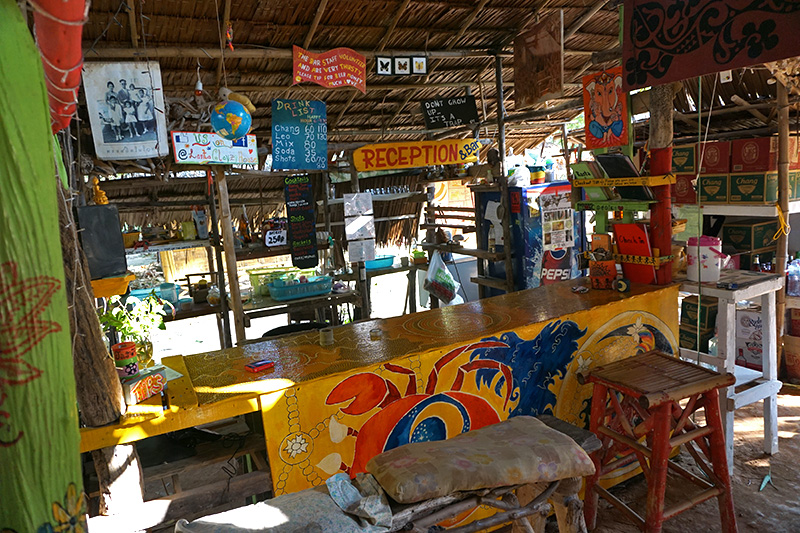 There’s a fair few travellers working at the hostel in exchange for room and board, and it first it can be a bit difficult to figure out who is a guest and who isn’t. Everyone is friendly, though, and we were immediately greeted with smiles when we came in. This seems like a place where the longer you stay, the more you get out of it. Because of the tight bond of the group of workers, if you only come in for a night or two, you may not get the full Clayzy House experience. Still, if you’re only there for a few nights there are plenty of other travelers to chat to and it seems that people are always down to hang.

If you want to be in the backpacker hub of Koh Lanta, Clayzy House is the place to be. About a 10 minute taxi drive from the pier, the hostel is located on a little dirt road that’s barely visible from the main street. This unassuming street is packed with hostels, bars and restaurants. At the end of the street, and just a minute walk from Clayzy House, is Long Beach. Even though this beach is popular with travelers, there’s a long stretch of sand that makes it possible to secure your own spot. After spending the day exploring the island there’s nothing better than going for a sunset swim and then easily heading back to the hostel for a shower. 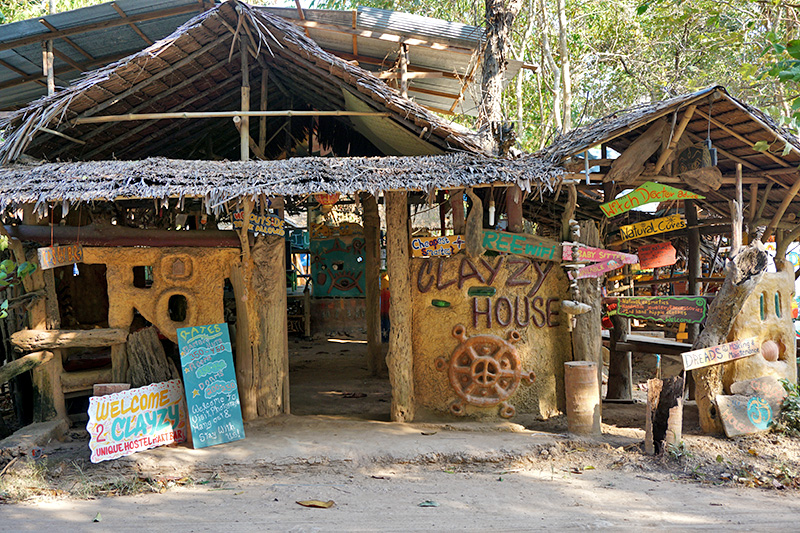 The main road is just a couple minute walk from Clayzy House making the main town very accessible. Just across from the hostel is a minimart with snacks and cheap beers. The picnic tables outside fill up at night where backpackers gather to pre-drink before dispersing to the nearby party. Outside the minimart are usually a couple food vendors including a guy that sells huge plates of Pad Thai for 40 baht.

The bars on this strip seem to alternate hosting the nightly party. Sometimes there’s acoustic tunes or an open mic, but toward the end of the night the electronic beats start pumping. If you’re looking to party, Clayzy House is really close to the bars which makes stumbling home at night super easy. If you want a quiet night in, though, prepare yourself with earplugs because it can get pretty loud. 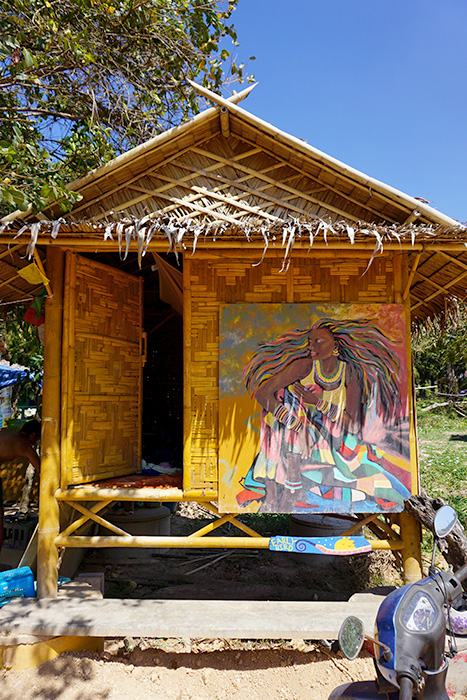 Although the accommodation is fairly basic, Clayzy House Koh Lanta is still good value for money.  At 400 baht a night you’re not getting an air conditioned room with a minibar. Instead you’re getting a simple hut, basic facilities and access to the community of travelers that is really the hostel’s best feature. There’s always a group hanging out in the main area and the people working the front desk are a wealth of information on what to see in the area. Whether you’re looking for new friends to explore the island with or homies to kick it on the hammocks after a day of hard partying, you won’t have trouble finding them at Clayzy House. The hard part will be tearing yourself away when it’s time to go.

Thanks Clayzy House Koh Lanta for putting us up for a couple of nights and letting us join your awesome community. If you’re headed to Koh Lanta book a night with Clayzy House.