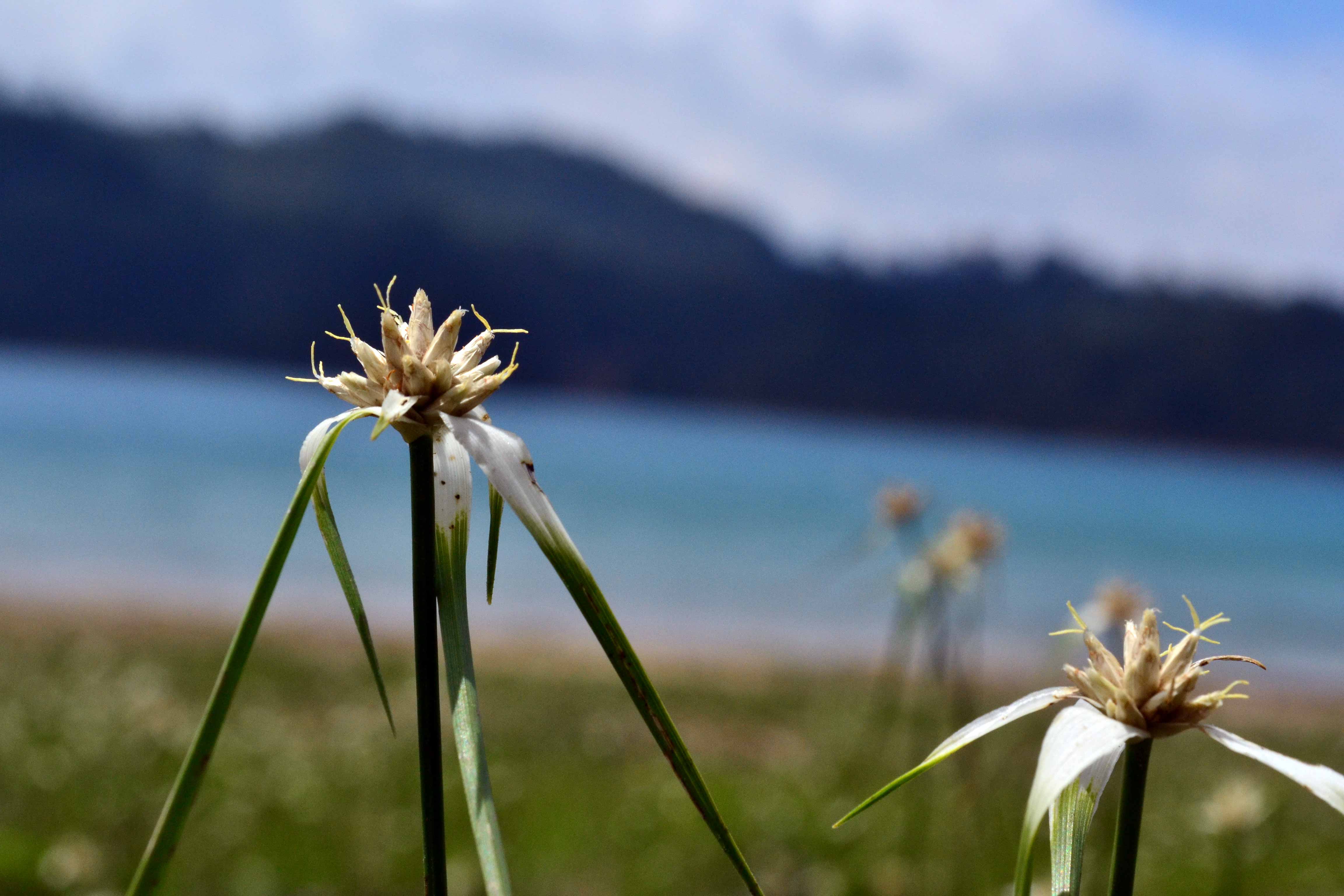 Ever have those moments when traveling where everything seems to be going absolutely wrong? And then things get worse? Somehow those moments of sheer disaster are always the ones that you look back at and think, “Wow. What an adventure.” This was one of those times. 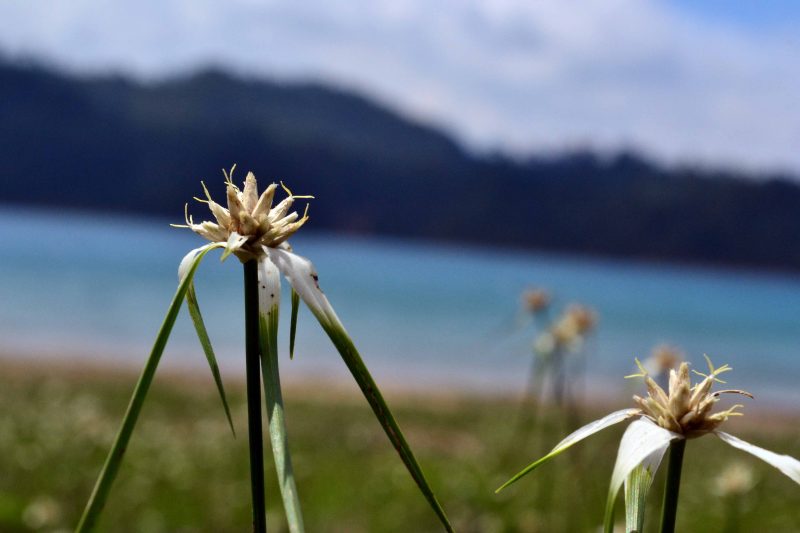 “Travel is glamorous only in retrospect”

We had decided to go camping at Lagos de Montebello on the recommendation of our roommates in San Cristobal, Chiapas in the south of Mexico. Fifty-nine gorgeous lakes spread out over thousands of acres, it sounded like the perfect weekend getaway. We packed up our double hammock, some canned food and our trusty Swiss Army knife and were ready to rough it.

But when we got to the campsite, well, there was no campsite. Only a rundown park by the lake. By park, I mean a shabby patch of grass, some trees and a couple of benches.

A little thrown, we began scanning the area for a suitable place to hang our hammock. We tried a number of different combinations of trees, all with gaps either too big or too small, before we found something that would work. A Mexican family that had just wrapped up a BBQ stood watching us, from their truck. We tensed up waiting for questions, to be kicked out or worse, to be laughed at. But they greeted us warmly and offered their leftover firewood. Just as they were pulling away, I asked how safe it was to camp in the area.

“Muy seguro” they all confirmed, very safe. Still, I noticed a look of concern pass over their faces. Maybe it was just a reflection of my own worry. 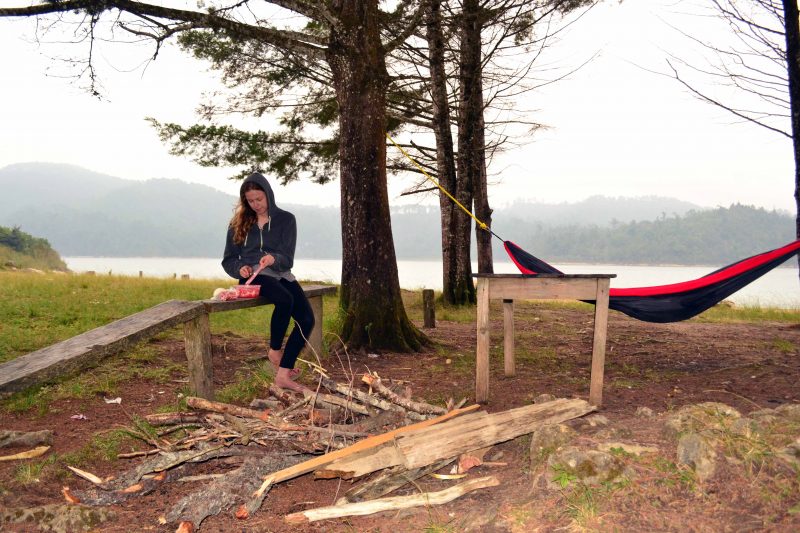 I tried to put on my balls of steel, seasoned traveler face, but I was nervous. If anyone back home knew I was spending the night in a hammock in the middle of a dodgy park in Mexico, they would think I was nuts. Still, here we were.

While the campsite wasn’t what we’d hoped for, the area was gorgeous. The lake was huge, the water a deep blue and completely placid. All around us we were surrounded by brush and distant mountains.

After a long, but successful, attempt at building a fire we cooked a dinner of canned beans & corn wrapped in tortillas. With full bellies, we actually began to enjoy our adventure. Nestled up in the hammock, we read our books until the last of the daylight dwindled. After some maneuvering in the double hammock, we were ready to sleep. It was a bit drafty, but my nerves were finally calmed. 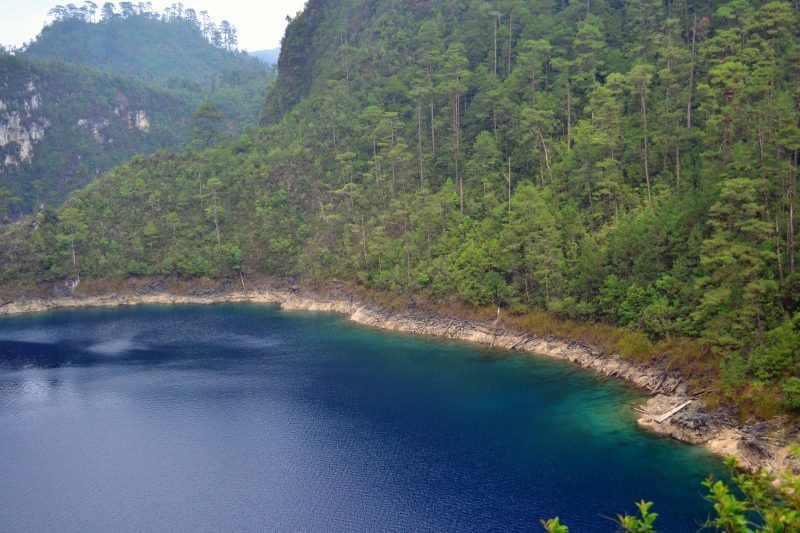 Not long after we fell asleep, I awoke to the sounds of crunching of leaves. I opened my eyes to see a completely new scene. A thick mist had enveloped us, making it difficult to see even the trees around us, looking like a replica of a horror movie set. I still heard the crunching and finally I could see a black outline of a man making a bee-line toward our hammock. I had woken up and landed in the middle of a scene from Mexican Friday The 13th.

I wanted to scream but all I could do was whisper to Jules to wake up. After a few nudges, he finally did. Jules shouted out and the man stopped just a couple feet from us.

“Soy policia! Todo bien!” He shouted back and then just as quickly as he appeared, he disappeared out into the mist.

I wanted to cry. If there had been a Ritz Carlton down the street, I would have paid an exorbitant amount of money just to say in the lobby. We tried to convince ourselves that he was, in fact, the police, checking to make sure we were safe. But my scary movie watching, overactive imagination made me terrified. The next couple hours I lay alert in the hammock. My mind flashed with fear of cartel kidnappings and every horror villain I could think of.

Somehow I managed to fall into a restless sleep, my body completely exhausted from the day. Around midnight I woke up again. Not to any creatures lurking in the dark, but to a relentless rain beating down on us. We decided to wait it out, hoping the rain would pass. But instead it just got heavier and we were forced to flee to a nearby shelter. We used our flashlights to gather up our belongings and hang up the hammocks once again. After settling back in, we tried to sleep but the rain landed on us in horizontal sheets. 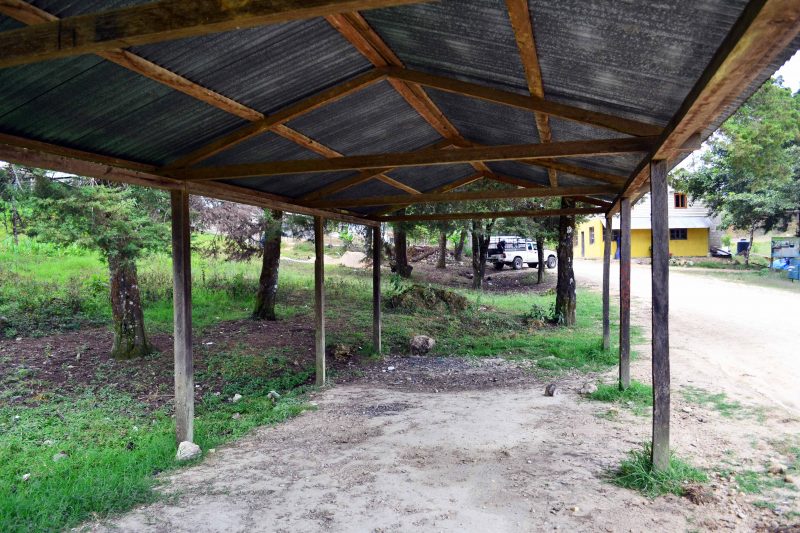 { our shelter from the rain }

In the morning, we felt like we’d been through war. After 2 years of traveling, it was easily the worst night sleep we’d ever had. With creaking bones, we returned to the clearing to revive the coals from the previous night’s fire. We heated up the leftovers and sat down to enjoy our breakfast. As the day got lighter and warmer, we began to relax and enjoy the scenic view. Our relaxation was limited though, as noisy children began to spill out of the school across from us. They assembled on the black top nearby and stared wide-eyed at the two homeless looking gringos making breakfast over a fire in their park. I can only imagine the rumors that must have been flying around that school about us.

Exhausted, achey and feeling pretty defeated, we decided to take a short hike around the area before heading home. In the daylight everything looked much more inviting. The cold began to lift and the lake was absolutely picturesque on such a clear day. We walked along a trail until we hit a marker that signaled the official border with Guatemala. After some obligatory picture taking (look ma, I’m in two countries at once!), we stopped by the nearby gift shop, well more of a shed stockpiled with handicrafts. 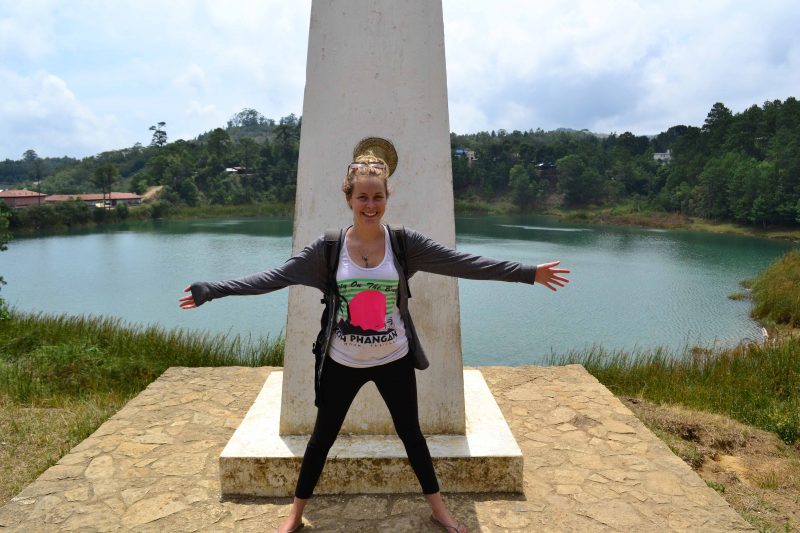 { on the Mexican/ Guatemalan border }

On the walk back, just around the corner from where we slept, we finally spotted the actual campsite. On a beautiful patch of grass overlooking the lake sat two wooden shelters perfect for hammocks. Nearby there was a lovely lodge complete with bathrooms and a restaurant. We contemplated staying another night to take advantage of the luxurious amenities, but couldn’t bear the thought of another cold sleep in the hammock. As we walked away we cursed ourselves for not walking a bit further the day before to find this paradise oasis. But as we talked over the night’s events, we realized that we may have not gotten the best night’s sleep but we did truly “rough it” and we now have a badass story to tell. 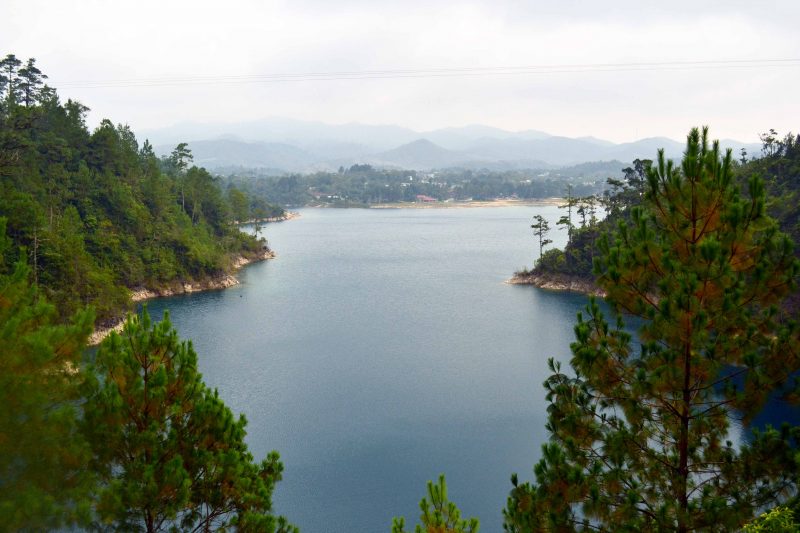 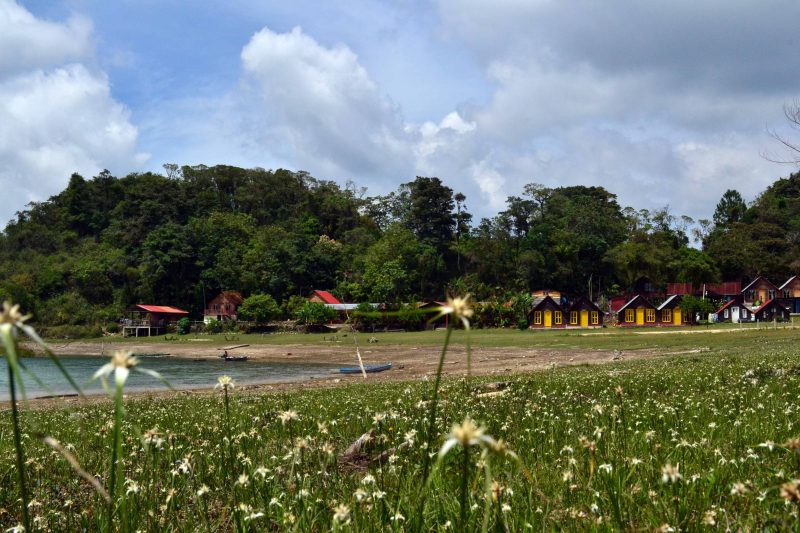 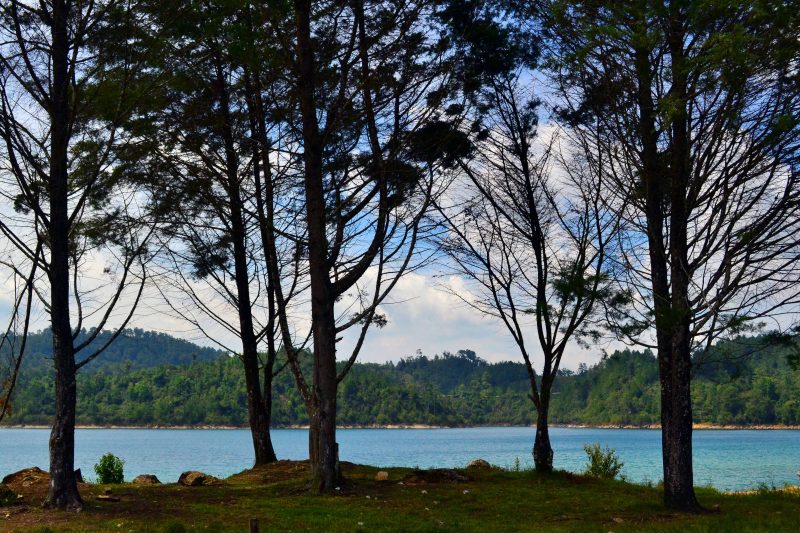 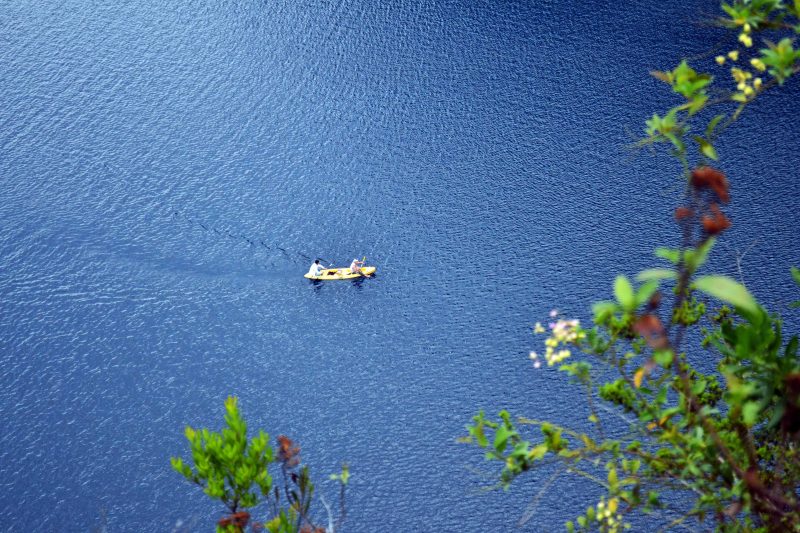 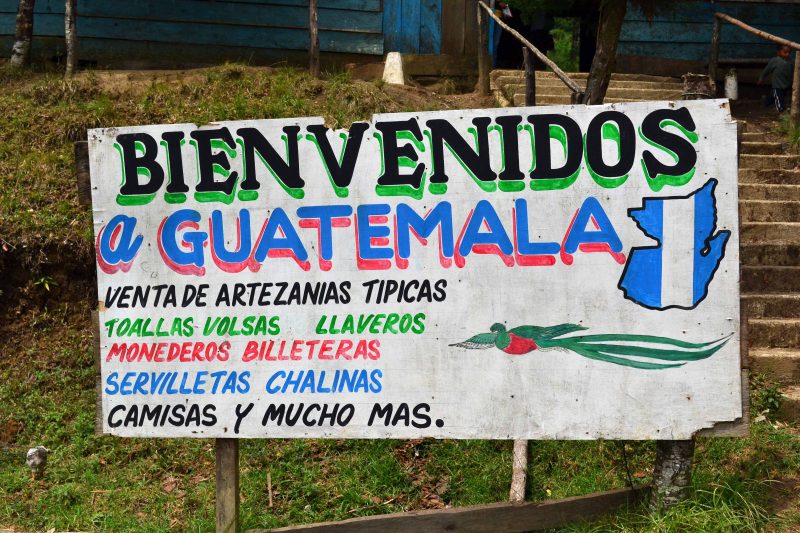 Have you had any misadventures while traveling? Were they worth the story or just a big fiasco? Tell us your most disastrous traveling moments!

17 thoughts on “Misadventures in Camping at Lagos de Montebello”