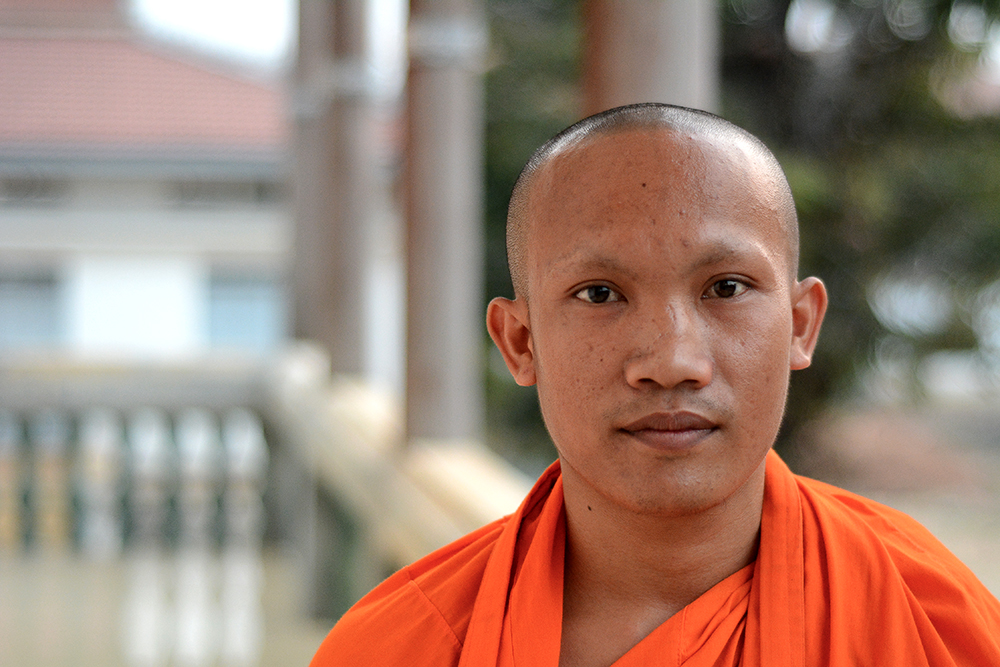 After a long delay we’re happy to bring back the popular segment Friday Faces! A photo collection of the interesting and unique people we met throughout our travels. This week we bring you a super friendly Cambodian monk that we met in the province of Stung Treng.

At the end of a long day exploring the quiet, and often unvisited, city of Stung Treng I was slowly making my way back to the guesthouse for a rest. As I was nearing the last corner, and daydreaming of kicking off my shoes and letting the dogs out, I happened to walk past an old pagoda (similar to a Wat in Thailand and often used to educate/house monks). I floated past an open window and heard the familiar sounds of an English class going on from one of the old run down classrooms. Naturally I popped my head in to check it out (as any fellow English teacher would understand of course). Immediately I was met with friendly gestures and invitations to come and join in with the class. Not wanting to miss a unique experience like this I forgot my tired feet and happily accepted the invitation and made my way round to the front entrance and into the pagoda ground.

Before I even made it to the classroom I was skillfully intercepted by a very enthusiastic and friendly monk. He spoke a little bit of broken English, but what he lacked in vocabulary he definitely made up in confidence. He quizzed me on all kinds of random topics, no doubt odd lessons he’d studied here and there. Conversations ranged from family and Australia, to Cambodian food and something about religion I didn’t quite understand.

Next he offered to take me inside one of the locked temples to view a sacred buddhist statue and take a picture as a souvenir. On the way to the temple he continued to practice every last word of English that he knew, rapidly spitting out sentences and then trailing off to other topics and completely new sentences. I tried my best to keep up with him, but it was to nice to hear him so eager to show off his skills when sometimes the Cambodian monks can be pretty reserved.

As we made our way up the temple stairs a crowd of other monks began to gather around and watch what was going on. They shyly waved back at my introductions, remaining friendly, but they kept their distance and strength in numbers. When we entered the temple I was awe stuck by the beauty and intricate details of the decorations, it really was magical. I got a couple of snaps, and then my Cambodian monk buddy was insistent on taking a picture of me in front of the statue. Unfortunately I only had my fixed 50mm lens on, and it was too close, but I let him have a crack…. didn’t quite work out. 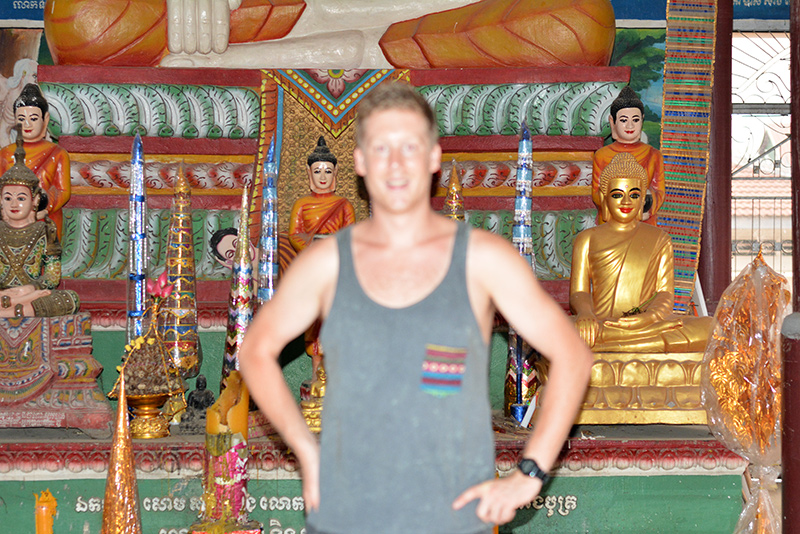 After a couple of tries we swapped roles and my new mate was more than happy to pose for a couple of portrait shots out the front of the temple. I snapped away, showing him the pictures, while he continued to chat away about all kinds of things. Without wanting to run him through a photo shoot I took a few more and thanked him very much. Before this experience I was hesitant to approach monks, especially to ask for a photo, believing that it might be intrusive and rude. Now that I’ve had this positive interaction with such a friendly guy, I look forward to chatting with another Cambodian monk interested in practicing their english!

Have you ever had an experience with a Cambodian monk, or a monk from anywhere else in the world? What was it like? Hit us up on Facebook or Twitter, or drop us a comment below!