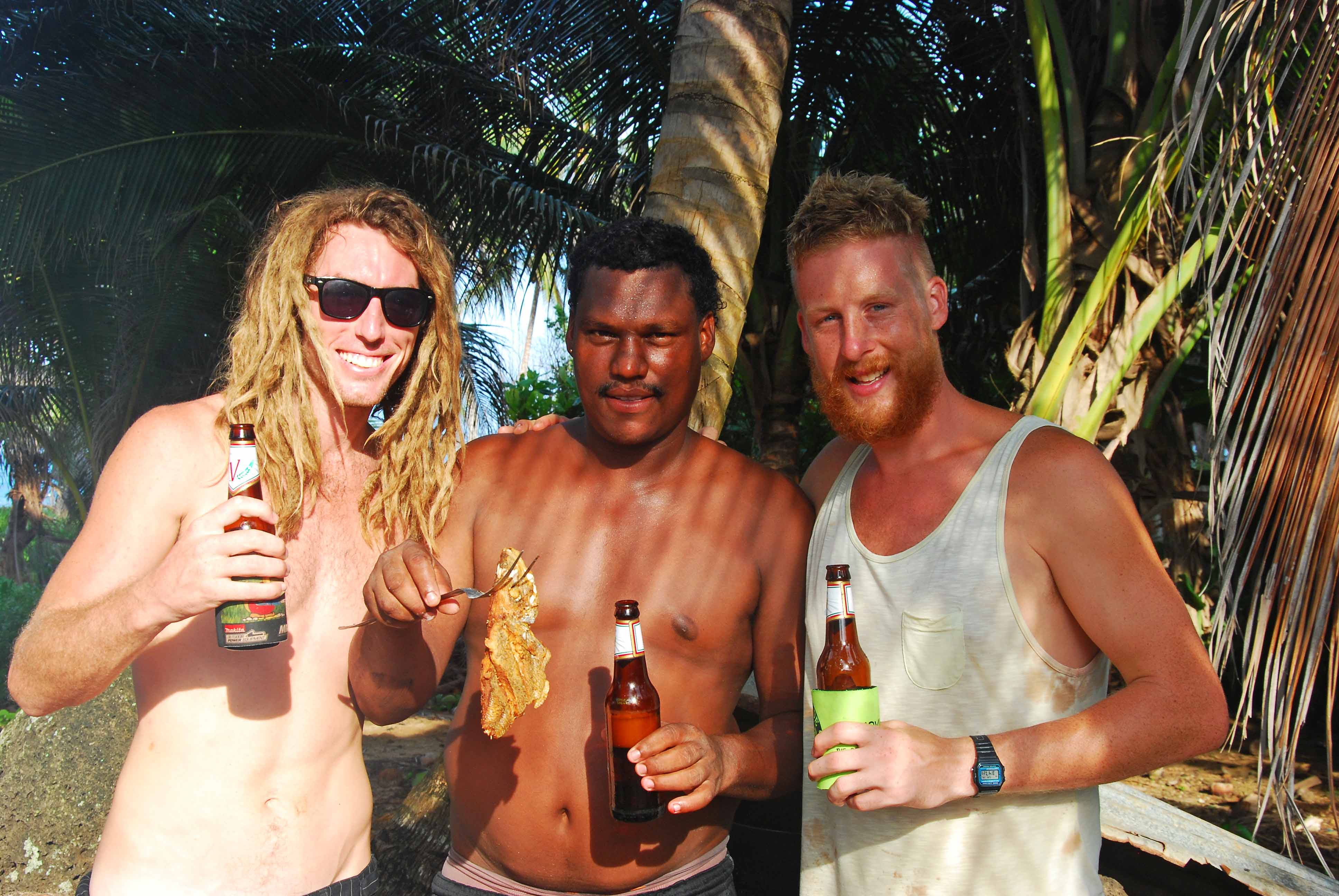 “Hurry up boy, dem fish be gone soon!” Elton playfully shouts as we hurriedly load up his tiny two-man fiberglass canoe. Today there’s three of us, and with all the gear, it’ll be a miracle if we make it back without capsizing.

We’re going out to fish for lunch, local Caribbean style. Our destination; the Caribbean Sea off the coast of Big Corn Island, Nicaragua. No fancy motored boat, no high tech fishing gear or GPS radar. Just a couple of hand lines tied onto plastic bottles, metal scraps for sinkers, a bag of frozen sardines and a whole lot of local know-how from our friend Elton.

Elton was our next-door neighbour during our week long stay on Big Corn Island. His family has owned their beach front property for generations, back when the land was cheap and the opportunistic greed for development was low. It’s what makes his spot great. A spacious beach front property, empty of town houses or apartment buildings, on the backside of the island, looking out to a distant horizon of clear Caribbean waters.

From as long as Elton can remember this house has been home to more than your average nuclear family. He is one of 10 siblings, with more uncles and aunties than you can throw a coconut at. There are nieces, nephews, cousins, grandchildren and just about every other relative you could spot on a family tree tossed into the mix. People come and go, but everyone plays a role. Some wash clothes, others cook, fix things around the house or work in local shops. The dad makes his own fresh coconut oil from the coconut trees on the family plot. And Elton is the fisherman. 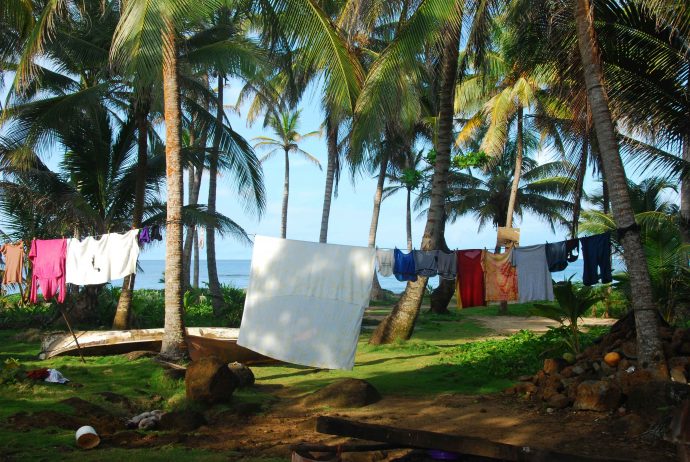 And this is where our day in the life kicks off.

“Seriously boy, dam we gonna catch some fish todey”! His English is really good, but sometimes his thick Caribbean accent makes it hard to understand. At times there’s a mixture of Spanish, Caribbean English and even some native Creole thrown into the conversations, so when I’m not sure what he’s said I just nod my head and say ‘yeah boy’, which always gets a positive response.

Elton’s canoe is definitely a homemade job, and just about everything else we’re using follows the same handy resourcefulness. One paddle is simply two pieces of wood nailed together, and the other a salvaged kiddy paddle from a children’s canoe. But it does the job, and within a half hour we’re a few hundred meters off shore. He throws his anchor, an old car’s wheel disc tied to some thick fishing rope, and we’re settled. 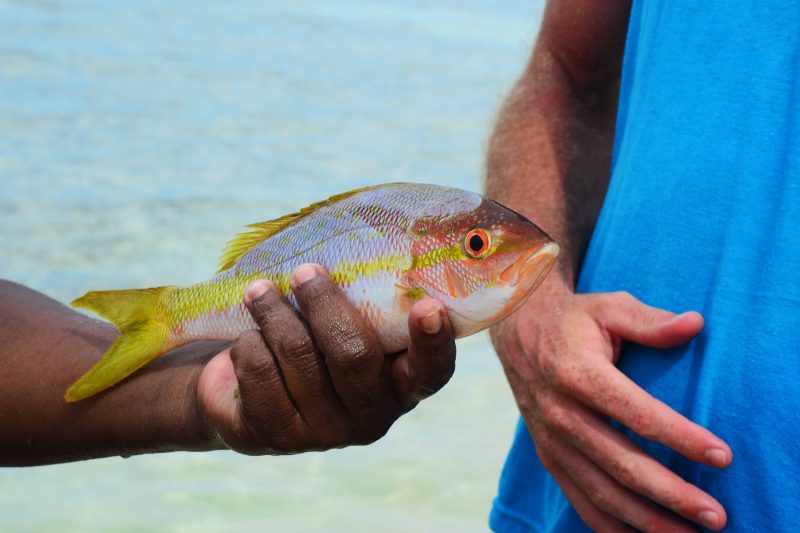 I’ve got no idea where we’re fishing; it all looks the same to me, but Elton knows what we’re looking for. He says we’re 10 ‘fathoms’ deep, and I only realise later that this refers to his ‘technical measurement’ of how many arm lengths of line he drops before hitting the bottom.

Whatever the science, it seems to work and before long we’re slinging in all types of fish. Grunt and Yellow-Tailed snapper are hungry today, and we pull up a bucket load of them within the first 20 minutes. There’s also the exotic Parrot fish, something called an Old Wife and a big old barracuda that keeps cutting our catch in half with it’s razor sharp teeth. As soon as you drop your hand line over the edge you’ve got to be on guard to yank up and snag a fish once you feel it biting. Wait too long and you’ve lost your bait.

Elton starts to tell us all about his fishing experiences and handy tips that have been passed down from generation and generation. As we rock around, and try not to capsize our minuscule vessel, Elton launches into a story about how the ocean used to be full of aggressive Tiger sharks. Just what we need!

“Oh boy, you’d fish dem wit rope and massive hooks, but be careful not to throw dem en de boat! Dem still bite ya”. But that was before his time, and he assures us you don’t see them that often now.

Either way it’s a scary thought, and when I hook something that gives a decent fight I start to get a little nervous pulling it in. It’s still fighting right up until the surface before I see an unmistakable fin pop out, followed by a fat shark’s head. 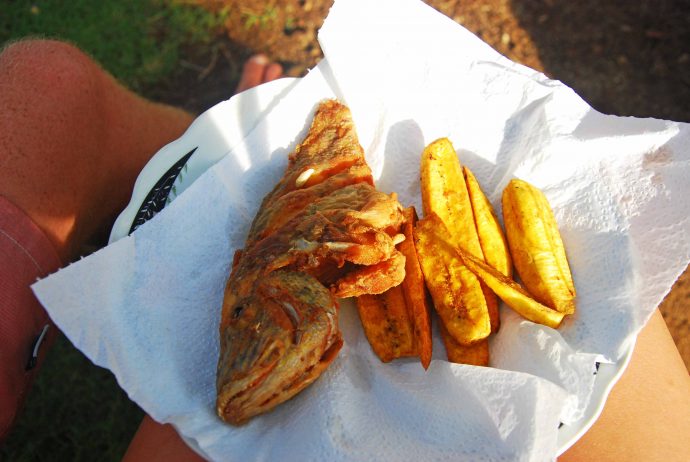 “What the hell! I’ve hooked a shark!” I scream, half with excitement and half with fear. My first thought is, what the heck do I do with this? Before I have too long to worry Elton yells over, “give me dat boy, don’t put dat en de boat!”

I pass over the line and he takes care of it with ease. It’s a nurse shark, 2-3ft and not particularly dangerous, but try thinking that while it’s all but jumping into your lap. Needless to say it was a definite highlight and an encounter Elton retells at least a dozen times throughout the day.

After a mammoth haul of fish, something like 35, we decide to call it a day.

Once back on the shore we’re starving, but the job isn’t done yet. Like a one man machine, Elton one by one scales, cuts and prepares the 35 odd fish we brought in. I’d offer to assist, but he has a routine that sees the work done within the hour, so I provide conversation. Elton describes the preparation and cooking steps. 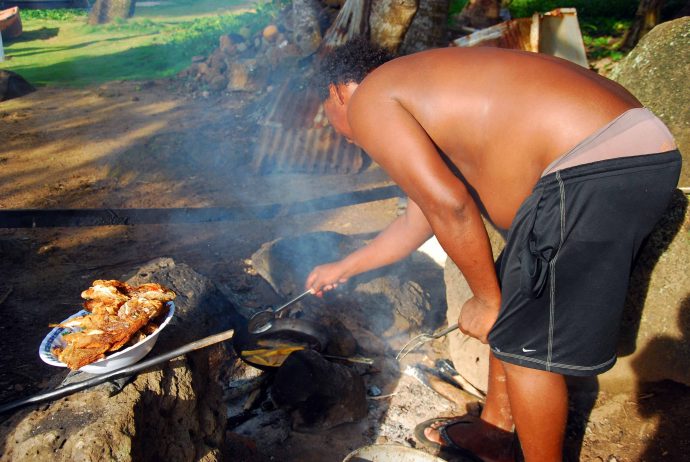 Once gutted, the fish get washed out with clean water and then stuffed with a combination of salt, black pepper, garlic and lime juice. Dabbed with a bit of flour on the sides, they’re then placed into a bubbling pan of 100% freshly made coconut oil to deep fry. The same fresh coconut oil his father prepared that day. They’re cooked until golden brown, with some sliced up plantain chips.

And the taste. Wow. Deep fried crispy skin, yet scrumptiously succulent on the inside, with a hint of special seasoning. We cook up for everyone in the house, and suddenly people from all around come out of the woodwork for a delicious lunch. A whole massive dish of food and we all eat until we can’t eat anymore. Laughing and retelling the stories of today’s catch. 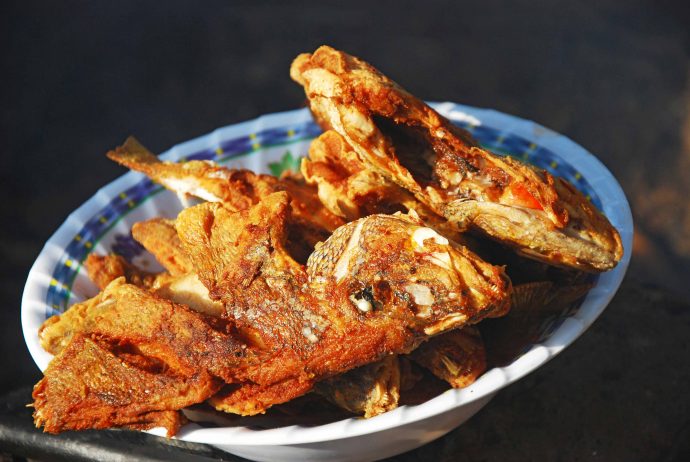 After dinner it’s time to relax. Elton drags out a 5ft speaker from inside the house, noticeably proud of how big this thing is. We’re expecting the brutally obnoxious beats of reggaeton music, but are surprised but the subtlety smooth sounds of country music. From Spanish country ballads, to Kenny Rogers, Elton is in his element sitting around with friends, drinking some rum and listening to guitars twang about broken hearts and broken hands.

As he explains, Big Corn, in the past, was without any real radio station of it’s own. The only thing they could pick up was a country music station from the mainland. Whole generations grew up on nothing but country music, and like a big barracuda, they’re hooked. So this is what gets played most of the night.

The night continues on for a few hours and we get through some cheap sugar cane spirits. A couple of dollars for 2 litres sees that we’re done and dusted by 10pm. One last drink to top off the night, a sneaky pick at some remaining fish, a massive hug and we call it a night. After all, the early fisherman gets the fish!

2 thoughts on “A Day in the Life: Big Corn Island Fishing with a Local”