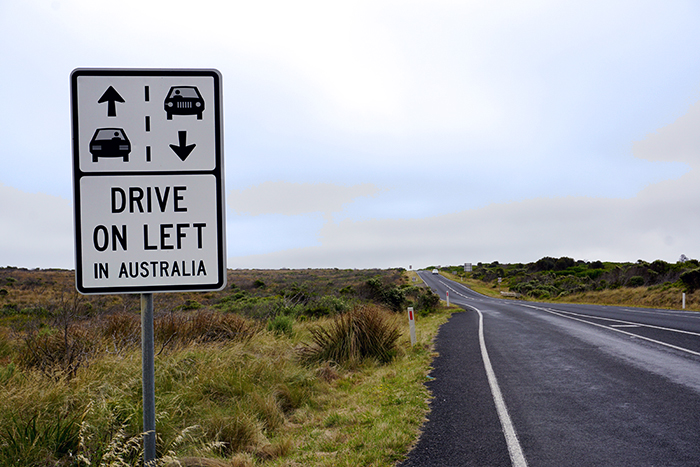 If you’re heading down to Melbourne on your travels around Australia, the Great Ocean Road is inevitably on your itinerary, and rightly so. This gorgeous coastal drive is quintessential Australia. During our two-day trip, we swam in beautiful beaches, got up close to native wildlife and ate our own weight in delicious local produce. We enjoyed our trip so much we couldn’t squeeze it all in one post. So here’s a Great Ocean Road Backpacking Guide Part Two: Lorne to Port Fairy! If you missed Part 1: Melbourne to Lorne you can check it out here.

Another town like Lorne, Apollo Bay is a good place to stop by for lunch or a snack. And just like Lorne is has an array of souvenir shops, nice beaches and waterfall hikes. To be honest I’ve never really spent much time in Apollo Bay, as I’ve always just opted to pass right through after stopping previously in Lorne. I mean it looks great, and I’m sure it’s really nice, but by this stage all you really want to do is hit the other spots before the bus loads of tourists roll up. 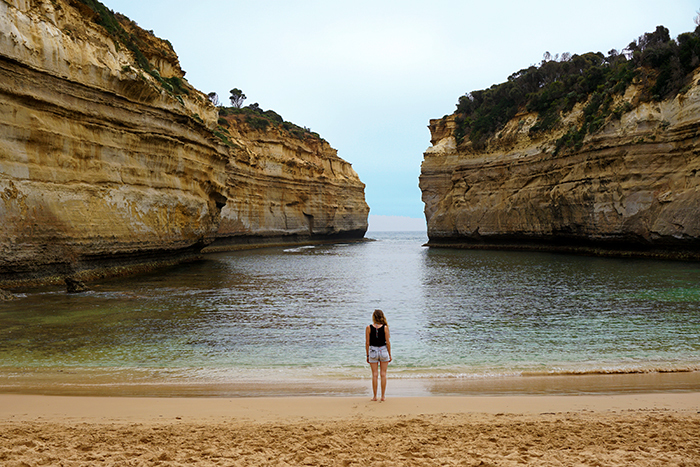 After Apollo Bay you’ll need to cut inland to bypass Cape Otway. Follow the windy road that splits the trees and be sure to take a detour into the National Park via Otway Lighthouse Rd. As you make your way through the park don’t forget to look up. This area is famous for koalas just leisurely chilling in the trees that border the road. Check for other cars pulled up by the side of the road that have spotted them, or keep your eyes peeled.

At the end of the road you’ll hit the Cape Otway Lightstation, which is Australia’s oldest operating mainland lighthouse. It’s been trying to steer ships clear since 1848, and while its done a top job, there are also many unfortunte stories of loss along south-west Victoria’s treacherous shipwreck coast. Experience the full ordeal by taking a tour of the lighthouse and surrounding areas to learn about the history. 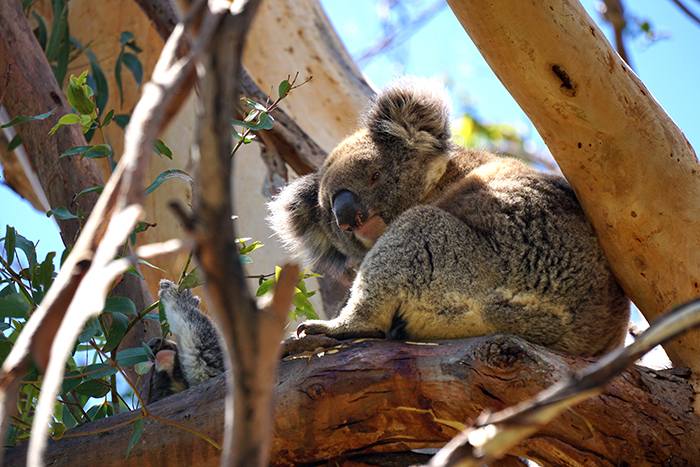 “We were unlickly greeted by a huge Tiger snake, one of Australia’s most deadly!”

Ah yes, the rocks! What everyone came down to see. Don’t be mistaken by thinking that the 12 Apostles are the only delight along the way. Before you get to the main attraction be sure to stop at Gibson Steps, just outside of Princetown. These steps are believed to have been first carved into the cliff face by the original Kirrae Whurrong inhabitants, and since that time were maintained by the early settler Hugh Gibson who would use the access route. After descending down the path, you’ll find yourself on the foot of a wide, serene beach. Many people skip this stop, eager to get to the 12 Apostles, but it’s definitely worth your time. We had the beach almost entirely to ourselves and enjoyed the peaceful calm of the landscape.

Just a few minutes down the road are the car park and visitor centre for the 12 Apostles. There are a couple of different viewing platforms to take in these natural beauties and marvel at their creation. The 12 Apostles are a series of limestone rock formations that have been eroded by centuries of relentless power from the ocean. As an Aussie I might be slightly biased here, but they are absolutely amazing! Well worth the trip down!

There are a couple of tracks that take you to different view points, so be sure to follow them all. And while the path is well constructed and maintained, but don’t be fooled by the presentation, you’re still in the wild. As we were walking back to the car park we were unluckily greeted by a huge tiger snake, one of Australia’s most deadly. It popped its head out of the shrubs on the side and slithered across the path, chilled for a while as a crowded gather, and then took off into the bushes. Despite my calls to stay back and be careful a group of foolhardy tourists chased after it, as a mother almost pushed her pram over it. Seriously, if you see one, stay back!

After the 12 Apostles there are also the sensational rock formations of Loch Ard Gorge, London Bridge, Mutton Island and The Grotto. All with their unique story of either shipwrecks, native wildlife inhabitants or formation. 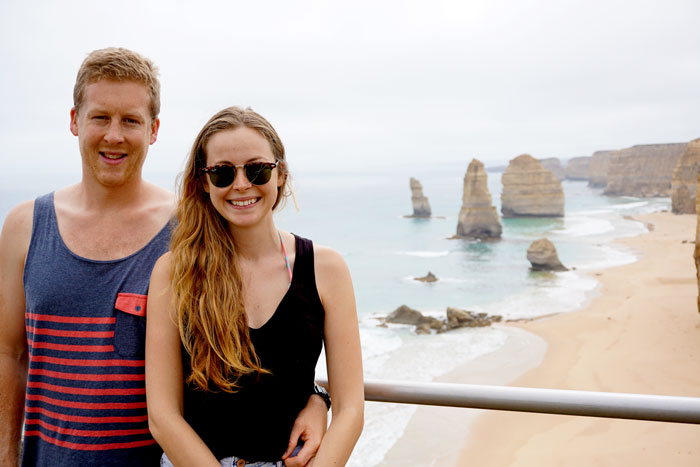 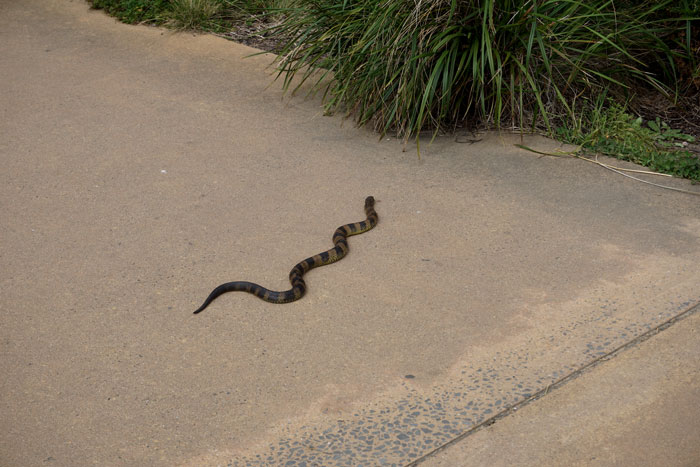 Each town a little bigger than the last. There are some places to sleep, eat and a couple of things to see, but nothing major. Take a little drive around to see what the quieter side of Victoria looks like compared to the hustle and bustle of Melbourne. If you want a decent, but greasy, meal check the appropriately named Frying Nemo at the Port Campbell petrol station to get your fish and chips fix. Well priced and sure to fill your stomach.

South Warrnambool has a surprisingly beautiful beach for a cool down if the sun is out in the afternoon.

“Take a walk though the trails to spy native Australia animals going about their daily business.”

Just 10 minutes out of Warrnambool is an awesome little location of natural wildlife and wonder. The reserve is set around an ancient volcanic crater and has grown up around the natural lake that formed in the middle. Drive in one way and follow the road that snakes its way through the reserve. Stop in the little parking bays and take a walk through the trails to spy native Australian animals going about their daily business. Dawn and dusk are generally the best times to catch the animals, but kangaroos can usually be seen round the clock. We recommend taking a picnic lunch or dinner to compliment the scenic sights and kick back in nature, it’s pretty awesome. 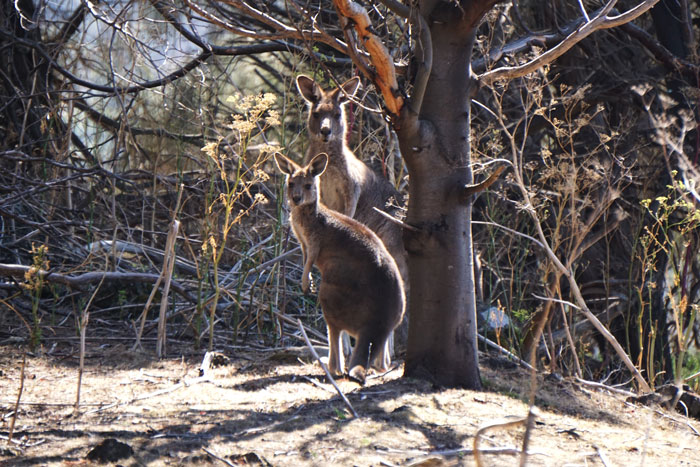 Last on the Great Ocean Road Backpackers Guide is the quaint little town of Port Fairy. Established during early 19th Century this town has come a long way, but it has also made a really good effort to stick to its roots. There’s a couple of fun things to see in the area including Battery Hill, an old fort, and a beautiful port full of fishing ships.

If you’re looking for a drink to unwind from a big day of driving, swing into The Caledonian Inn and have a beer at Victoria’s oldest continually licensed hotel. It first started serving in 1844, and has been going strong ever since. 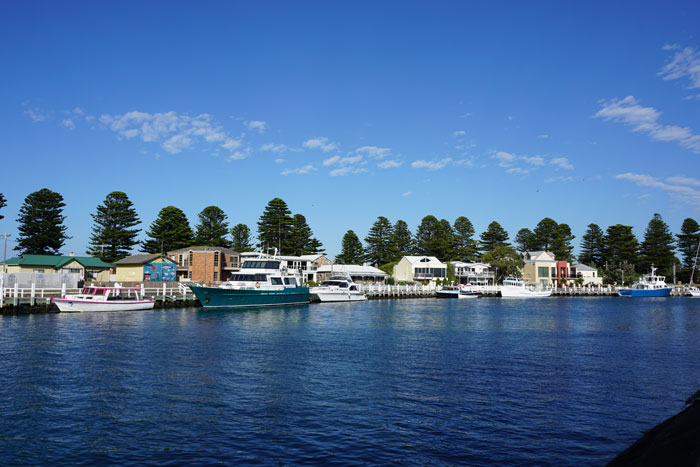 By now you should have a pretty good starting point to explore the amazing sights and places of the Great Ocean Road. There are loads more things to do, but we reckon this should keep you busy for a couple of days. The more time you’re able to spend at each spot the more you’re going to get out of them, so try not to skip past just for the sake of a photo. If you’re short on time pick the things that appeal to you and really enjoy them. If you miss something, so be it! It always gives you a reason to come back again!