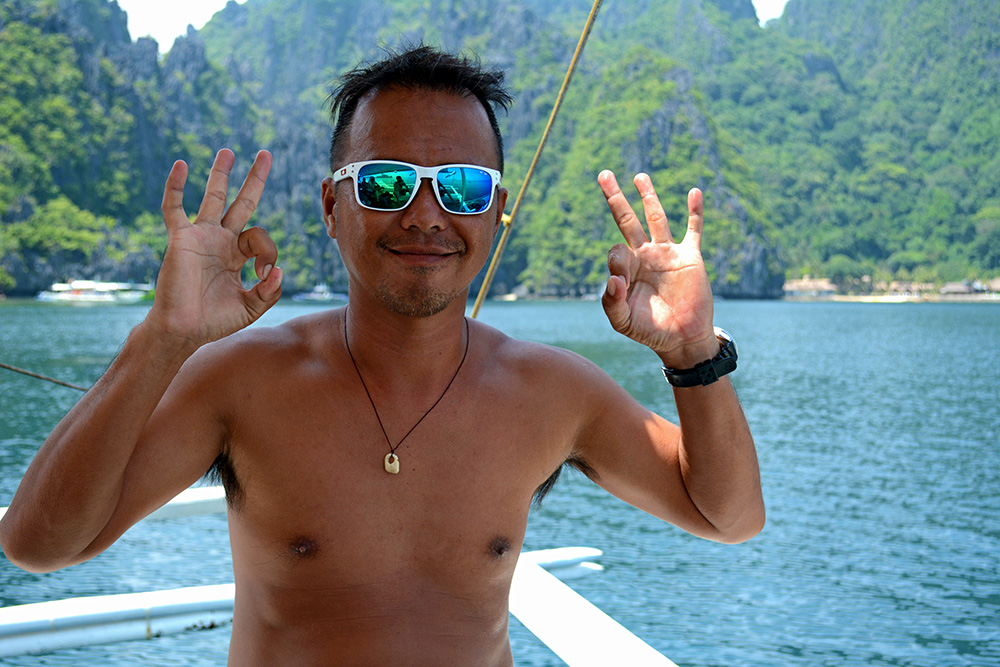 Filipino culture is unique, both in the Philippines and around the world. Famous for their incredible hospitality and polite manners, Filipino’s also have some pretty interesting and uncommon things that they say!

Being a foreigner in the Philippines doesn’t have to be hard, as long as you learn these unique Filipino sayings before you go!

After spending more than seven months in the Philippines, including six months volunteering with Yolanda disaster relief in Tacloban, we got a pretty good understanding of the local culture. Here are of favorite things that Filipinos say to foreigners!

The expression ‘nose bleed’ would have to be one of the most interesting, and unique, things that Filipino’s say. The term refers to the idea that if you think too hard, your nose will start to bleed. Filipino’s usually say this in English, nose bleed in Tagalog translates to balinguyngoy.  The saying is generally used in reference to Filipino’s trying to speak English.

When a Filipino tries to communicate in English, but gets stuck on a word and freezes, people around them will say ‘nosebleed’ and all start to laugh. It’s a lighthearted saying that isn’t used to be mean, but often leaves the person feeling a little embarrassed. 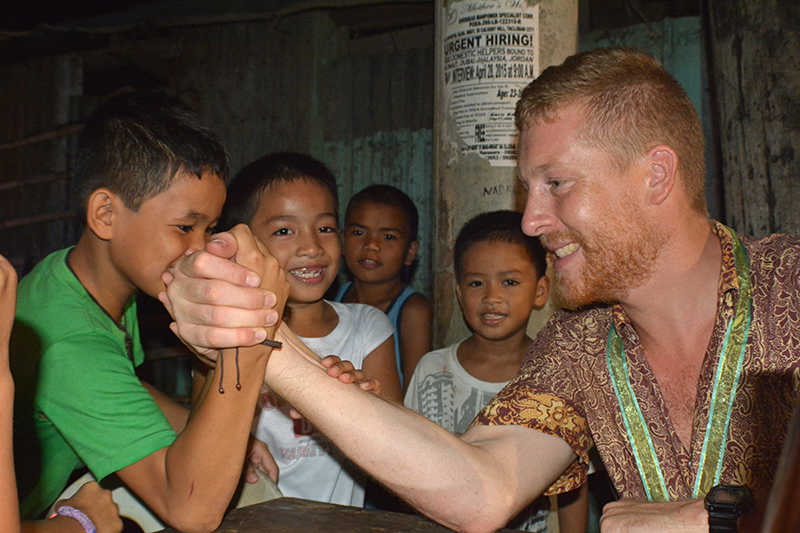 The best way to explain this is through the following anecdote. One time we were at a bus station and a group of curious, young Filipinos slowly started to crowd around us. One confident teen approached us with a few English phrases and started a conversation. When we continued the conversation and asked him a question he suddenly froze, looked at his mates and then ran away as all the others laughed at him and shouted ‘nose bleed, nose bleed’.

In the Philippines, everyone is your friend, so you better get used to hearing this. Filipinos say this all the time, regardless of whether they know you or not. In simple terms, when a Filipino says ‘hey my friend, it is a friendly way of greeting a foreigner and saying hello.

If you get the chance, while they’re zooming past you in a tricycle or shouting at you from afar, yell back the same thing and watch their smile stretch from ear to ear. Filipino’s love to hear foreigners use the same expression as them, so start to greet people you meet with a simple ‘hey my friend’ and watch their response. 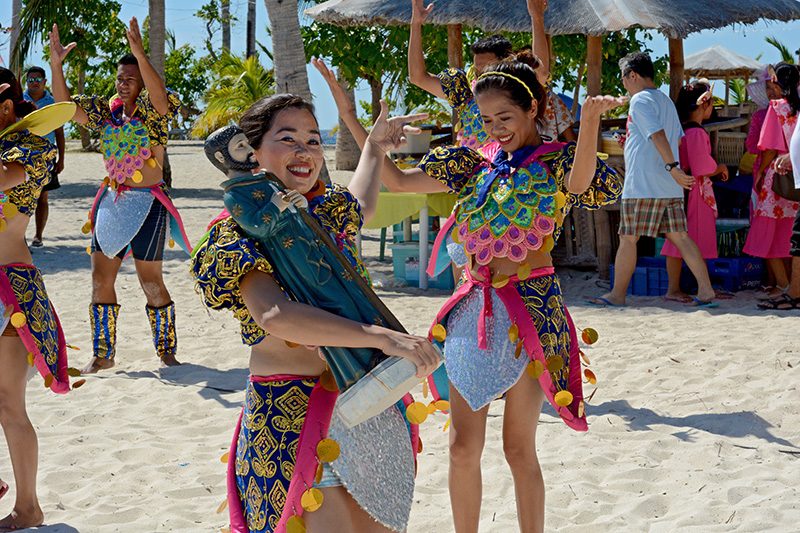 Before traveling to the Philippines we’d heard Filipinos were famous for their politeness and hospitality, but we could never have imagined just how nice everyone was, all the time! Any time you meet or greet someone you can expect a sir or ma’am added onto the end, without fail.

This level of politeness is nation wide, no matter who you’re speaking with or who they’re speaking to. Whether you’re speaking to the municipal government about getting your visa renewed, having your gas pumped at a station or down the local fish market, everyone will greet you with that formality.

After seven months around the Philippines I think we’re now officially the politest backpackers going round Southeast Asia! 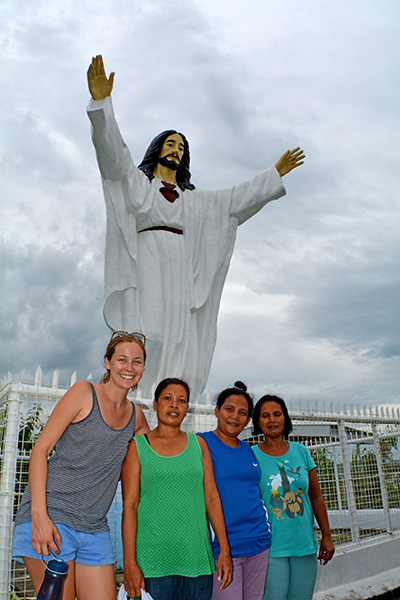 If you’re a white male, get prepared to hear this a lot. Taken from the old World War II nickname for US soldiers (G.I Joe), this now accounts to pretty much any male who looks white and foreign.

It’s not offensive, so don’t be shocked when strangers on the street pass you by and say ‘hey Joe! That being said, it is a little annoying hearing it all the time, especially when you’re living in a town for six months and the locals see you everyday. It’s not like they’re trying to be rude, but when they say ‘hey Joe’, they’re basically calling you out as a white, male from the United States.

It’s a generalization that starts to wear you down eventually! Sometimes to confuse them I just yell back… hey Pinoy! Pinoy is a generalized term for anyone from the Philippines. It holds no negative connotation, but I liked to use it just to mess with the locals.

November 8th 2020 marks seven years since the devastating Super Typhoon Yolanda made landfall on the Philippines. Communities all over the country were destroyed, no harder hit than the city of Tacloban, which was the center of the impact. A million houses were destroyed, many more families displaced and over 6,000 lives were lost. In 2015 we had the opportunity to visit the Philippines and work alongside the people of Tacloban for six months. We worked together on rebuilding the community and the community welcomed us in like their own. Today is a day we show remembrance to all the lives lost and the families that were affected by Yolanda. We send our love to all our friends and we thank you for welcoming us into your country with open arms. Salamat po!

What do Foreigners Think of the Philippines?

Filipinos are super proud people and always love to hear what foreigners think of the Philippines. They’re also fairly receptive to constructive feedback, as long as it’s not too mean. They know their traffic in Manila is terrible and they know vegetarian options are slim, but they also want to know how amazing their island are and how they’re literally the most friendly culture ever!

During all of our Philippines travels, as well as while to Filipinos around the world, locals are always curious to know what foreigners think of the Philippines. While we can’t speak on behalf of everyone, we can say that the majority of travelers we meet absolutely love the Philippines! Along with the gorgeous beaches (try Kalanggaman Island or Sambawam Island) and lovely people, the Philippines offers a rugged and less traveled countryside to explore.

Foreigners love exploring the Philippines, not only for the landscapes, but also to connect with the amazing people. Everywhere you go in the Philippines you’ll meet people welcoming you into their homes and their lives, curious to know more about you and to share a piece of their beautiful country with you.

The first few times we heard this we were super confused. The term ‘what is yours’ literally means, what would you like? It doesn’t really have a translation or meaning, it’s just the way Filipinos ask you what you want. Expect to hear this phrase when you visit a small street store (called a sari-sari store), market stall or sometimes other places where you need to order.

It doesn’t happen all the time, but the first time it did I had no idea what to reply. I just repeated it back to the lady and received some very confused looks as she ushered for her younger English speaking daughter in the back room to come and deal with me.

What is Your Name? Where Are You From?

Most Filipinos speak amazing English, but even if they don’t have the confidence or ability to muster up a conversation, you can be sure they’ll find enough courage to ask you these two questions. 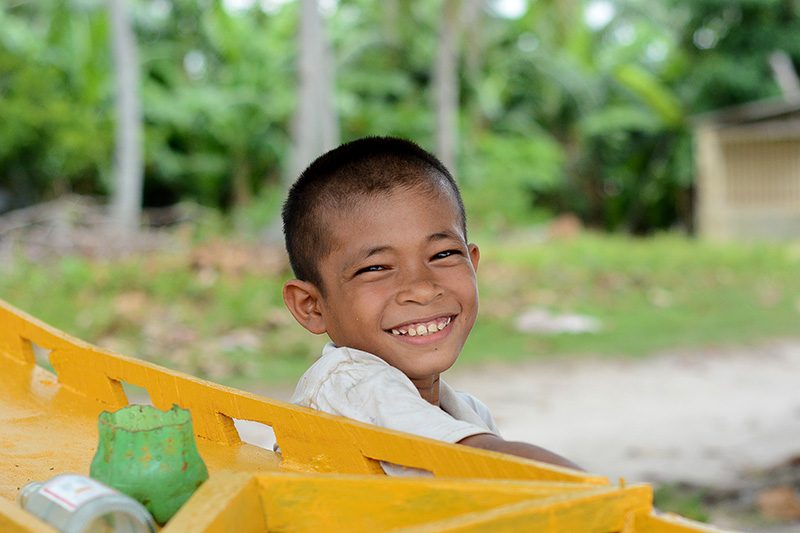 Either Filipinos aren’t restocking their stores very well, or they’re being polite because they don’t understand me, but if you go into any sari-sari, restaurant, grocery, etc. chances are 1 in 5 items will be… out of stock sir.

They’ll always maintain a very polite manner while informing you, but it can be pretty frustrating, especially if you can see the item you’re looking for.

This is a funny one! ‘What else’ is kind of like that scene from Dude Where’s My Car with the Chinese take-out store: and then? And theeeeeeeen? Once you’ve finished ordering something Filipinos like to ask you if you want anything else, multiple times.

‘What else’ pops up more frequently in markets and smaller stores when ordering. Sometimes I end up ordering way too much because I like to see how far they’ll go… they always win! 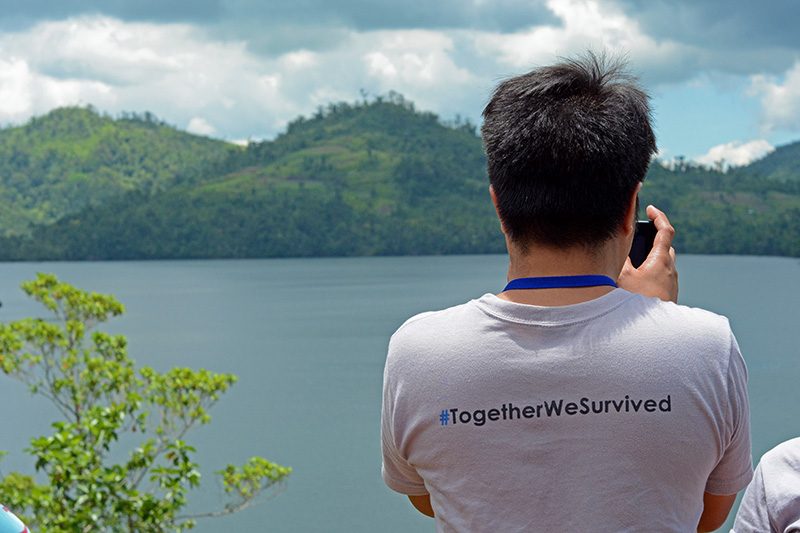 Welcome to My Country

Whether you’ve been in the Philippines for a week, or a year, Filipinos love to greet you and welcome you to their country. Anytime you’re talking to a Filipino they could surprise you by throwing in a ‘welcome to my country’. It’s extremely welcoming and just another example of their hospitality.

You’d be surprised how many times a stranger stopped us in the street or chatted with us in a Jeepney just to welcome us to the Philippines!

When Christine and I came to the Philippines to help with the Yolanda recovery in Tacloban we definitely didn’t come for the praise or the thanks. However, the amount of people who have thanked us for helping their country has truly humbled us. This doesn’t just happen inside the Philippines, this has also happened multiple times when we’ve met Filipinos outside of the Philippines.

Everybody is always curious to know why we spent six months in the Philippines, and when we tell them our story they almost always say a massive heart felt ‘thank you’ for our help.

It’s a great moment that we can share with Filipinos around the world, but now we want to use this opportunity to thank everyone in the Philippines who has made this such an incredible journey and a life changing experience. From the bottom of our heart salamat po! 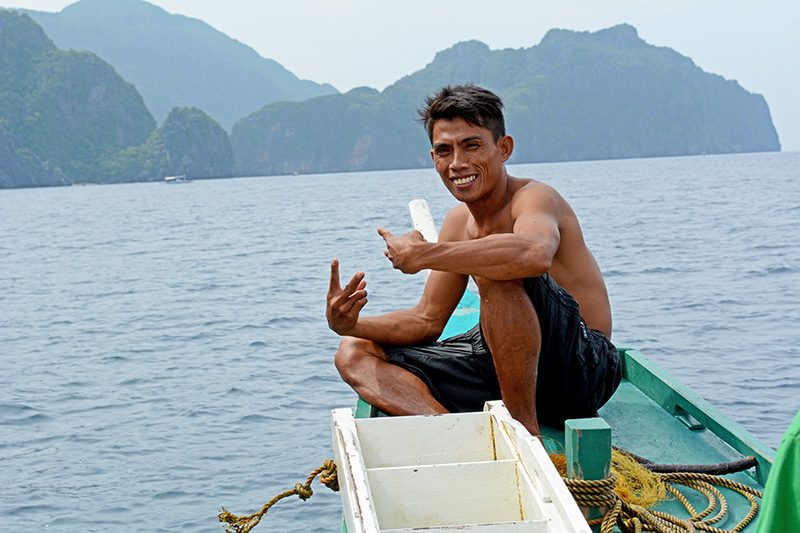